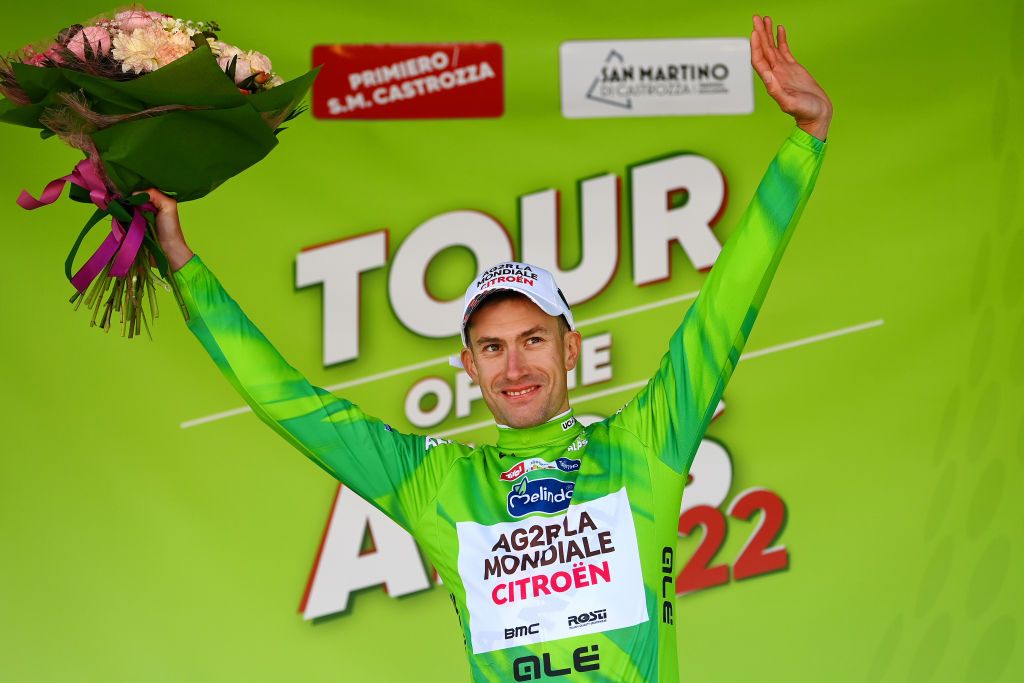 Geoffrey Bouchard landed his first professional victory at the Tour of the Alps on Monday, holding off the chasers with a brave solo effort on stage 1 after finding himself in the breakaway of the day almost by chance.

The Frenchman has won the mountains jersey at the Giro d’Italia and the Vuelta a España with determined, consistent riding for three weeks but finally experienced the unique emotions of victory at the foot of the Dolomites in Primiero/San Martino di Castrozza on stage 1.

Bouchard has been a professional with AG2R Citroën since 2018 but had to fight for his first victory just as he had to fight hard for his place in the peloton.

“Last year I missed out on a stage win in the Giro. I was caught in the last few hundred metres,” he recalled of the stage 9 dirt road finish stage 9 to Campo Felice when Egan Bernal blasted past him to win.

“I managed to turn professional because I worked hard, not because I’m super talented. I’ve done some good things like winning the mountain jerseys but I was missing a win. The goal in cycling is always to win. Now, fortunately, I have won too.

“Maybe I’m not very confident in my ability sometimes but I’ve always worked hard. When I was an under-23 rider I was never in the national team. I still studied at university and worked part-time in Decathlon. Then one year I asked my parents if I could stop working to give my all to my cycling. In 2018 I had a good year and got a contract for AG2R.

“They say a rider’s best years are between 28 and 32. I turned pro late but I’ve progressed every year. I had to learn a lot but now I know who I am and what I want in life: to do everything I can, every day to be able to win. It finally happened today.”

Bouchard revealed that he was actually one of AG2R Citroën’s designated GC riders for the Tour of the Alps. He was not supposed to go on the break; it happened by chance, as he followed a wheel.

“I followed one move and suddenly six riders got away and they let us go,” he explained, as if destiny had stepped in and decided it was his day.

“We had a lot of luck and gained a lot of time in the headwind in the valley. That’s when I started to think of the stage win and focused on doing my best.”

He attacked with Zwiehoff on the late Passo Gobbera climb and then cracked the former German mountain bike race, who then crashed on the descent.

Bouchard still had a two-minute gap on the Ineos-led peloton and began a solo battle for his first victory.

As he passed through the finish area with a 15km valley loop left to ride, he seemed set to stay away. But his lead fell away in the strong winds as Bahrain Victorious also did some big turns on the front to set up Pello Bilbao.

“I gave it my all today. But I never thought about winning the race until the last 200m,” he said.

Bouchard learnt to love racing in Italy last year during the Giro d’Italia as he battled for the blue king of the mountains jersey. He was happy his first victory came on Italian soil but revealed he will not return to the Corsa Rosa this year and is instead aiming for a place in the AG2R Citroën squad for the Tour de France.

“I love how the Italian tifosi come to see the race, not just to see the publicity caravan,” he said, taking a shot at the millions of French spectators that line the roads of the Tour de France, while also revealing his desire to ride the Grand Boucle.

“I love the Giro, even the bad moments in the rain, but I’m French and every French pro rider wants to ride the Tour de France,” he said.

“If I didn’t want to ride the Tour, then I don’t know why I’d go training every day. I’ve ridden the Giro twice and the Vuelta twice, now this year. I think it’s time to go to the Tour. I hope to be part of the AG2R Citroen team that helps Ben O’Connor do as well as possible.”