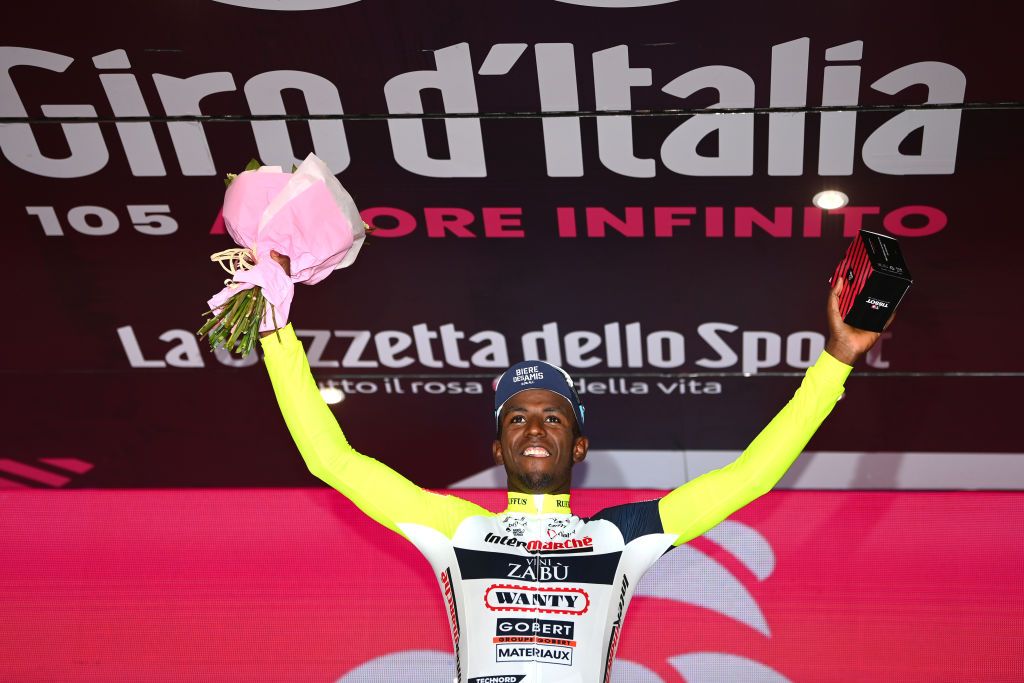 Biniam Girmay (Intermarché-Wanty-Gobert) has been cleared of any permanent vision damage but is not yet able to resume training or racing.

The Tour de France is not part of the Eritrean’s comeback plans, as he makes the World Championships in Australia the focus of the second part of his season.

Biniam Girmay suffered an eye injury when opening the celebratory bottle of Prosecco after winning stage 10 of the Giro d’Italia. The cork flew out and hit his left eye, causing a haemorrhage in the anterior chamber.

After a trip to hospital and overnight checks, it was decided he was not fit to start stage 11 and his Giro was over straight after his breakthrough as the first Black African rider to win a Grand Tour stage.

On Tuesday, a week after the accident, Girmay underwent a new medical screening near his team’s base in Belgium. It was determined that the eye had not healed enough to return to the bike, but that it should be possible within the next 10 days.

“I am feeling better but I am not able to ride my bike just yet. Fortunately, I will not have any after-effects and this makes me happy,” Girmay said. “I would like to thank the doctors for the good advice and my team for the support.”

With a full recovery on the cards, attention turns to a possible comeback for the emerging Eritrean star, who also won Gent-Wevelgem in the spring. There had been speculation that he could switch schedules and make his Tour de France debut but it appears he will stick to the originally-planned structure of his season.

Girmay did similar in the spring in resisting calls for him to ride the Tour of Flanders following his Gent-Wevelgem triumph, instead returning to Eritrea as planned.

“I hope to be able to race soon and resume my race program after some rest at home in Asmara, as it was scheduled before the start of the season,” Girmay said.

Team director Aike Visbeek confirmed that the Tour de France was not on the cards to Belgian newspapers at the Tour of Norway.

“The Tour de France is not an option either. Maybe next year,” Visbeek said, indicating that planned appearances at the Brussels Cycling Classic and Ronde van Limburg at the start of June had been cancelled.

Girmay is expected to return to Europe for the Tour de Pologne at the end of July before building towards the Worlds in Australia, which take place on a hilly course that could suit versatile fast-finishers of his ilk.