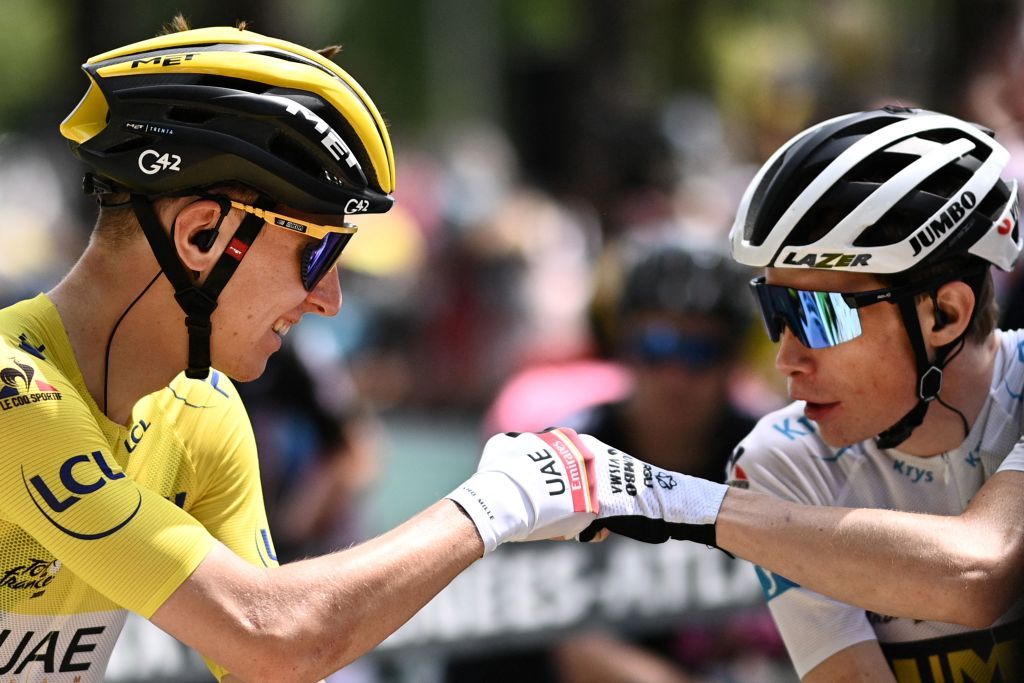 Jonas Vingegaard was thrust into the leadership role at Jumbo-Visma after Primož Roglič was forced out of this Tour de France, but team manager Richard Plugge has insisted that the Dane had been earmarked to race with a certain degree of responsibility even before the race left Brest.

While Roglič was the undisputed leader of the Jumbo-Visma octet, Vingegaard had been delegated to slot into the key role vacated by Tom Dumoulin when he pressed pause on his career earlier this season. Rather than simply ride in support of Roglič, Vingegaard was expected to race in tandem with him against Tadej Pogačar (UAE Team Emirates).

“It’s the same as we already discussed last year with him, he’s not a typical domestique,” Plugge told reporters in Mourenx on Friday. “Jonas has the kick at the end of the race and that’s why he won already last year in Poland and this year at the UAE Tour, so he’s not a domestique.

“Our plan already with him for this Tour de France was to do it together with Primož and to be a big problem for Tadej. We already wanted him to be high on the classification then, so there is no change to our plans for him [in the future].”

Yet while Vingegaard enjoyed a fine spring, picking up second overall behind Roglič at Itzulia Basque Country and winning the Settimana Coppi e Bartali, the consistently high level of his performance throughout this Tour has still come as a surprise. He was the only rider to trouble Pogačar across the three weeks, dropping him atop Mont Ventoux on stage 12, and he showed few obvious signs of flagging in the third week with a string of assured displays in the Pyrenees.

Despite Vingegaard’s eye-catching debut, however, he still reaches the final weekend of the race some 5:45 behind Pogačar in the overall standings. Almost a minute of that deficit came when Vingegaard was caught up in a crash on stage 3, while the majority was accrued when Pogačar put the Tour beyond the reach of everyone else with a remarkable solo attack over the Col de Romme on stage 8.

“I think Jonas lost an extra minute, I believe, in the third stage where Primoz was taken out, but it was really difficult in the Romme stage to follow Pogačar, that was the big difference,” Plugge said. “But afterwards you could see that he could follow Pogačar. To beat him will be really difficult, but if you can follow him, then you can play a tactical game with Primož. There are more ways.”

Vingegaard is effectively guaranteed a podium finish on the Champs-Élyées on Sunday evening and, on the evidence of the stage 5 time trial in Laval, he should also fend off Ineos Grenadiers’ Richard Caparaz (third at 5:51) in Saturday’s time trial to Saint-Émilion to retain second place overall.

This time three years ago, Vingegaard was working every day from dawn to noon icing fish in a factory in Hanstholm on the North Sea Coast, combining employment at ChrisFish with training as an under-23 rider. The following season, he stepped up to WorldTour level with Jumbo-Visma, winning a stage of the Tour de Pologne, and he made further, sizeable strides forward this year.

“Let’s say we’re number eight or nine in the budget ranking, so we have to do it this way, by developing talent,” Plugge said of the rider he signed from Danish Continental squad ColoQuick. “Primož was a little bit older when he came here in terms of age [27 in 2016 – ed.], but he was young as a rider and we also helped him to develop as a big star.

“We like to bring the riders gradually and slowly to become the big star that they have the potential to be. So we have to work on this as well with Jonas. This is a new phase in his career.”

Roglič abandoned the Tour ahead of stage 9 due to the injuries he sustained in his heavy crash on the third day of racing. The Slovenian has since returned to training with a view to competing in both the road race and time trial at the Tokyo Olympic Games, and it also seems possible that he will line up at the Vuelta a España next month in search of a third consecutive overall victory in Madrid.

“He’s good. He’s getting back to training and hopefully he can make it to Tokyo,” Plugge said. “For us, it’s more important that he will be healthy again and maybe he can come to the Vuelta. We have to see how he recovers. But I think he can make Tokyo.”