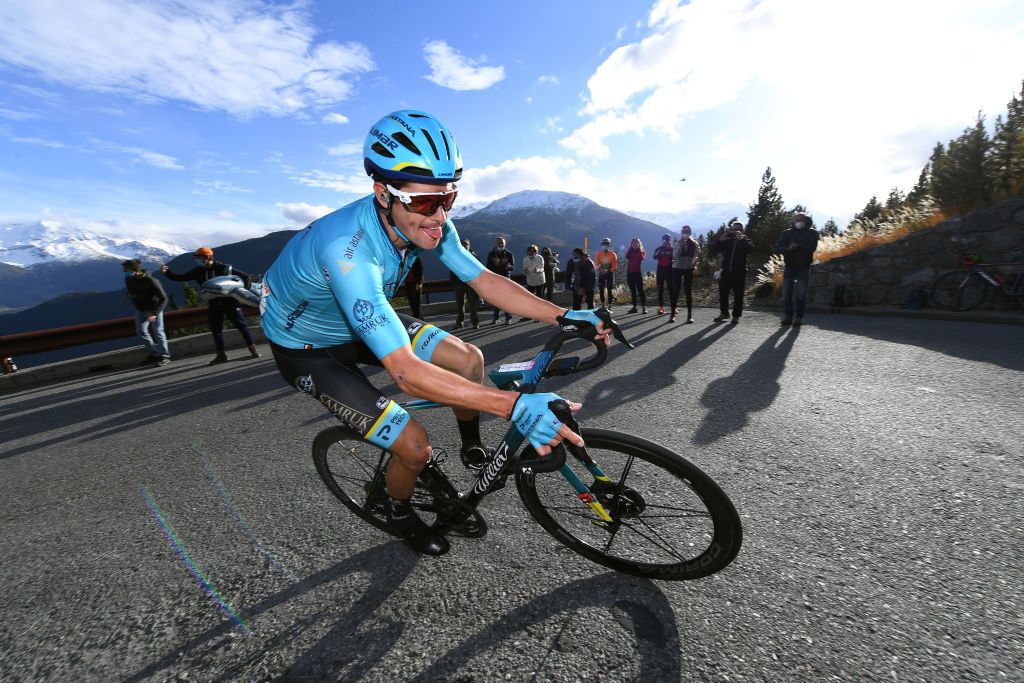 Olympic Games contender Jakob Fuglsang believes that his Tour de France was affected by his second COVID-19 vaccine and that he felt ‘limited’ during the three-week Grand Tour as a result of the inoculation.

The Dane came into the Tour leading Astana-Premier Tech and hoping to target stage wins and prepare for the Tokyo Olympic Games. In Japan, he’s aiming to go one better than he did five years ago in Rio where he won silver behind Greg Van Avermaet.

Speaking to Cycling News during the Tour, the 36-year-old said that his Tour legs were badly affected by the side effects of his second COVID jab and that his pre-Tour form was quickly wiped out.

“My general feeling is okay. I don’t feel that bad but I can’t push myself to my limit,” Fuglsang told Cycling News.

“I feel limited that I’m not able to push my body like I normally I can. That’s meant that I’ve not destroyed myself and I don’t feel as tired.”

Fuglsang finished third overall at the Tour de Suisse behind Richard Carapaz and Rigoberto Urán. Despite not aiming for the overall standings he was still expected to leave a mark on the Tour, but heading into Paris for the final sprint stage he has yet to finish inside the top 20 on any stage with his best result coming on stage 1 when he was 21st behind Julian Alaphilippe. Since then he has worked for teammate Alexey Lutsenko but he rarely threatened in the mountain stages and should finish in 38th overall.

“The only explanation that we can find is that I had my second COVID vaccination after the Tour de Suisse and that it’s limiting me and my body is still working on it. I got my first shot after the Classics and I did tests at a Tenerife training camp and I had high lactate for my power and in Switzerland I was good,” he said.

“Then I got the second shot and a second test in the race showed the same results that I had in Tenerife, that my numbers are basically where they are in December or even worse.  That’s just how it is but at some point, it will go away and that’s what we’re waiting for.

“In Suisse I was good, so I’m just counting the days because hopefully, I’m good for the Olympics. I just have to be patient and give my best. It’s been frustrating because things looked to be perfect before the race. In Suisse, if you take away the time trials I was up there with Carapaz and Urán so I think without this problem I would be able to have gone for stages in the Tour. That’s just part of the game and I have to wait for everything to go back to normal.”

With the Tokyo road race a week away, Fuglsang will be hoping to rediscover his best legs before it’s too late. He went to recon the route back in 2019 and with wins in Il Lombardia and Liège-Bastogne-Liège he certainly has the pedigree to challenge. He was also second in Rio five years ago, and the tough course in Tokyo looks ideally suited to his nature as an aggressive rider.

“I went in October 2019 and I went to look at the parcours after I did the Saitama Criterium. I have an idea of what to expect and I think it’s harder than Rio. The climb that we have with about 35km to the finish, that’s a proper climb and super steep. It’s for climbers. At Rio you could maybe survive a little better so Tokyo will be a harder race,” he told Cyclingews.

“It would be a huge achievement and for sure the biggest one day win of my career. I know it’s going to be difficult and a huge fight but I hope that the right path is that I’m not 100 per cent for the Tour and then it turns around for the Olympics. Winning would be huge, even if it’s a title that only lasts three years. Three years is still a lot better than no years.”