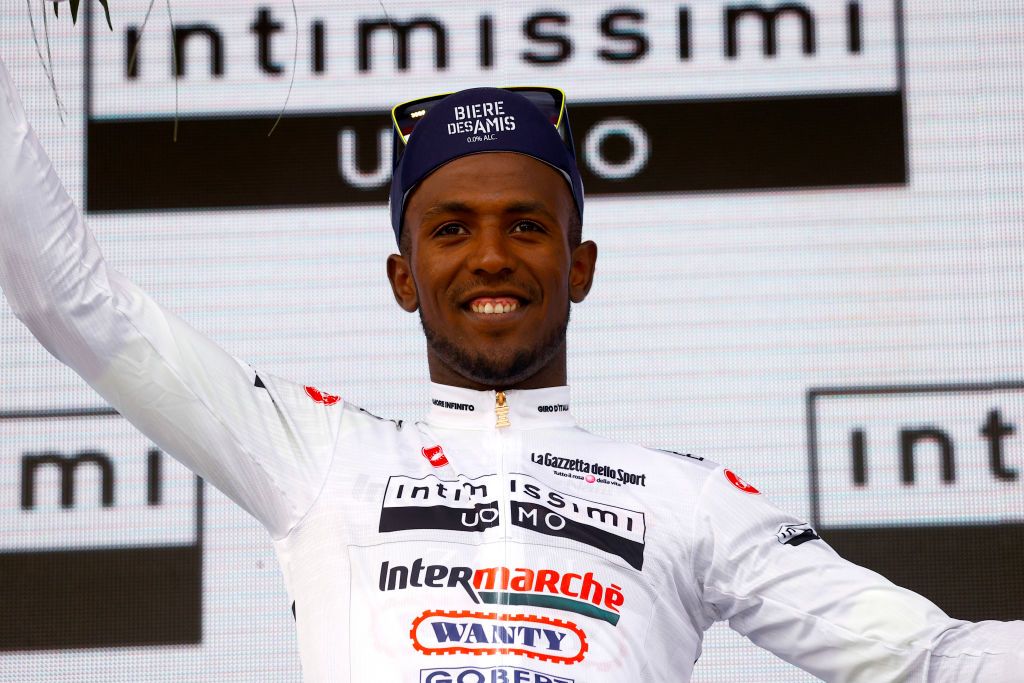 A duel delayed. When Biniam Girmay was busy making history and winning Gent-Wevelgem, Mathieu van der Poel was feeling his way back into action at the Settimana Coppi e Bartali. When Van der Poel was notching up his second Tour of Flanders victory, Girmay was already at home in Eritrea.

The prize fight finally takes place at the Giro d’Italia. Round one fell to Van der Poel, who outlasted Girmay on the uphill finale at Visegrád to take the first maglia rosa of the race. On Friday’s evidence, mind, their bout has some way to go yet. This Giro may only be the beginning.

Van der Poel was the favourite to take the honours in Visegrád and Girmay was the man most fancied to challenge him, and both men lived up to their billing. As in Wevelgem, Girmay showed a certain fearlessness when faced with his first-ever Grand Tour appearance, almost nonchalantly opening his sprint from distance. Only one man, Van der Poel, could come around him.

“I started at almost 300 metres to go. I think it was on the limit and Van der Poel was a bit stronger today,” Girmay told reporters after he had wheeled to a halt past the finish. “But I’m really happy, because to be second in your first Grand Tour stage to a big champion like Mathieu van der Poel is something special.”

The third man in the pre-race was Caleb Ewan (Lotto Soudal), and the Australian was straining to stay in the mix in the closing metres until he clipped Girmay’s rear wheel and crashed within sight of the line. Girmay felt the bump just as he was accelerating in a bid to get back on terms with Van der Poel, though he downplayed the idea that it had affected his effort.

“To be honest, I didn’t see. I just felt something touch my wheel,” said Girmay.  “I was just starting my sprint and I felt somebody touch me from behind, but I didn’t see what happened.”

Girmay was seeking to become the first Black African rider to win a stage of a Grand Tour, and on the evidence of his brief career to date, he seems likely to assume that place in history sooner rather than later, and perhaps on this very Giro. On Friday evening, he preferred to think of the opportunities ahead rather than dwell on the maglia rosa that had just passed him by. For now, the 22-year-old must content himself with a stint in the white jersey of best young rider.

“We just came here to win the stage, not to wear the pink jersey. Today is one day and there are others,” Girmay said. “We will see, but I’m feeling good motivation for the next days. There are several stages suited to me, so I think we will see in next days.”

On entering the mixed zone after the podium ceremony, Van der Poel made a point of walking over to Girmay to compliment him on his sprint, noting that he hadn’t the strength to lift his arms on the finish line.

Girmay, for his part, gently dismissed the idea that he was in any way surprised to have been the man to push Van der Poel the closest on this finale. His decision to return to Eritrea immediately after Gent-Wevelgem, after all, was taken partly with the Giro and this very stage in mind.

“I think we talked already before one or two months ago about this stage. We expected to do something,” said Girmay, whose Intermarché squad were prominent in attempting to control the peloton on the 5km drag towards the finish.

“It was really hard, especially in the last 3 or 4k, but for me I need more high speed and a hard race, so I tried to tell my team to make a bit of movement. In the end, I think I started the sprint a bit early, like 300m to go, but generally I think it was a great job.”

The beauty of the Giro is that Girmay will get to do it all over again, starting in two days’ time at Balatonfured. Round two against Van der Poel awaits on the shores of Lake Balaton.

“He’s always in good shape and for me it was the first time in a Grand Tour,” Girmay said. “For me, this is only the beginning, so we will see in the future.”