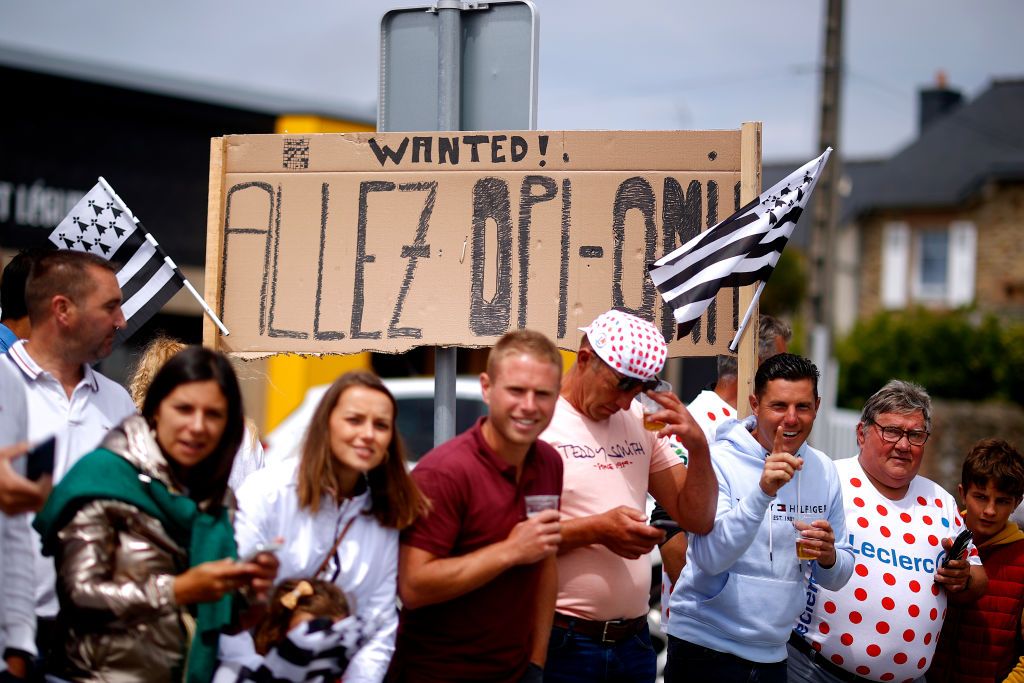 Five months on from sparking a horrific crash on the opening Tour de France stage, a 31-year-old woman has been given a fine of €1,200 and €500 in damages in a criminal court in Brest for “endangering the life of others” and “willful injury” but avoided the suggested four-month suspended prison sentence.

The incident occurred with around 45km to go on the first stage near Sizun, when the woman, with her back to the oncoming peloton, held up a sign reading “Allez Opi-Omi” with part of the board extending into the road.

Tony Martin, leading the peloton in pursuit of the breakaway, working for Jumbo-Visma leader Primož Roglič and stage contender Wout van Aert, hit the sign and crashed hard, taking down most of his teammates and almost a third of the bunch. Roglič, one of the main overall contenders, would later abandon, as would Marc Soler (Movistar).

While the wreck was the highest profile of the stage, one that came inside the last 10 kilometres did far more damage. Between the two, 21 riders were injured and four left the race after the first stage.

Although he was able to continue through stage 11, Martin opted to retire, citing the lack of improvements in rider safety.

At a hearing in October, the downcast woman insisted she did not mean to cause harm, saying “It was really so unintentional”. She had initially gone into hiding after the news of the crash was widely reported in the mainstream media and she was mocked and vilified on social media. She eventually came forward to face the charges.

The Tour de France organisers ASO backed down on threats to sue, while the CPA pressed civil charges to set an example, asking for a symbolic €1 fine, which was instead awarded to the French riders’ union, the UNCP.

SOURCE: CyclingNews   (go to source)
AUTHOR: Cycling News staff
All copyrights for this article, including images, are reserved to the original source and/or creator(s).