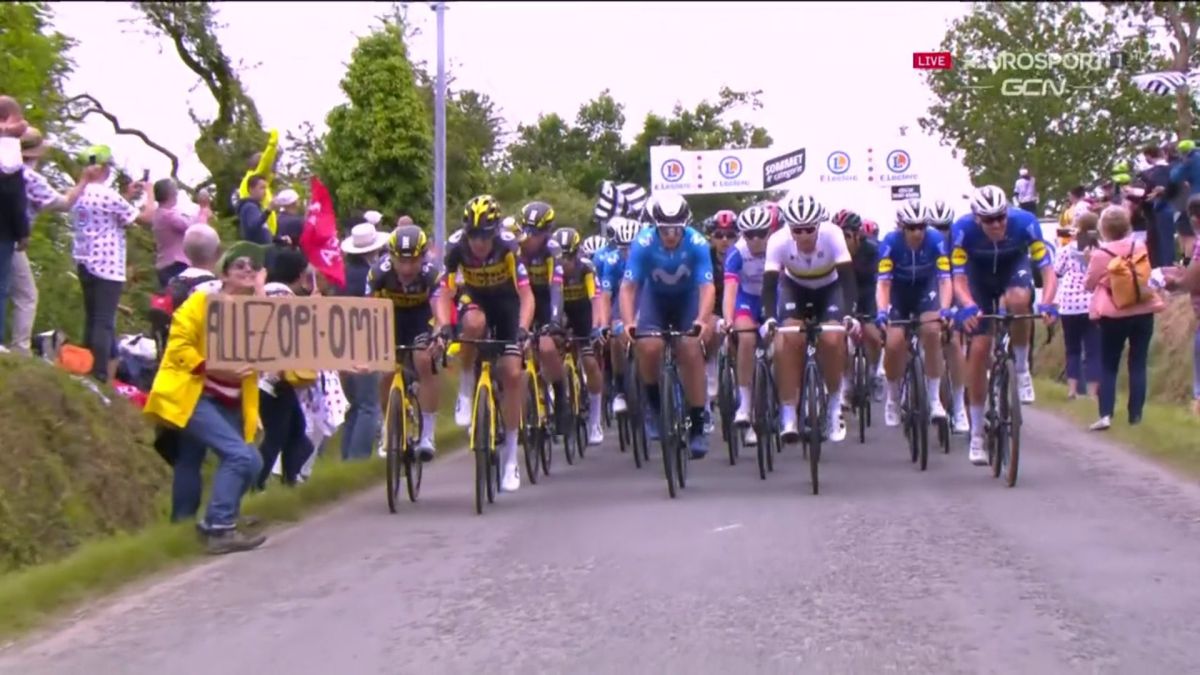 The spectator who caused a mass crash on stage 1 at the Tour de France this summer will be prosecuted in a criminal court of Brest, Finistère, on October 14, according to a report in Ouest France Tuesday.

The 31-year-old woman is being prosecuted for “endangering others” and for “involuntary injuries” resulting in incapacity for work “not exceeding 3 months”, according to Ouest France.

The spectator was standing on the side of the road during stage 1 of the Tour de France on June 26, and holding a sign that read ‘Allez Opi-Omi’ (a German term of endearment for grandparents).

She had her back to the peloton and the sign was sticking out into the road at handlebar height, causing Tony Martin (Jumbo-Visma) to collide with it, sparking a mass crash through the main field.

Tour de France organiser ASO initially indicated that it aimed to sue the spectator who caused the crash, although she was unidentified at that time because she had left the scene following the incident. However, it later withdrew its threat with race director Christian Prudhomme confirming, “We are withdrawing our complaint. The story has been blown out of proportion but we wish to remind everyone of the safety rules on the race.”

The Gendarmerie du Finistère had put out a call for witnesses in a Facebook post, in which they indicated that a judicial investigation had been opened.

Four days after the incident, the woman turned herself into police custody in Landerneau, according to RTL. She was charged with two offences, the first being ‘endangering others through a manifestly deliberate violation of a duty of prudence or safety’ and, as a consequence, ‘involuntarily causing injuries that lead to an inability to work for up to three months’.

Upon her release,  French police described her as being “ashamed” and “frightened”.

According to L’Equipe, the spectator faced, at minimum, a fine of €1,500 for an involuntary injury charge caused by a lack of safe behaviour or prudence, provided the injuries sustained by those affected did not lead to more than three months of inability.

However, the French news outlet also reported that sanctions could be stronger if additional complaints were made by the those involved. “In this case, according to article 222-20 of the Penal Code, the spectator would risk a maximum penalty of one year of imprisonment as well as a fine of 15,000 euros,” reported L’Equipe.

The CPA maintained its complaint on the case saying,  “It was a really irresponsible action,” stated Laura Mora, Secretary General of the CPA in a report to AFP.

“The riders had to suffer very serious consequences. We are not here to ask for money, but to ask for more respect and responsibility from the public.”