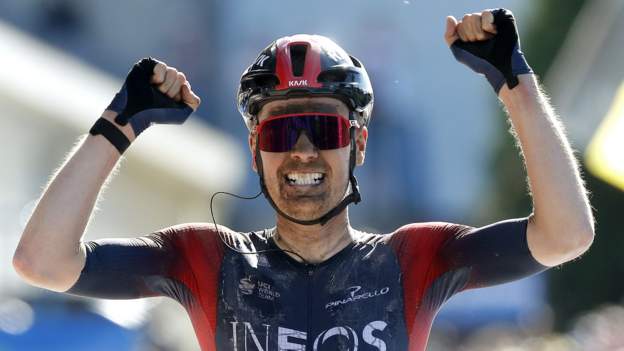 Dylan van Baarle won the fastest edition of the men’s one-day classic Paris-Roubaix to secure a first title in the race for Ineos Grenadiers.

The Dutchman’s solo attack with 19km to go saw him seal an emphatic victory in five hours 37 minutes.

Yves Lampaert had been in contention for a podium finish but suffered a heavy fall after a clipping a spectator with 8km remaining.

Van Baarle, who finished second in the Tour of Flanders earlier this month, caught up with the leading pack with 25km to go.

The 29-year-old then accelerated on a cobbled section just 6km later to give himself a dominant lead.

“I could not believe it when I went onto the velodrome,” said Van Baarle.

“I looked on the other side to see if there were other guys but it was just me.”

Quick-Step Alpha Vinyl rider Lampaert, who conceded after the race that he was only racing for third, clipped the hand of a spectator while on a cobbled section.

His bike flipped and, despite being able to resume racing, the Belgian could only finish 10th.