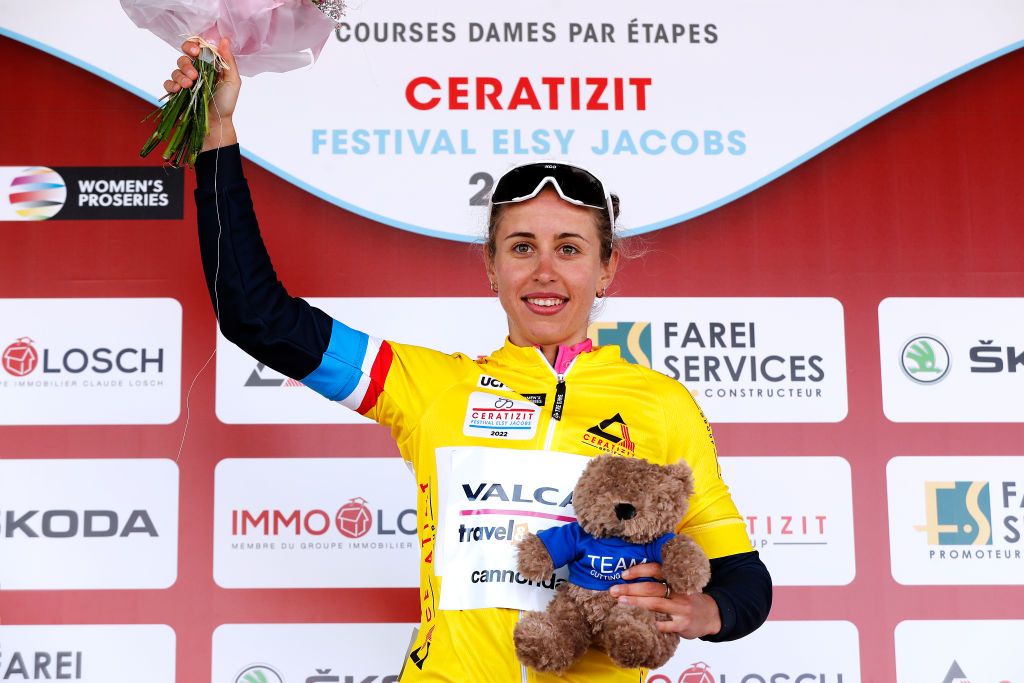 Silvia Persico (Valcar-Travel & Service) is following in the wheel tracks of her Italian compatriots that are dominating the road racing scene this spring.

The 24-year-old has enjoyed a run of success with a recent victory at Gran Premio della Liberazione on April 25. That success was quickly followed by third place in the prologue and second place, behind compatriot Marta Bastianelli, on stage 1 at Festival Elsy Jacobs.

Persico is currently leading the overall classification with the same time as runner-up Demi Vollering (SD Worx) and seven seconds ahead of Bastianelli.

“Today I was feeling good I tried to win but Marta was stronger than me in the sprint,” said Persico, who initially wasn’t sure if her efforts were enough to take the overall race lead.

“I don’t know if I took the jersey for the general classification but I am happy with my team because today they worked for me all day.”

Persico is the Italian cyclo-cross national champion and was the revelation at the UCI Cyclo-cross World Chapmionships in January in Fayetteville as part of the winning team that secured the victory in the opening test team relay. She went on to secure the bronze medal in the elite women’s event behind Dutch riders, world champion Marianne Vos and silver medallist Lucinda Brand.

A contracted rider with the Valcar-Travel & Service team since 2017, Persico brought her off-road from into the Spring Classics where she finished 10th at Strade Bianche, 12th at Ronde van Drenthe, 8th at Trofeo Alfredo Binda, 9th at Gent-Wevelgem, 11th at Tour of Flanders and 7th at Brabantse Pijl.

After finishing third in the prologue at Festival Elsy Jacobs, Persico admitted that while the 2.2km route suited her strengths, she was not confident should would finish in such a high placing.

“I knew that the prologue route suited me, since there were so many corners. However, I didn’t expect to finish in third place: on the eve, the sensations were not superlative,” Persico said.

“We came here to make the most of it. Stages and general classification, we do not make any differences. As for me, I will try to rank, but I would like to savour the taste of success as it happened in Rome [Gran Premio della Liberazione].

“Maybe the last stage 2 in Garnich is the one that suits me best: already last year I closed in fourth place.”

The race concludes at stage 2’s 109.3km race in Garnich. A fourth place last year could indeed become a victory for Persico in Sunday’s finale, in her attempt to now also win the overall title at Festival Elsy Jacobs.