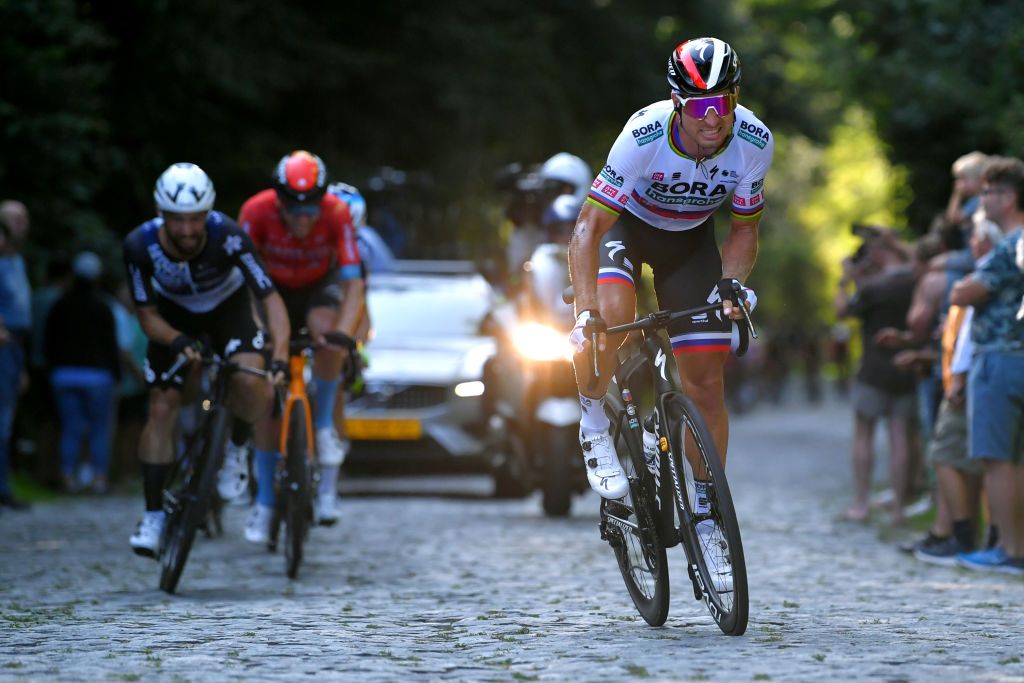 After making history as the first man to take three World Championships road race victories in a row back in 2017, Peter Sagan lines up in Flanders once again bidding to break records and become the first man to win four rainbow jerseys on the road.

Having won gold medals in Richmond, Doha and Bergen, Sagan’s follow-up attempts at glory have seen him DNF on the climber’s course in Innsbruck, and, two years ago, place fifth in Harrogate. Sunday’s race marks a return to the Worlds for the Slovak, having missed last year’s race in Imola.

Speaking ahead of the race on Saturday, the 31-year-old said he has nothing left to prove at the Worlds and compared the hilly course to the Tour of Flanders and Brabantse Pijl – two races he has won in the past.

“I don’t think I have anything left to prove to myself or others,” Sagan said. “I’ve always said that the hardest thing is once you’ve reached the top is to keep this level, year after year, for a long time.

“It will be an interesting race. Sometimes it looks like a bit like the Tour of Flanders, but it’s different. With the cobblestone climbs and the local city circuit, it’s very technical. The course covers some of the same roads, but it’s been a long time since I rode Brabantse Pijl.”

Sagan, who reconned the course after the Benelux Tour earlier this month and then again earlier this week, said that one of the keys to success during Sunday’s 268.3-kilometre race will be staying towards the front of the peloton and avoid crashing.

The junior and U23 races this week have been marred by numerous crashes, and Sagan said he expected it to be no different during the elite men’s race.

“We arrived on Wednesday night, so we had time to look at the circuits again when they closed the traffic in the city. The profile of the course should be good, it is technical, it will be a dynamic race,” he said.

“The key to success will be to avoid falling and ride in front, saving as much energy as possible, because many times you go from a wide road to a narrow one.

“Everyone wants to ride at the front, so it will be quite dangerous. I think there will be a lot of falls, so we will also need luck. I hope that everything will go according to plan.”

As well as fighting against favourites such as Wout van Aert (Belgium), Sonny Colbrelli (Italy), Mathieu van der Poel (the Netherlands), and reigning champion Julian Alaphilippe (France), Sagan will be battling with the past.

He currently lies on three Worlds road race victories alongside Alfredo Binda, Rik Van Steenbergen, Eddy Merckx, and Oscar Freire in joint-first place in the medal rankings. Success on Sunday would see him go clear as a record breaker. Sagan refrained from talking up his own chances at victory, however.

“The race in Flanders is always special. I don’t know if I will win on Sunday or if I will finish 30th. I don’t even know if I will be there when there is a sprint for the win, but I know I will do my best.

“I have a chance on this course. I might have another shot in Australia [next year]. If I win another one, I will be the record holder.”