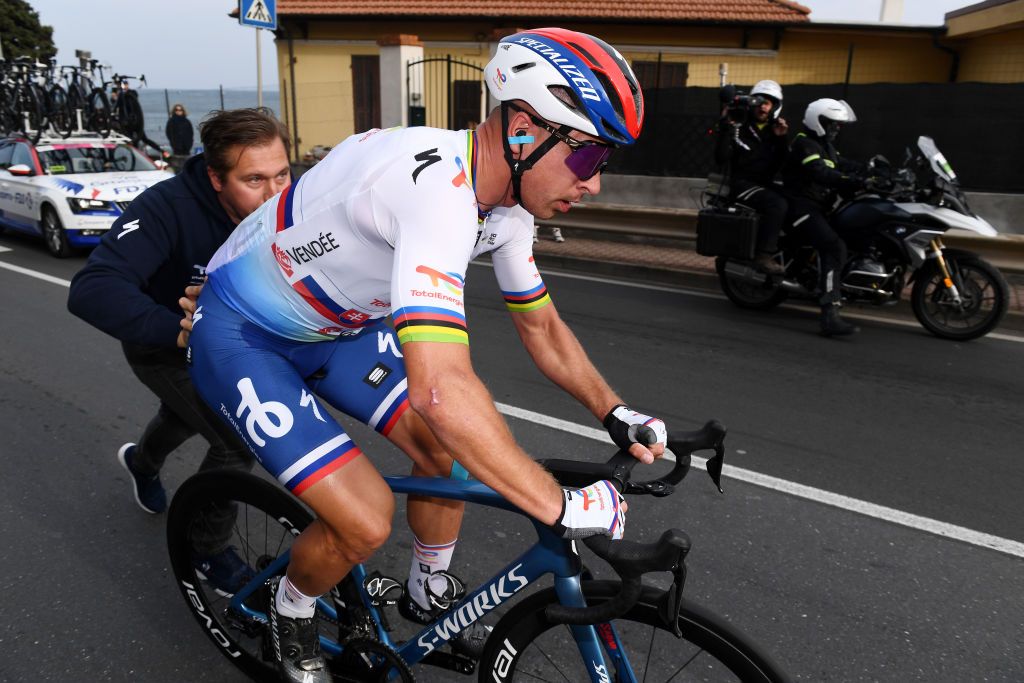 Peter Sagan is unlikely to ride Paris-Roubaix and will undergo further tests in France as he continues to fight a sense of fatigue that leaves him unable to race and train as he would like.

The TotalEnergies rider abandoned the Circuit de la Sarthe on Wednesday and has now returned to France for further testing.

“I don’t feel well, I often feel tired and I’ve got to find out why,” Sagan told La Gazzetta dello Sport.

Sagan tested positive for COVID-19 for a second time in January and then was ill during Tirreno-Adriatico. He was forced to miss a key block of pre-season training due to COVID-19 but hoped to slowly find his form. However, he failed to finish Gent-Wevelgem and so pulled out of the Tour of Flanders. There appears little sense in him riding Paris-Roubaix with his health now the number one priority.

Sagan passed a series of tests and check-ups before he returned to racing and training after COVID-19 but has been unable to find a decent level of fitness.

“Peter hasn’t been well recently. His legs hurt far more than normally and he finds it difficult to make big efforts. He sometimes feels light headed and is often really tired,” Gabriele Ubaldi, his friend and press officer, told Tuttobiciweb.

“Peter underwent some tests with the team doctor Louis Noisette last week but has gone to France again to undergo further tests. There’s definitely something wrong because Peter has never been like this before, even when he wasn’t on form.”

Sagan joined TotalEnergies this year after five seasons at Bora-Hansgrohe. He is now 32 and has been successful at WorldTour level for a decade but has insisted he is still motivated to race and hungry to win again.

La Gazzetta dello Sport calculated that Sagan has achieved 500 top-ten results and 300 podium places while riding around a 1000 races during his professional career. He has won 119 races, including three world titles, seven points jerseys at the Tour de France and victories at Paris-Roubaix in 2018 and the Tour of Flanders in 2016.

His success began to decline in 2019, but in 2021 he won five races, including a stage at the Volta a Catalunya and a stage at the Giro d’Italia. He struggled at the Tour de France and eventually abandoned before stage 12 after being taken out by Caleb Ewan’s crash during the stage 3 sprint.

Sagan is one of many riders to be hit by a combination of COVID-19 and then illness. Gianni Moscon ended his spring Classic campaign after the Tour of Flanders due to a lack of form, while new Astana Qazaqstan teammate Vincenzo Nibali is back in training after missing much of March. Filippo Ganna quit the Circuit de la Sarthe on Friday and is still trying to find his best form after falling ill on the eve of Milan-San Remo.

Wout van Aert was forced to miss the Tour of Flanders after catching COVID-19 and is unlikely to ride Paris-Roubaix. Most teams have been hit by COVID-19 and illness, forcing them to constantly shuffle their rosters.

Sagan is hoping to first understand and resolve his health problems before returning to training and racing. TotalEnergies will not ride the Giro d’Italia and so Sagan will work to return to his best for the Tour de France.