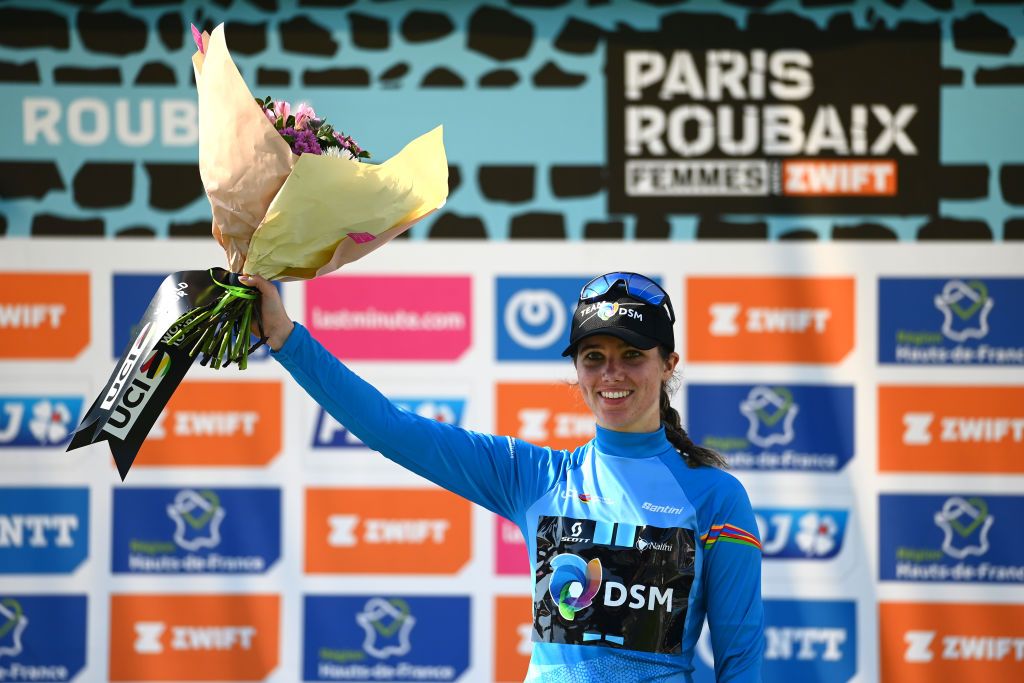 Pfeiffer Georgi (Team DSM) captured a top-10 finish in the second edition of Paris-Roubaix Femmes on Saturday, with the British Champion saying the unexpected result has made her look ahead to future editions of the tough cobbled race with a different attitude.

“I’m really, really happy actually. I didn’t expect to get a top 10 in Roubaix. I’m still quite young so it gave me a lot of confidence actually. It’s a race that I would really love to target in future,” Georgi told reporters in the velodrome in Roubaix.

The ninth place for the 21-year-old Team DSM rider also meant she stood on the podium following Paris-Roubaix Femmes as the Women’s WorldTour youth leader, with Georgi wearing the blue leader’s jersey as event photographers and press surrounded the presentation stage.

It was her second outing at Paris-Roubaix, as she was one of the 129 history-making women who competed in the inaugural edition last October. In that edition, the route was flooded in sections with mud splayed across the 17 slippery cobble sectors due to seasonal rain and cold weather conditions.

She said the bad weather made last year’s race much more of a challenge and that the two races were nothing alike. “Yeah, not in the slightest. Last year, with the carnage and crashes, I can’t say it was similar. It definitely was like a new race [today],” she said.

The women raced 124km, slightly longer than last year due to an additional opening circuit in Deinan. However, the rest of the route was the same with 17 pavé sectors raced under dry and sunny conditions.

Georgi was one of the strongest riders in the field, present near the front of the main field for much of the race. She finished in the third group 2:22 behind solo race winner Elisa Longo Borghini (Trek-Segafredo).

She said her knowledge of the cobbles helped her performance this time around.

“When I raced it last year, I hadn’t done a recon at all. The first time I saw the sectors was in the race, so I came into it [this year] with more knowledge and coming into it with a lot more confidence and feeling a lot more powerful. I think each year the knowledge [gained] of the cobbles will increase and the race [performance] will improve.”

Despite Paris-Roubaix being one of the toughest races on the Women’s WorldTour, Georgi said she’s looking forward to future editions.

“It was really hard. I loved every minute of it, actually.”