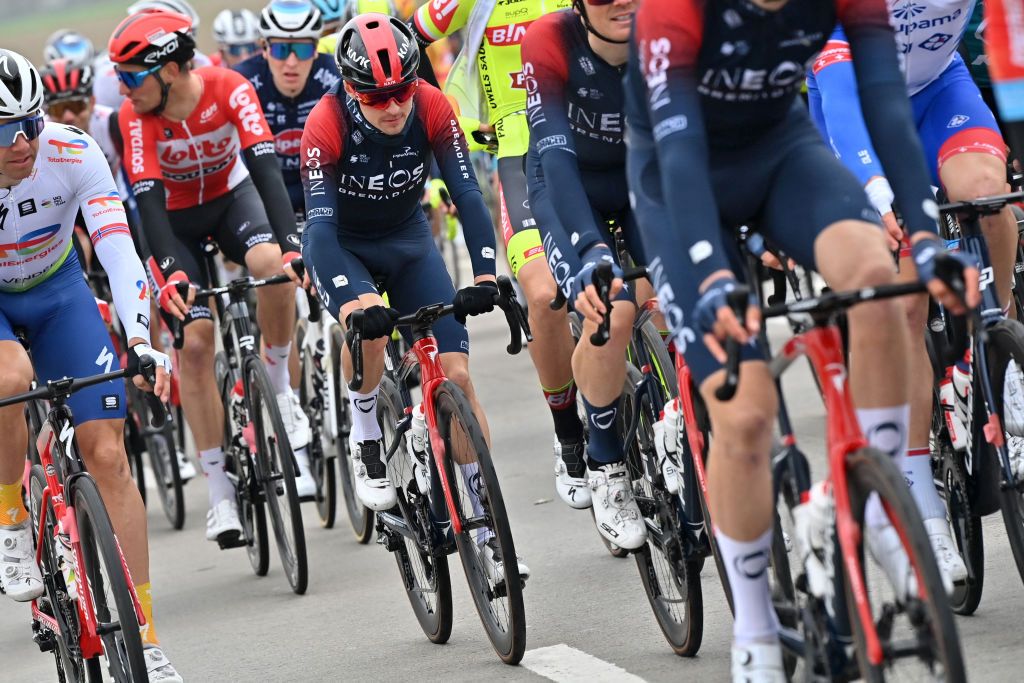 Tom Pidcock’s busy Spring schedule didn’t originally include Gent-Wevelgem, but after being laid low by a stomach problem in recent weeks, the Briton took the start line in Ypres on Sunday to rack up some additional race miles ahead of next weekend’s Tour of Flanders.

The Ineos Grenadiers leader was forced to miss Strade Bianche, his first stated objective of the road season, due to a stomach virus. Although he returned to full training afterwards, he was afflicted by the issue once again at Milan-San Remo, where he abandoned after he was distanced on the Capo Berta.

“It hit me quite badly before Strade, and it took me a long time to recover,” Pidcock told reporters, including Cycling News, at Ypres’ striking Grote Markt on Sunday morning.

“I thought I was ok going into San Remo, but then obviously I wasn’t, with extra sugars and pressure on the stomach. I think there’s not really something magic you can do to fix it, but I think now it should be ok.

“I was going really well before San Remo. That’s why I was a bit surprised and also quite disappointed afterwards.”

Pidcock was initially due to make his return to competition at Dwars door Vlaanderen on Wednesday, but he was a surprise late addition to the Ineos line-up for Gent-Wevelgem when it was announced on Saturday afternoon.

He downplayed the idea that he would seek to take the race to favourite at E3 Saxo Bank Classic winner Wout van Aert (Jumbo-Visma). At Omloop Het Nieuwsblad in February, Pidcock caught the eye with his offensive over the Berendries in the company of the eventual winner Van Aert.

“Today is about trying to follow. It’s not about making the race today,” Pidcock said. “I’m not 100 per cent, but I feel good, I’m in good shape. I think the main thing is to finish today with a good feeling. That’s the idea. Getting another race in is good.”

Pidcock has never raced Gent-Wevelgem as a professional, but he is familiar with aspects of the course, including the dirt roads of the Plugstreets, thanks to his experience in the junior and under-23 versions of the event. He is aware, too, that Gent-Wevelgem rarely, if ever, follows a set script.

“Honestly, today there isn’t one point where the race goes: it can be anywhere and it’s tricky in that respect,” said Pidcock, who lines up alongside Dylan van Baarle, Jhonatan Narváez and Elia Viviani in the Ineos squad. “Elia’s here in case there’s a sprint and he’ll be trying to get as far as possible.”

The slate grey skies and low cloud drooping over Ypres on Sunday morning could have been lifted from a Jacques Brel song, and those early conditions suggested that wind might not be a decisive factor in this edition of Gent-Wevelgem.

Even so, Pidcock was convinced that the race was unlikely to conclude in a mass sprint on Vanackerestraat on Sunday afternoon.

“The wind is a big part in this race, although with the fog we have here I don’t know how strong the wind will be. It will probably pick up later,” said Pidcock.

“I’ve never ridden this race before so I’ll look to the experience of the other guys on the team to see where the key points are. But for sure the race is going to be fast and it’s going to be hard and it’s not going to be a bunch sprint – I’m pretty sure of it.”