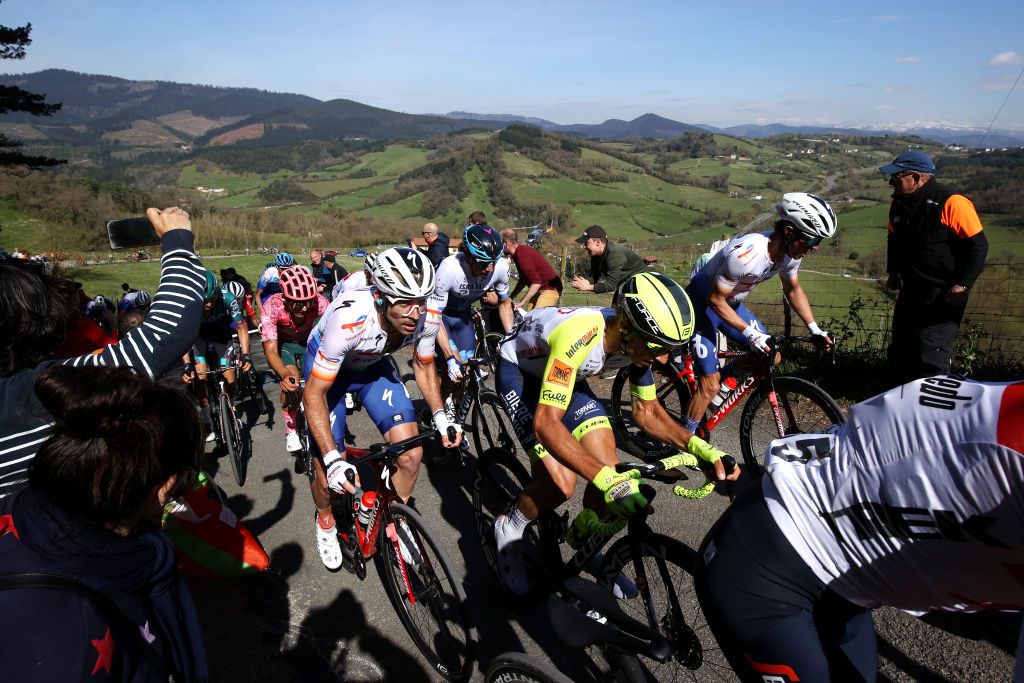 Pierre Latour started stage 4 of Itzulia Basque Country in ninth place overall, and if his aggressive racing during the 185.6 kilometres from Vitoria-Gasteiz to Zamudio was anything to go by, he had every intention of moving further up the ranks in the six-day race. However, a high speed crash on a descent just a little more than ten kilometres from the line brought the French riders aspirations at the hilly Spanish race to an end.

Latour was sitting near the back of a group containing key favourites which was quickly descending from the final climb of Vivero and toward the line, at that stage still in pursuit of a group containing Geraint Thomas (Ineos Grenadiers), Ruben Guerreiro (EF Education-EasyPost) and Davide Formolo (UAE Team Emirates) as well as Victor Lafay (Cofidis) who was solo out the front.

Than at around 11km to go Latour came down on a relatively straight stretch of road, skidding along the tarmac metres ahead of his bike before quickly rising to his feet with the pain of the fall clearly evident on his face.

The 28-year-old remounted and went onto finish stage 4, coming over the line in 107th place. That was more than nine minutes behind stage winner Dani Martinez (Ineos Grenadiers), who won the sprint from the group Latour had been in when he crashed, which set Latour back to 45th overall.

The overall hopes of TotalEnergies’ team leader were over and, as it turned out, so was his race.

“Victim of a fall during the 4th stage, Pierre Latour suffered multiple burns on his body,” TotalEnergies said on Twitter. “He will not be at the start tomorrow morning. Get well Pierro.”

Before the crash, Latour’s team were massing at the front and clearly working to better his overall position on the final climb, with plenty of room for movement up the ranks given only 25 seconds separated ninth place through to race leader Primož Roglič (Jumbo-Visma) at the start of the stage. On a steep section Latour accelerated off the front, but Roglič was quick to jump on his wheel though the TotalEnergies rider remained prominent at the front during the climb.

The strong show of form on stage 4, also came after Latour delivered a sixth place finish on stage 3, coming over the line with a select group that included Roglič. It was a display that had boded well for the rider who already finished in the top five of both Etoile de Bessèges and Tour de la Provence this year, while coming 14th at Paris-Nice.

It has been among the strongest starts to the season the rider, who last year moved to TotalEnergies from AG2R La Mondiale, has had since he won the best young rider classification at the 2018 Tour de France.