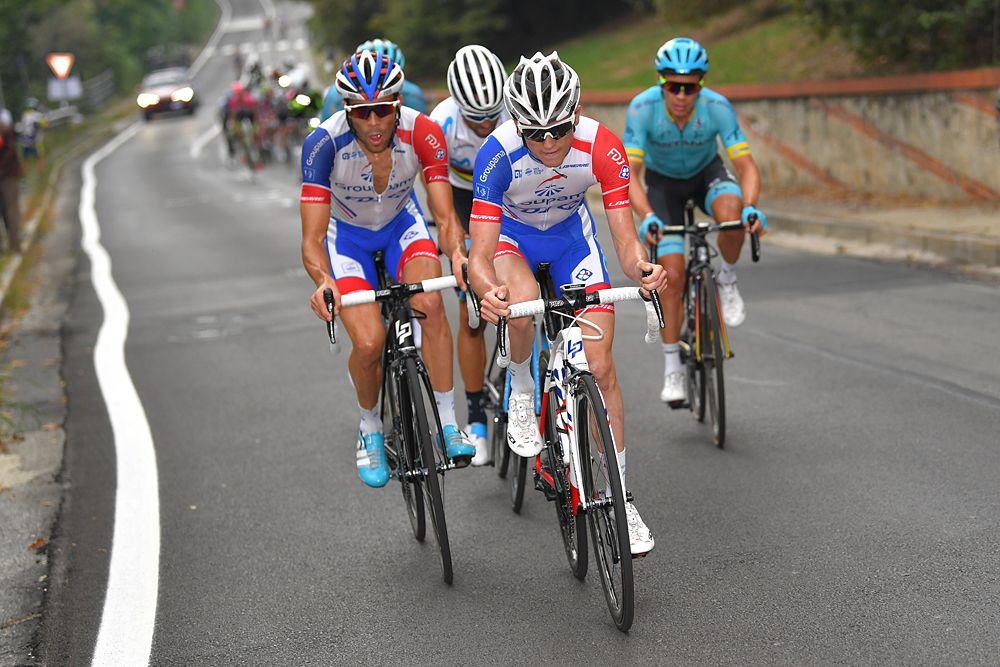 Thibaut Pinot will return to the Tour de France this year, leading the line for Groupama-FDJ alongside his understudy David Gaudu, as the team sends sprinter Arnaud Démare to the Giro d’Italia.

The French team held a press event on Tuesday to launch their 2022 season, with team manager Marc Madiot underlining the importance of the three Grand Tours after what he termed ‘failures’ in 2021.

Groupama-FDJ claimed 22 wins and finished eighth in the UCI rankings in 2021, but came away without a Grand Tour stage win for the first time in 10 years, and didn’t manage a top-10 overall finish in any of the three.  As such, Madiot explained that success in 2022 will largely be measured against the three-week races, as he outlined the structure of the team’s plans this season.

The alternation of Tour de France leadership between Pinot and Démare continues, with the former returning after a year dominated by injury and the latter switching to the Giro after failing to land a stage win at the 2021 Tour. Démare will have a full lead-out train in Italy but the team also have a potential GC presence in Attila Valter, who wore the pink jersey and finished 14th overall last year.

At the Tour, Pinot will share responsibilities with 25-year-old Gaudu, who had a tough first crack at leadership in 2021 but still finished 11th, while Stefan Küng, Valentin Madouas, and new signing Michael Storer are all already on the team sheet.

“For the Tour de France, we’re going to go with extremely high ambitions. We want to fight for the podium,” Madiot said, although he described this as ‘a collective goal’ and resisted any talk of a hierarchy.

“We’re six months away from the Tour, and it will be the evolution of the riders’ physical condition, along with the circumstances of the race, that will influence things. I can’t say right now who the main leader will be.”

Interestingly, Madiot mentioned not only Pinot and Gaudu but also Storer, the 24-year-old Australian climber who won the Tour de l’Ain and two stages at last year’s Vuelta a España. Asked to confirm whether it was a leadership trio, Madiot suggested the former DSM rider could be a surprise package.

“We’ll see how the race unfolds but, from what we saw of him in the mountains, notably at the Vuelta, he can be taken into consideration. In the first place, the squad is built around David and Thibaut but when you look at the general classification in recent years, ok, Pogacar has won, but when you look at some of the guys below him, how many would you have put on the podium or in the top-five six months beforehand?”

Madiot suggested that Démare was disappointed to have missed out on the Tour but insisted this was “excellent news” that highlighted the Frenchman’s ambition, and backed his sprinter to return to his best at the Giro.

Groupama-FDJ’s plans for the Vuelta a España have yet to be defined, with decisions to be made based on the outcomes of the Giro and Tour. Elsewhere, they’ll aim for success in the Classics, with Démare targeting the flatter races likes Milan-San Remo – which he won in 2016 – and Stefan Küng focusing on the cobbled Classics as well as time trials, notably the opening stage of the Tour in Copenhagen.

Despite the win count and the UCI ranking, Madiot revealed that the 2021 campaign had led to a period of soul-searching ahead of 2022. They have only made four new signings – Storer, Lewis Askey, Quentin Pacher, and Bram Welten – but Madiot spoke of renewal, underlining the importance of recent training camps in November and December.

“It was the first time in two years we’ve been able to gather with the whole team, which was enormously beneficial,” he said. “We did a thorough analysis and we saw a need to rediscover ourselves, to remobilise, and that’s what we’ve put in place. Today we’re sure of one thing, and that’s that we have the means to make a success of 2022.”

In true Madiot fashion, he made an impassioned speech to riders during a recent training camp, using the D-Day landings at Normandy during World War II as a metaphor for the collective spirit he wants from his riders.

Speaking on Tuesday, he explained that he wanted the same spirit of fearlessness and togetherness from his riders this year.

“I want people on that boat who pull in the same direction, to be able to tackle the biggest difficulties in cycling. I want my riders to understand that nothing is out of reach. We have a boat, our boat is called Groupama-FDJ, we’re going to board that boat.”