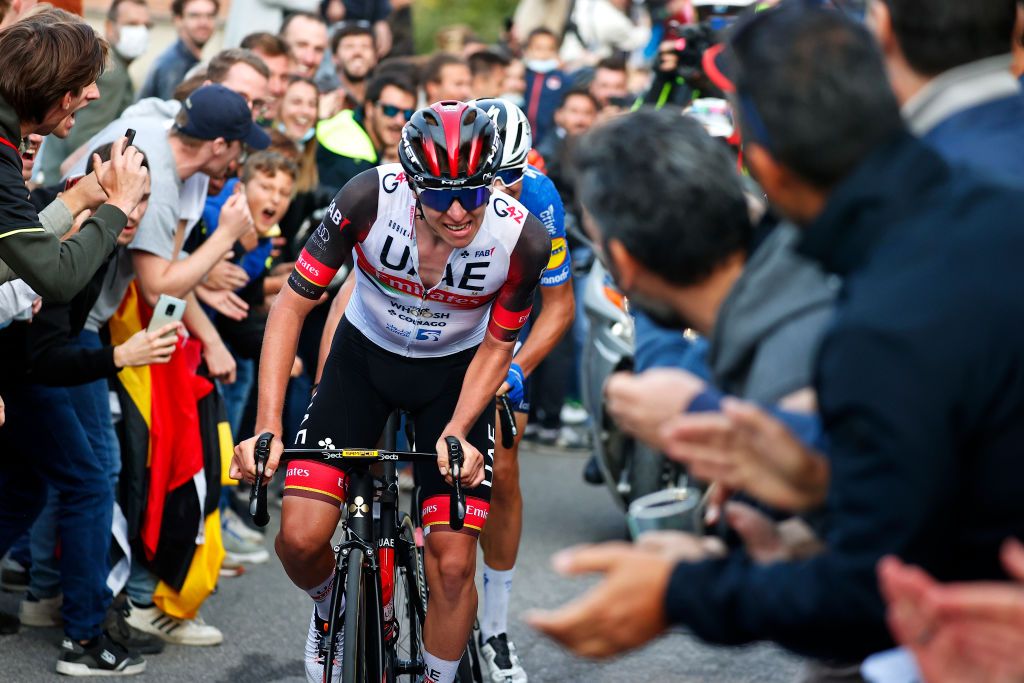 Every time a new rider emerges to dominate the pro peloton, they’re faced with comparisons against the greatest male rider of all time, Eddy Merckx. Tadej Pogacar (UAE Team Emirates) sat down at a sponsorship event at DMT headquarters in Verona with ‘the Cannibal’ where the pair traded compliments.

Pogacar made history this weekend winning Il Lombardia after taking his second Tour de France and in the same season as another Monument victory at Liège-Bastogne-Liège, and Merckx suggested that the Slovenian could finally be the next great champion.

“I have heard many times ‘this is the new Merckx’ without the conditions being fulfilled, but with Tadej I think we are really there this time,” Merckx said, according to Tuttiobiciweb. “He is 23 and has already won the Tour de France twice, incredible.

Over his 18-year career, Merckx won no fewer than 525 times, winning the Tour de France five times, the Giro d’Italia five times and the Vuelta a España once. He won 34 stages of the Tour, 24 in the Giro, was world champion three times.

Pogacar said it would be difficult to equal such a wide-ranging record. “Many have told me that I am the new Merckx, but it is impossible to win everything he has won,” he said.

“Eddy is a total racer, he has won everywhere. It will be difficult for me to win a Milan-San Remo [once], let alone seven like he did. I certainly like to win, but I also know how to accept defeat. Every race I participate in I try to make my mark, even if it is a simple criterium in Slovenia. But I believe it is in the nature of every cyclist.”

Merckx pointed to Pogacar’s breakthrough performance at the Vuelta a España in his first pro season in 2019 as the moment when he realised the Slovenian’s talents. “I already understood that he had something special when in his first year as a professional he had won three stages at the Vuelta, the last of which attacking 37km from the finish with all the Movistar chasing behind. And then this year at the Tour, in the stage of Le Grand-Bornand, he destroyed all the competition by trimming minutes after minutes…”

“I didn’t expect to gain so much that day,” Pogacar replied. “A perfect day, even for the difficult weather, I pushed hard and the advantage increased: one minute, two minutes, three minutes up to four minutes! I was really in great shape.”

Merckx had some advice for his young star-struck companion on the stage. “I can only tell him to keep his feet on the ground because every year he starts from scratch and every year he will have to prove that he is the strongest. But he knows this very well, and he has a great team around him who can help him a lot, taking care of everything down to the smallest detail. He is a complete rider, if he remains what we have seen so far he will win many other Tour de France and, obviously, also the Giro d’Italia.”

Although he has already won the Tour twice and earned a medal at the Olympic Games, Pogacar said he has other goals. “This year I finished third in the Olympics, I would like to go back to win the gold medal. But I’d also like to win a World Championship. And the Giro. And also the Vuelta.”

When asked if Pogacar had any weaknesses, Merckx said, “I think not. He has the mentality and professionalism of the great champion and when you have them you have no weaknesses.”