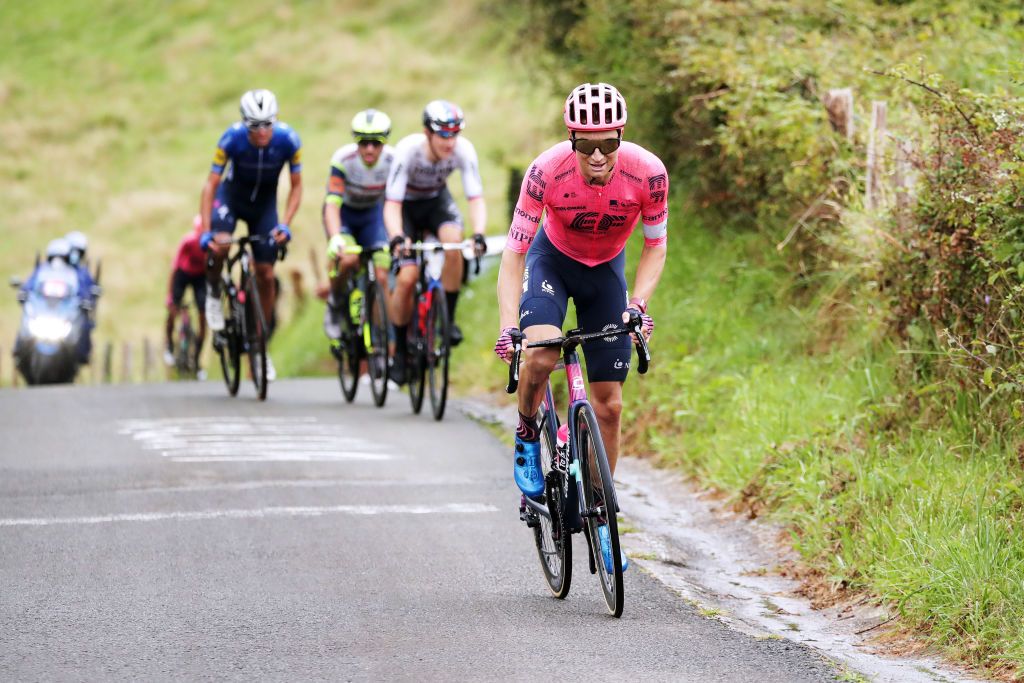 Neilson Powless (EF Education-Nippo) jumps into the fold of the gravel world with a start Saturday in the 107-mile Big Sugar Gravel race in Bentonville, Arkansas. It’s the first edition of Big Sugar, an event produced by Life Time, the same organisation behind Unbound Gravel and the Leadville Race Series.

On the road this season Powless impressed from start to finish, picking up a victory at Clásica de San Sebastian and then riding in the breakaway at the World Championships to an impressive fifth-place finish, the best result for a US rider since 1999.

Saturday the path will lead across rural Arkansas and Missouri with chunky rocks, stream crossings and 9,000 feet of elevation gain in the Ozark mountains. It’s a new region to explore for Powless, a reintroduction to his early days on a bike, but it’s still a race.

“I want to win, definitely. I’m just competitive no matter what I am doing,” Powless told Cycling News.

“I’ve never raced a gravel event, but I grew up racing XTERRA off-road triathlons, as well as XC World Cups before I switched my focus to road. The last race I did off-road was junior XC world championships in Hafjell, Norway where I finished seventh. That was back in 2014 so it’s been quite a while since then. Hopefully I still remember how to handle my bike in the dirt.

“The main appeal Big Sugar had for me was the timing. It’s the perfect time of the year for me since all of my races in Europe are finished for the year. I’ve also heard a lot of hype around Bentonville, I’ve been itching to check out the town and the off-road terrain.”

In the men’s open category, the 25-year-old American faces big competition at the first edition of Big Sugar against gravel gurus Peter Stetina, Colin Strickland, and Ben King. There’s no such title as a defending champion in Arkansas, but the field is packed with experienced riders.

“I’m super excited to race against guys who have already been involved with gravel for a while now. It will be nice to have people there who are strong and have a lot of experience with these events. I’ll probably just try to follow their lead during the race. As long as I can keep up,” Powless said.

“But I’m going to be honest; I’m going into this pretty naively. It sounds like typically toward the end of these races, people are just absolutely running on fumes, trying to race on what they have left in the tank, because you really have to be stomping on it all day. That just makes me excited to go. It will be an honest race.”

In his second season with EF Education-Nippo, Powless decided to take advantage of the team’s ‘alternative calendar’ program. Teammates Alex Howes and Lachlan Morton are all-in for non-road competitions and adventures, with Morton currently at the Cape Epic with Kenneth Karaya, who was third in the Migration Gravel Race.

“The freedom we have in EF is really nice. Everyone gets plenty of time at home which really helps to stay in a good headspace throughout the season. That’s definitely part of the reason I’m racing Bug Sugar, but the main reason is just because I miss racing off-road. I spent my childhood riding and racing off-road with my family. I can’t wait to get back to those roots.

“I think there are two aspects to why I love cycling,” he adds. “Being able to balance both of them with our team is so unique. I can race the Tour de France and be at the pinnacle of professional road cycling – be the most methodical, thought-out, peak-form athlete I can be – and then a few months later show up at a gravel race that starts before the sun rises and carry all of my own repair kit and just sort of feel like a kid and enjoy being outside.”

In preparations for Big Sugar, Powless has sought advice from Morton as well as his sister Shayna Powless, who was fifth overall for women in the 2021 Unbound Gravel 200. He needed tips on tyres, nutrition and how to manage efforts over a course like this.

“I actually was talking to my sister today about gravel. I was in the middle of stress-shopping for equipment since I had no idea what I’ll need or what people normally carry on board for these events. She gave me a lot of good advice on how the races tend to play out, and the proper mindset to go into this with,” Powless told Cycling News.

The equipment choice he made was to ride his new Cannondale SuperSix EVO SE, with Vittoria Tirreno Dry tires, and Di2 shifting.

“I have only gone on a few rides since Lombardia, but I’ve been blown away with how confident I am on single track with that set-up,” he said.

That form from Il Lombardia will be important for Powless. He’s been at his California home since that race and resting, with a week to ride on dirt. The day after Big Sugar, he said he would go for a Rapha club ride in Bentonville, but for now will see how it goes on Saturday.

“I’m planning on showing up and spending the early parts of the race just figuring out the rhythm. I feel like I’ll be ready for just about anything. If it starts out hard, I’ll roll with that. If it starts out easy, I’ll roll with that, and then maybe just try to attack or do something toward the end, but overall I really have no idea what to expect.”