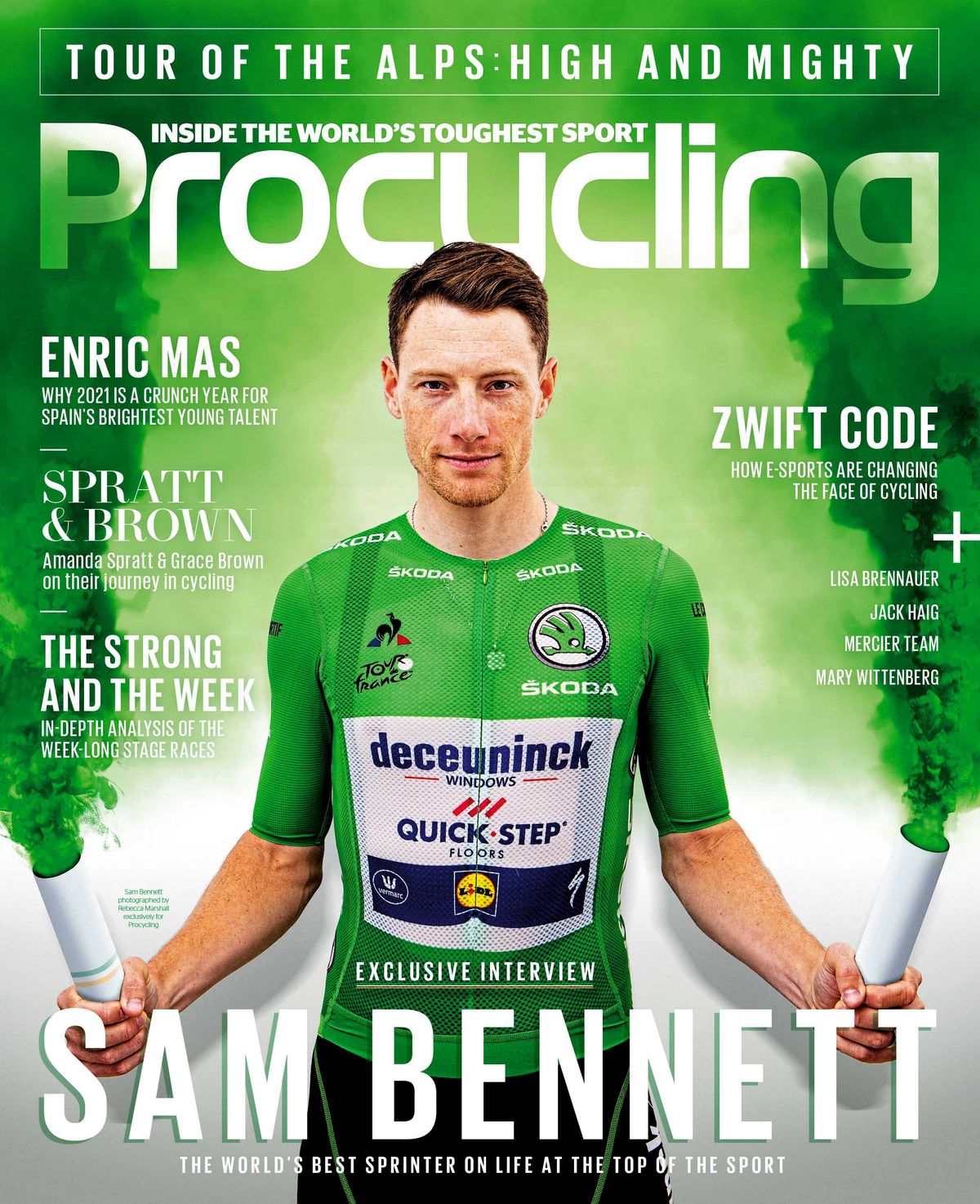 Sam Bennett has carried on where he left off last year by proving to be the most successful sprinter in the peloton, as results go so far in 2021. The fastest man currently in cycling graces the cover of Procycling magazine’s June issue, wearing the green jersey he won in last year’s Tour de France, becoming the first pure sprinter since Mark Cavendish in 2011 to win the competition.

The Deceuninck-Quick Step Irishman has now won stages in all three grand tours, and, with seven victories this year goes into the Tour in July as one of the favourites to win the most stages. Yet, speaking to Sophie Hurcom, Bennett explains why he doesn’t need to go around shouting about his ability, as his results speak for themselves.

He said: “A lot of the time in cycling, you spend so many hours on the road with these guys it’s better to have friends than enemies. I think cycling is different to other sports, where you don’t have to psych each other out, because at the end of the day it’s up to the legs whether you have it or not at the end. There is confidence there, I just don’t have to go around saying it.”

Another rider who had a successful 2020 in Grand Tours was Enric Mas, who finished fifth overall in both the Tour and Vuelta a España. The Spaniard, now 26, has been tipped as his country’s best stage racing prospect for a number of years, yet retains an air of mystery off the bike. Speaking to Alasdair Fotheringham, he explained how his two grand tour results inspired different reactions.

Mas explained that after the Tour his glass was “neither half-full or half-empty, it was completely full”. However, he continued: “But after that I went to the Worlds and by then I wasn’t really hitting the high notes and the last week of the Vuelta was really tough. We were getting into November, really late in the season and  rather than go on racing, I just wanted to stop riding my bike.”

While the Giro d’Italia enters its second week, one of the key warm-up races has become the Tour of the Alps in recent years. This year the five-stage race was won by Simon Yates in a dominant fashion, yet as Stephen Farrand writes, the mountainous race has its own unique identity. “The Tour of the Alps has its own history and raison d’etre. It has its own concentric and connecting circles of local, regional and international significance that make it unique and also make it a very successful race that deserves respect and appreciation.”

The week-long stage races, such as the Tour of the Alps, make up the backbone of the cycling calendar despite not necessarily having the prestige of the grand tours. Still, they are far from just training ground for bigger races. Edward Pickering analyses the results from the last few years to find out what riders perform best over one week.

The latest piece in our State of the Nation series is an in depth look at Spain, a country which has produced multiple grand tour champions but few classics winners. Alasdair Fotheringham writes about the different nature of cycling in Iberia, where cycling might divide rather than bring together provinces. “As far as professional cycling is concerned, that unusual political and economic imbalance might help explain the radically different impact the sport has had in different regions, and which we can appreciate in the Basque Country compared to the rest of Spain today.”

Also in the magazine is an interview with the German star Lisa Brennauer, who is firmly back at the top thanks to a consistent couple of seasons. In an interview with Adam Becket, she talked about her goals for the Olympics, where she will be competing on the track and the road. She also spoke about how she has refocused, and is taking time to treasure her results.

Australian Jack Haig is a man who seems at peace with itself, or he was when he spoke to Adam Becket, anyway. The Bahrain Victorious rider talks about settling into a new team, and how he’s finding the balance between his sporting ambitions and sense of contentment. He said: “I truly believe that if you’re having that happy career, the results will come naturally. You don’t need to set goals for those results to be there. The more important focus is to be happy, and keep learning, and with that comes the results. I know it’s not a very catchy quote, but I think it is what is important to me.”

Two of Haig’s compatriots are Amanda Spratt and Grace Brown, both at Team BikeExchange. The pair have stepped up as team leaders since the departure of Annemiek van Vleuten to Movistar this year, and told Edward Pickering about being Aussies at an Aussie team, and how they got into the sport.

Elsewhere, we have an interview with Mary Wittenberg, who as president of EF Education-Nippo, is currently the most senior female executive in the men’s WorldTour. She tells Procycling about her journey into cycling, her background as an elite runner and her plans to make cycling bigger. While Kate Wagner explores the boom in e-racing, discovered by many people during the last year of lockdowns. She writes about how it works, and how it’s different from racing in the real world.

Also in the magazine are all the regulars, including a retro feature on Mercier, and a Q&A with Alexander Kristoff as well as all our regulars including diarists Kevin Réza, Brodie Chapman and Charlie Quarterman, as well as Dan Martin and our columnist Laurens ten Dam.

Procycling magazine: the best writing and photography from inside the world’s toughest sport. Pick up your copy now in all good newsagents and supermarkets, or get a Procycling subscription.

SOURCE: CyclingNews   (go to source)
AUTHOR: Adam Becket
All copyrights for this article, including images, are reserved to the original source and/or creator(s).