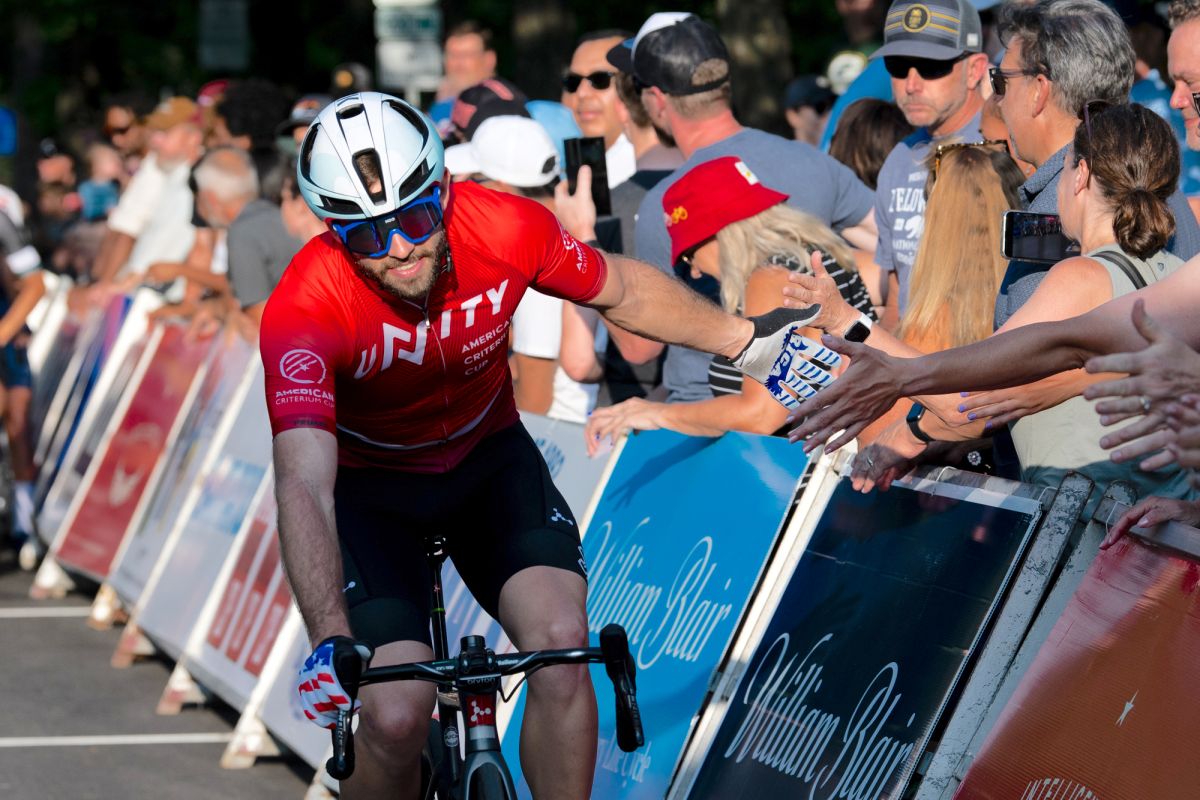 Consistency is the name of the game at the American Criterium Cup (ACC) and Project Echelon has staked its claim on the men’s side of the inaugural US national racing series. With two races to go, Brandon Feehery leads the men’s overall and sprint standings while Project Echelon Racing teammate Ethan Craine as the top under-23 rider.

Feehery has raced all seven of the men’s ACC events, beginning with a fourth-place finish at Sunny King Criterium in April, then adding a fourth at Lake Bluff Criterium during Intelligentsia Cup at the end of July and an assortment of top 15 finishes in the other contests. The team has made the ACC one of its main objectives for the season.

“The American Criterium Cup was on our radar in the beginning of the season. After the first few races we realized we had a good chance to win the sprint competition and possibly the overall as well. This season has been a blast to race against teams like L39ION, Best Buddies and Miami Blazers. The competition this year has really stepped up/ It shows that over last season all the teams have done their homework to step up their game this year,” Feehery told Cycling News.

So no wins at an ACC event can net a series lead? Most of the victories on the men’s side, four of them to be exact, have been snatched by Ty Magner of L39ION of Los Angeles, but since the L39ION team opted not to participate in the ACC series that left the points and prizes up for grabs. At stake is a $100,000 series prize purse to be split equally among men and women after the finale on September 4 at the Giro Della Montagna that is part of the four-day Bommarito Audi Gateway Cup in St. Louis. And the majority of the events have live broadcasts for the pro races.

“For us, at the beginning of the year, we set a goal to be considered the best all-around team in the country. If you look across disciplines, we wanted to be recognized as the best,” said Eric Hill, founder and director of Project Echelon Racing.

“And we feel that we’ve accomplished that between our success at Redlands, taking third at Joe Martin, also taking podiums at pro nationals and then leading the American Criterium Cup. I don’t think that there’s another program that has that type of depth and results across disciplines.”

Project Echelon Racing finds ways to win on a diminished North American racing scene. The US-based domestic elite team won the overall at Redlands Cycling Classic, took third overall at Joe Martin Stage Race with Tyler Stites, a silver medal in the USA Cycling Pro Road Race championship by Stites and also in Knoxville a bronze in the pro time trial by George Simpson and a fifth place in the pro criterium by Hugo Scala, Jr.

A key to success in the ACC for the 30-year-old Feehery has been the addition of ‘extra pop in the legs’ of 20-year-old Craine. The young New Zealander is in his first season with Echelon Project and has made a huge difference.

“He came over to the States as a guest rider last year and we had the opportunity to raise him at ToAD [Tour of America’s Dairyland], Intelligentsia Cup, and then again at Green Mountain State race – three very different dynamics. He was good at all of them,” Hill told Cycling News about Craine, who won two stages at Green Mountain last year.

“So we’re really excited to bring on some young energy with him. He’s very knowledgeable for his age, a very crafty rider. And he’s got the legs to back it up. To be able to put a one-two with him and Brandon, you know, one of the best veterans in the group, to put those two together,  is a really awesome team dynamic. Ethan’s there when it matters, in the last five to 10 laps, and he has certainly been critical in positioning Brandon to have the success that he’s been having.”

That dynamic has paid dividends so far in the American Criterium Cup, as Craine has worked for Feehery, but worked his way into the results with a sixth place at Boise Twilight, 10th at Littleton Criterium and a pair of 14th placings in Salt Lake and Lake Bluff.

“We didn’t have a full squad at most of the races so that made it a good opportunity for Ethan and myself to work hard together to go for points in the sprint competition and then fight hard for the finish,” Feehery told Cycling News. “We really had to use our skills as savvy riders to try and beat the bigger teams that had full squads at all the races.

“Having Ethan on the team this year has been huge for us. He is a younger rider with a lot of talent and potential to do some big things in his career. In an early-season race he crashed and broke his hand, which took him out of training and racing for a few weeks. It has been a lot of fun watching Ethan grow not only as a rider these last few months but as a teammate as well.

“In the past he was a successful individual racer, now a huge asset to the team. Ethan can and will be one of the top crit races soon and has the potential to be a top road race sprinter as well.”

Feehery has been with the Project Echelon team for a number of years now and said he is recharged with the younger riders on the squad.

“Racing this year has sparked a new fire under me to keep training and growing as a rider. I want to use my skills and knowledge that I have learned and developed over the many years that I have been racing and use that to help the younger riders like Ethan and Hugo make it to the next level in the sport and see how far they can go. I want to help the younger riders become the best racers in the sport,” he added.

Feehery and his teammates are focused on two more ACC races to close out the season – August 27 at IU Health Momentum Indy in Indianapolis and then the finale on Labor Day weekend in St. Louis.

With two races remaining of the nine for men, Feehery has a 498-point lead in the overall standings to 373 points taken by Clever Martinez (Blazers). Alfredo Rodriguez (Best Buddies Racing) has 296 points, keeping him just ahead of Thomas Gibbons (Automatic-ABUS), 281. Rodriguez, who crashed in the Bailey & Glasser LLP Twilight Criterium in Boise in early July when he had the overall lead, is expected to return to action for the final two races.

Feehrey is largely a lock on the men’s sprint season-long standings, as he has an 85-point margin on teammate Crane. The next three riders are separated by five points each, Hernandez in third, Gibbons fourth and Frank Traviesco (Blazers) fifth.

Like the men, the L39ION women have collected a good number podiums at ACC individual events, but the points collected do not count towards ACC rankings. Both Skylar Schneider and Kendall Ryan have a trio of victories each, Ryan’s haul coming on the last three consecutive races.

The women have completed eight races, while the men have just seven, the difference being at the MVP Health Care Rochester Twilight Criterium in Rochester, New York in May. While the pro women’s contest was completed, heavy thunderstorms halted the men’s race after three laps and officials then cancelled the race with lingering lightning and rain.