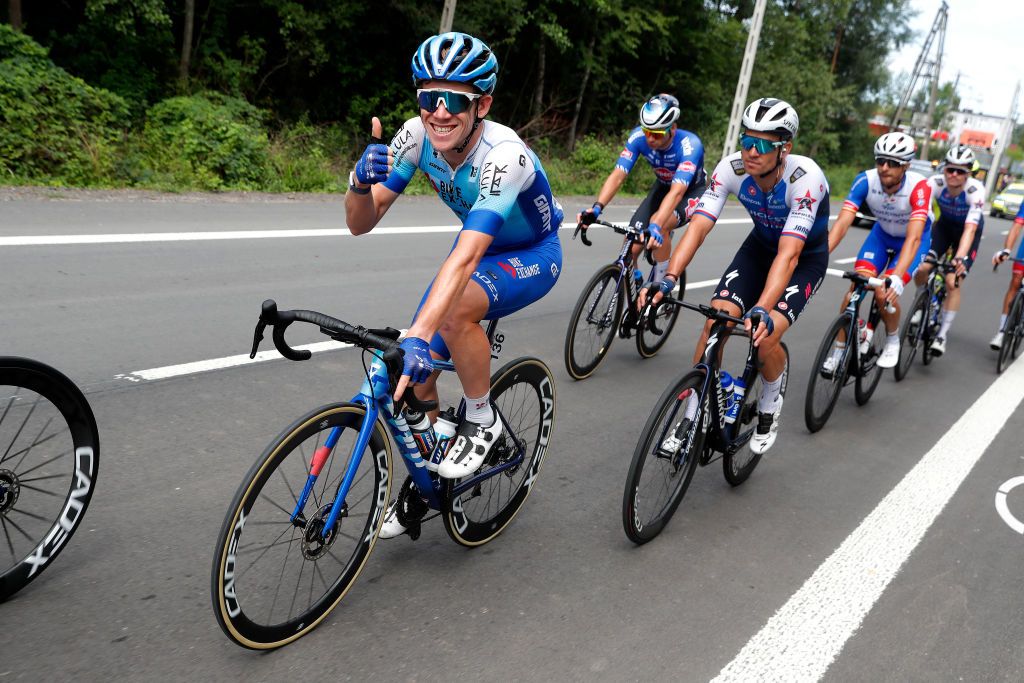 One more week is behind the men’s pro peloton and another block of racing has influenced the three-year UCI Team Rankings that will determine which teams will remain in the WorldTour in 2023 and who will find themselves in the dreaded relegation zone.

The big winners this week were BikeExchange-Jayco, who clambered over EF Education-EasyPost and Cofidis into 15th.

The Tour de Pologne and Vuelta a Burgos and the lesser-known races like the Czech Sazka Tour and Tour of Leuven played key roles in the standings. While the biggest teams continued to hoover up points – Ineos Grenadiers earned twice as many or more than most teams with victories in Poland and Burgos (757pts) – the week was another dismal one for Israel-Premier Tech, who only managed to gain five points.

Again, the Israeli-Canadian outfit were penalized by the points accumulation being limited to the top 10 scoring riders of the season. While Jenthe Biermans earned 50 points with fifth place in the Tour of Leuven, those didn’t count. Only Omer Goldstein’s five points for third place on stage 4 of Vuelta a Burgos made the cut.

That leaves the team in 20th place, further behind Lotto Soudal. The Belgian team had another solid week, with Victor Campenaerts taking 125 points for the victory in Leuven, Stef Cras adding a respectable 16 points with 25th place overall in Poland and – because every point is going to be important – even 16th place for Florian Vermeersch in Leuven added three points. Lotto Soudal whittled down their gap to 18th-placed Movistar by 104 points. It’s still a yawning 659-point chasm, however.

The worries that EF Education-EasyPost had before the Tour de France appear to have eased, although they arranged two mid-season transfers just in case. They kept plodding along this week with 110 points thanks to Ruben Guerreiro’s 80-point haul, Esteban Chaves’ 25 and Hugh Carthy’s five points in Vuelta a Burgos. Although the American team lost one position to BikeExchange, they broadened their advantage over Cofidis, who earned just 23 points this week.

Movistar, however, didn’t do themselves any favours this week, earning only 40 points with minor placings in Poland and Burgos.

Alpecin-Deceuninck and Arkéa-Samsic coasted through the week, getting some minor results but not from their top 10 riders. Even so, the two ProTeams are firmly positioned ahead of the teams fighting relegation and look to be shoo-ins for the WorldTour.

Uno-X and TotalEnergies, however, have far too much ground to make up on the WorldTeams to be considered for the WorldTour in terms of the sporting criteria in the rankings. TotalEnergies have a far better shot at being one of the top two ProTeams at the end of 2022, and that would earn them automatic invitations to the Grand Tours and major one-day races.

Where the teams go from here

Relegation isn’t the end of the road for Lotto Soudal. Looking at the 2022-only team standings, they are the clear winners and stand to remain so. 12th in the current year’s team ranking, they’re well ahead TotalEnergies and Uno-X and confidently above Israel-Premier Tech.

Even if they are relegated from the WorldTour, they’re highly likely to be featuring at the Tour de France, Paris-Roubaix and all the important events in 2023 as the top ProTeam as Lotto-Dstny. They’ve got a 1,424 lead over Israel-Premier Tech this season.

TotalEnergies are the next-best placed team from the ProTeam ranks who aren’t expected to join the WorldTour. Israel-Premier Tech trail the French outfit by 468 points, so it’s not looking good for Chris Froome’s team in terms of automatic invitations so far.

Lotto Soudal have stacked their late-season calendar with the disproportionately valuable one-day races, sending Campenaerts to a slew of 1.1 races on home turf rather than to the Vuelta, while Tim Wellens will be their go-to for the WorldTour one-day races, the Bretagne Classics and GP de Québec and Montréal. They’ve also got eight one-day races, either 1.1 or 1.Pro on the calendar for September and October, finishing out the season with Tour de Langkawi.

Movistar seem to be relying heavily on the Vuela a España, sending top 10 scorers Alejandro Valverde, Enric Mas and Carlos Verona, and they stand a good chance at holding off the gains by Lotto Soudal. The Spanish team are favouring stage races – Tour of Britain and Cro Race – and the Italian one-day races around Il Lombardia. Their plan has more race days, fewer points through stage wins, but more on the line for GC.

Israel-Premier Tech are going after some of the same stage races as Movistar, but also have a programme of one-day races in Italy that Lotto Soudal don’t have. They’re also taking on some smaller stage races –  Tour of Slovakia, Arctic Race of Norway and Tour of Denmark that aren’t on Lotto Soudal’s or Movistar’s plans.

Israel-Premier Tech will rely heavily on their top 10 riders. Expect Jakob Fuglsang, who crashed out of the Tour de France, to be a key scorer in the late season along with Carl Fredrik Hagen, Krists Neilands – who is close to Omer Goldstein’s 10th place tally – and sprinter Giacomo Nizzolo who is likely to score big in the autumn series of one-day races in Italy. Another interesting development was the mid-season signing of Dylan Teuns in a desperate bid to boost their points tally.

TotalEnergies will hope for Peter Sagan to start scoring more, sending the three-time world champion to the WorldTour one-day races in Hamburg, Quebéc and Montréal. They’ve also planned a bucketload of one-day races for the late season plus the Tour Poitou – Charentes and Tour of Luxembourg.

Who the WorldTour teams and automatic invitees will be in 2023 is still very much up in the air, but one thing is still certain; the battle for points will last well into the fading light of autumn.