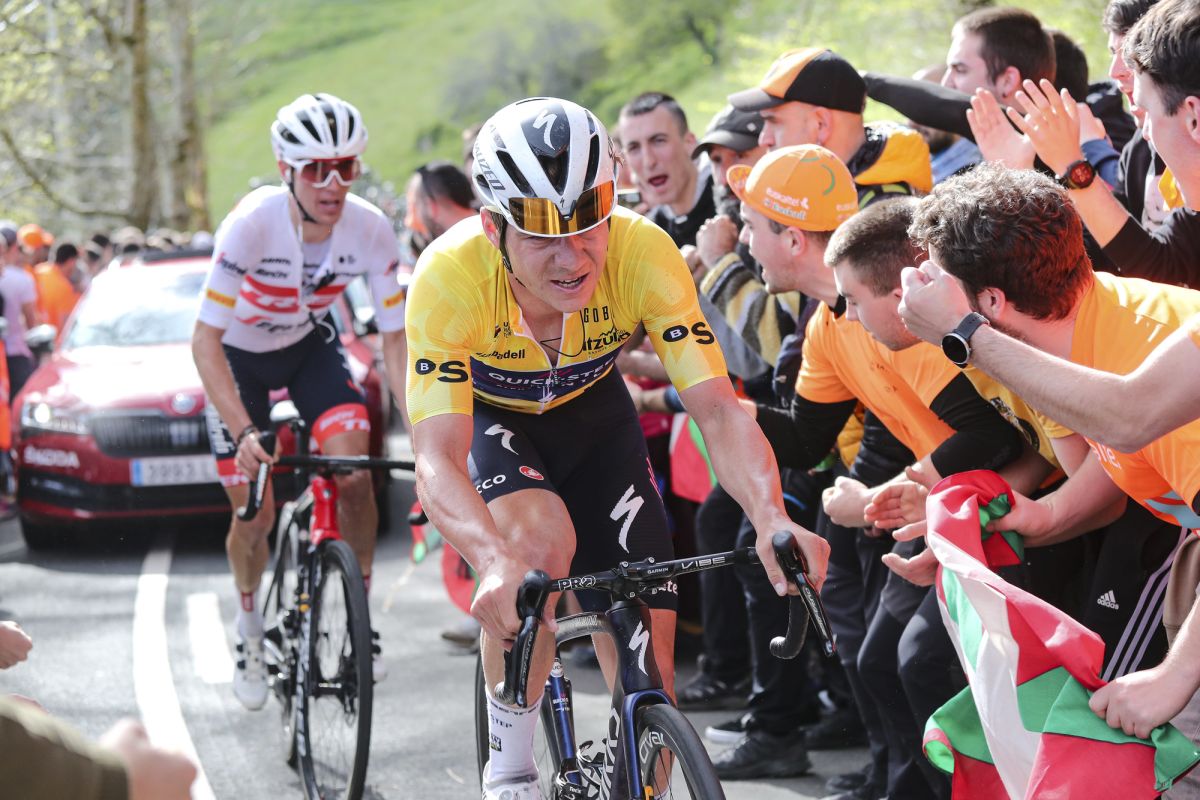 Remco Evenepoel expressed some disappointment after losing Itzulia Basque Country to Daniel Martinez (Ineos Grenadiers) on the final day of racing at the six-day event. The QuickStep-AlphaVinyl rider started stage 6 in the overall lead but was distanced on the finale Usartza climb into Arrate.

“I dropped back, and there are no regrets. We had to chase back. What can I say? I tried everything to come back, also when the guys started to attack. I only dropped when I attacked, and then the gap remained the same. It was not a bad day. It was just that some percentages to be up there with the best, fight with the best, and keep attacking – I missed that today. It’s a bit sad to miss the podium by seconds.” Remco Evenepoel said in a post-race interview.

The Belgian had a strong showing from the start of Itzulia Basque Country, placing second to Primož Roglič (Jumbo-Visma) in the opening time trial in Hondarribia. He maintained his second place in the overall classification until stage 5 in Mallabia where he finished third and moved into the leader’s jersey.

Evenepoel was forced to close down several threatening gaps in the race’s final third that opened over the Gorla and the Urkaregi climbs. He used his descending skills to catch back on each time. He also dragged himself back after small splits in the front group that opened due to several attacks heading toward the final climb.

He then sprinted for the time bonus intermediate sprint located in Eibar, just nine kilometres from the finish and just ahead of the last ascent up Usartza. He won the sprint and the three seconds – with Martinez taking two and Bilbao one – and he padded out his GC lead over Martinez to three seconds.

“I learned nothing; maybe I learned that I can go down a mountain very well, but that’s everything I learned today,” Evenepoel told the press. But the time bonuses wouldn’t be enough to save his overall lead.

The Spaniard was also the strongest in the final winning the stage and the time bonuses for 10 seconds, while Vlasov finished second with 6 seconds, Soler third with four seconds and Martinez fourth with two seconds – enough to take the overall win from Evenepoel, who finished seventh on the day at 24 seconds back, and fourth overall.

“Even though I am not on the podium, I came here to test myself against the big guns from the Grand Tours, and I think that I did very well. Also, today, I was up there until the last climb, and when they made one big acceleration, I could not follow, but I could remain at a high pace, which ended up losing [24] seconds to the first guys,” he said. “Then you have the story of the [time] bonifications, which kills it a bit, and probably made me lose the podium.

Evenepoel said he was happy with his form despite losing the race in the final stage.

“That’s life. I think the shape is OK, but that doesn’t mean that I feel really happy now because it would have been lovely to have been on the podium in the Basque Country. I hope you guys are happy with what I showed this week.”