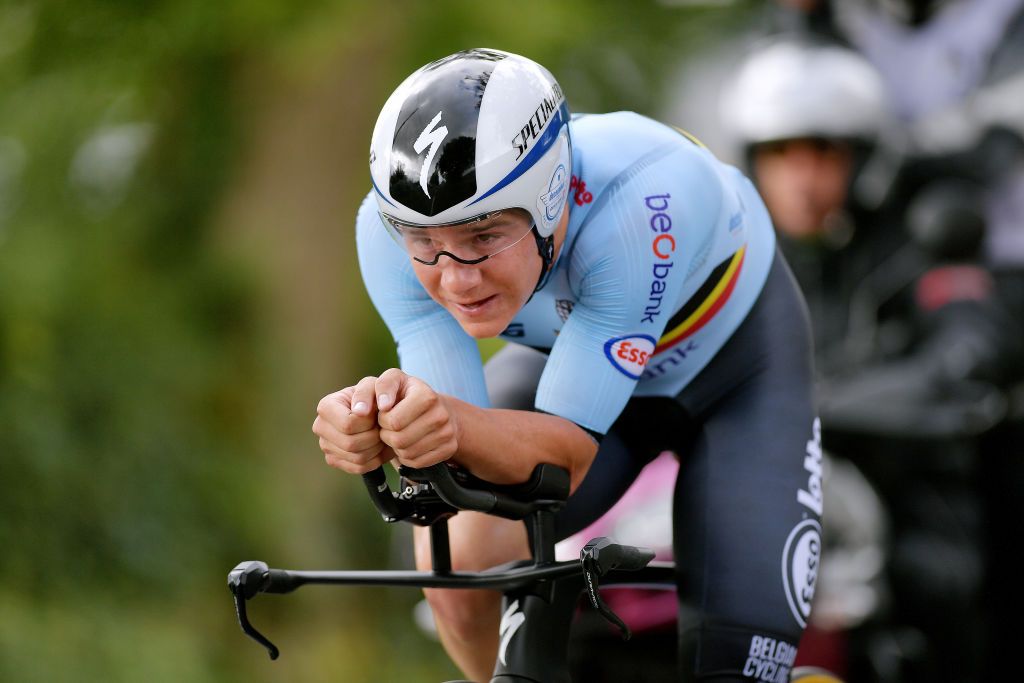 Remco Evenepoel feels he is back to his best form despite a roller coaster of success and disappointment in 2021 and is convinced he can fight for victory in the time trial and road race at the European Championships in Trento.

Evenepoel pulled out of last week’s Benelux Tour with a stomach problem but travelled to Italy on Monday, knowing that he had also secured a place in the Belgian national team for the World Championships in Flanders. He will ride the time trial alongside Wout van Aert and then has promised to respect Van Aert’s role as sole team leader for the road race.

Evenepoel’s place in the Belgian team had been in doubt after it emerged he had ignored team tactics in the Olympic road race and attacked before planned. He was then dropped on the Mikuni Pass, leaving Van Aert alone for the finale when Richard Carapaz attacked with Brandon McNulty.

Some of Evenepoel’s critics went as far as suggesting his riding cost Van Aert the gold medal. He has avoided responding to any criticism but admitted he questioned his form after the Olympics, where he was only ninth in the time trial. He mentally clicked back into form by winning a stage and the overall classification at the Tour of Denmark.

“After the Tokyo Games, I had a hard time physically and mentally,” Evenepoel admitted to the Belgian media in Trento.

“Doubts arose. It’s not that I crawled into a corner grieving, I continued to work hard but the feeling prevailed that I wouldn’t be on form again this season and that I would have to miss the beautiful emotions of the European and World Championships. I was actually already at peace with the idea and focusing on 2022, so it’s really nice that I can still find my best legs so late in the season.”

Evenepoel hopes to repeat his success of 2018, when he won the junior European time trial and road race titles before going on to win both again at the World Championships in Innsbruck.

Now he is racing at professional level, against riders much older than him and on a flat and fast course in the Trento valley. He will go up against Filippo Ganna, Stefan Kung, Stefan Bissigger and Tour de France winner Tadej Pogacar. The pure time triallists are more suited to the 22.4km course but Evenepoel fancies his chances.

“I’ve beaten them all before. I’ll be going full throttle but I know it won’t be simple,” he said.

“Everyone is super motivated and wants that jersey. Which may not have the same look as the rainbow jersey but you can wear it for a whole year if you win it. So I value it highly.”

He also has a little extra motivation; victory would award Belgium a third spot in the World Championships time trial and allow Deceuninck-QuickStep teammate Yves Lampaert to ride alongside Evenepoel and Van Aert.

The 172.9km elite men’s road race covers eight laps of the 13.2km Trento circuit but starts with a 50km loop through the Valle dei Laghi and the climb of the iconic Monte Bondone that overlooks Trento. Monte Bondone could inspire long-range attacks to distance the sprinters but the Trento circuits are expected to see the decisive racing.

“It includes almost 4,000m of climbing, that can make a difference,” Evenepoel predicted.

“A rider like Colbrelli can survive that. Hopefully it will be fast from the start, then the door at the back of the peloton will open. After the loop there are eight laps each with a 3.5 km climb at five per cent. It will not be easy, but I also want to go full for the win there and give Belgium the [European] star jersey.”

Evenepoel’s 2020 season and his career were derailed by his crash over a bridge at last summer’s Il lombardia and his long recovery from a fractured pelvis, which disrupted his winter training. He rode the Giro d’Italia on just two months of training and no racing, ultimately paying the price, cracking after a week of racing and abandoning after stage 17.

He is expected to return to Il Lombardia in October to shake off the memories of his crash before taking a break and building the foundations for what he intends to be a successful 2022.

“In April, if I’m honest, I didn’t have the level to contest a series of hard races. The Giro d’Italia made that clear; after ten days my condition faded. Before Tokyo, I was away from racing for a month, with all its consequences,” he admitted.

“As a team we’ve learned from this for the future. Just doing training camps doesn’t work for me. I also need to race. Of course, what makes the biggest difference is a flawless winter. That’s when the results automatically follow. I’m looking forward to that now. I’ll have another strong month of racing and then mentally pull the plug and then set big goals again.”