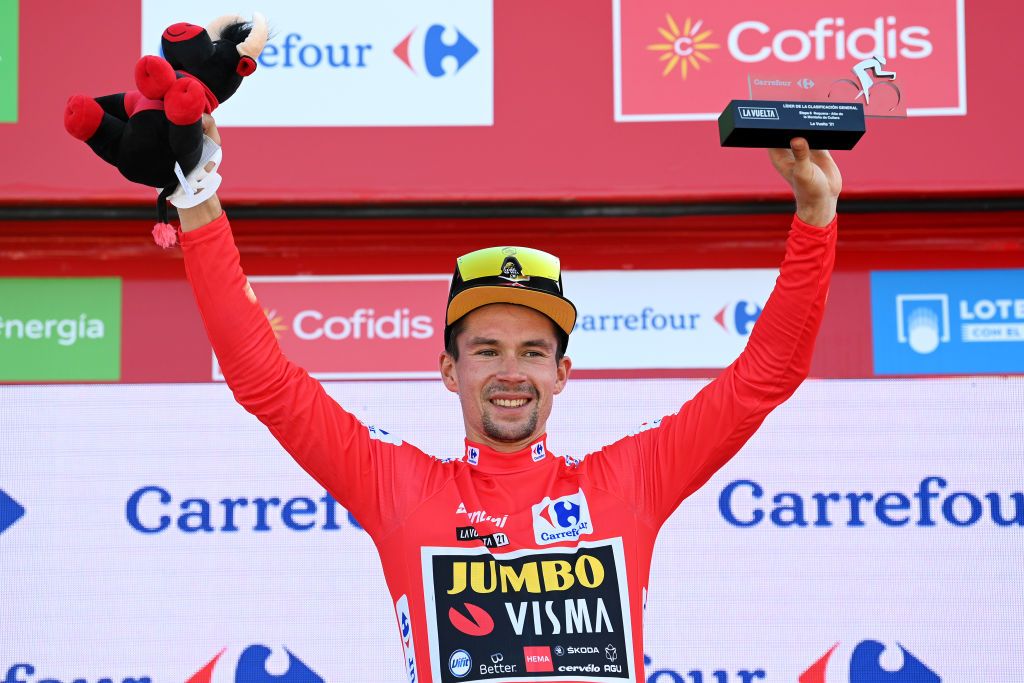 Primož Roglič didn’t particularly want to regain the red jersey of the Vuelta a España this soon, but a five-second overall deficit and a short, steep climb to the finish at Cullera meant that the Jumbo-Visma leader was always likely to do so.

In the final 300 metres of stage 6, Roglič did as he is wont to do in such situations. Like the scorpion of fable, he couldn’t help it. It’s in his nature. A crisp acceleration brought him clear of the dwindling group of favourites, and he quickly closed to within breathing distance of stage winner Magnus Cort (EF Education-Nippo), the lone survivor of the day’s early break.

With race leader Kenny Elissonde (Trek-Segafredo) dropped at the bottom of the climb, Roglič was already effectively guaranteed another stint in red by that point, and so he availed of the opportunity to put some time into his direct rivals for overall victory. “I had good legs, let’s say, so I did a little sprint,” he said of a searing effort that carried him clear of the rest of the podium contenders.

Second place on the stage netted Roglič another six seconds in time bonuses, and he picked up another eight seconds in real time on chief rival Egan Bernal (Ineos Grenadiers) to boot. In the overall standings, he now holds a buffer of 25 seconds over Enric Mas (Movistar), with Bernal fifth at 41 seconds. Small wonder, then, that Roglič smilingly couched the podium and media duties of the race leader as first world problems.

“Sweet worries,” Roglič said. “It’s always nice to have red, eh, especially if you can have it at the end of a Grand Tour. We are super happy that first of all I managed to get through the stage.”

Roglič took the maillot rojo thanks to victory in the opening time trial in Burgos last Saturday night, and he managed to rid himself of it when his Jumbo-Visma squad allowed the Rein Taaramäe (Intermarché-Wanty-Gobert Matériaux) and the breakaway considerable leeway on the road to Picón Blanco. Try as he might, however, he can never seem to stay out of the lead for long at this race.

Friday’s stage to Balcón de Alicante will mark the 28th time he has worn the red jersey in just 46 Vuelta stages.

It seems likely that Roglič will seek to find another temporary home for the red jersey in the coming days rather than attempt to defend the lead all the way from here to Santiago de Compostela, still more than two weeks away. The opportunity to do so might even arise on stage 7, which features six climbs, including the category 1 ascent to the finish. Roglič didn’t dismiss the idea in Cullera on Thursday, though he insisted the strategy would be decided in tandem with his team.

“I don’t really know, eh, I have to check it. We always see day by day so obviously I don’t know any of the plans. I’ll have to check tomorrow’s stage and we’ll make a plan together,” he said.

“Anything I say now would be without thinking. But definitely we have to race in the way that makes it more easy that we have the red jersey in the last week – and at the end of the Vuelta.”

As Roglič bore down on Cort within sight of the line, it was hard not to think of his ruthless pursuit of Gino Mäder atop La Colmiane at Paris-Nice in March. On this occasion, he didn’t quite catch his prey, but it was hard to say for certain whether he had simply run out of road.

“You always remember all the experiences that you have,” Roglič said. “But like I said before the start, for us the main goal was to try to be out of the troubles and see what you could do on the final climb. I had good legs, but Magnus was super strong day and he deserved the win. I’m very happy with my performance.”

Roglič’s lone race days between his abandon at the Tour de France and this Vuelta came at the Tokyo Olympic Games, and although he returned from Japan with a time trial gold medal, he admitted to a degree of uncertainty about his sharpness before the start in Burgos. Any such doubts have surely been excised in this opening week, where Roglič has been steadily accruing an advantage over the men with designs on denying him a third successive overall victory.

“We will see, eh. The thing is it’s still a super long way, it’s just the start,” said Roglič. “For the moment I think, yes, we are doing the things we have to do. The goal was also to stay out of trouble. For tomorrow and the next days, I’m not sure if we will defend the jersey, but the main goal stays the same.”