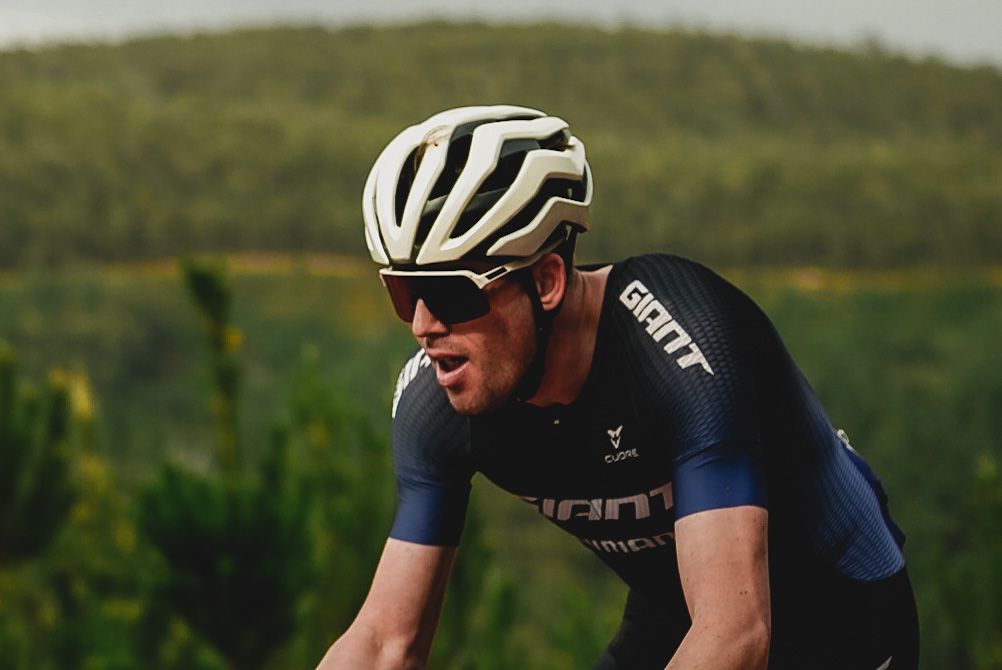 Going toe to toe with cyclists like WorldTour veteran Nathan Haas and Paris-Roubaix winner Niki Terpstra may not have been something Adam Blazevic was expecting this time last year, but the introduction of the Trek UCI Gravel World Series changed all that.

The 23-year-old Australian had made a habit of ranging across the disciplines ever since he started racing as a 10 year old, so there was no surprises in seeing him on the entry list for the second race in the new gravel series during May in Nannup, Western Australia.

But what happened next certainly wasn’t expected, with the Giant Australia Off-Road Team rider getting the better of race favourite Haas – who would later refer to him as “a bit of a hidden talent”.

“I knew I had really good form and I could be at the front of the race but I didn’t know where that would be, especially when I saw that Haas was racing, I was like, oh, this is going to be a hard day out,” Blazevic told Cycling News.

That, however, didn’t stop the Melbourne-based rider – fresh from the 228km-long Grafton to Inverell National Road Series race the weekend before – from making a mark early in the 125km gravel event.

“Going off solo like that wasn’t planned at all. It just happened,” said Blazevic. “There were a few little surges on that road and then I did one just to sort of see what would happen and I think they might have chased for a little bit, but then they didn’t really jump on it.

“For me, I was like ‘OK, this is good’ because I knew I’d done a lot of training and I’d done Grafton the week before, so I knew I could ride the race solo like that, until they caught me, and then still have cards to play once they caught me. It actually worked out pretty well because I was sort of, you know, in control of the race at that point but I still knew they could come back and it would be OK.”

What worked out even better was that it wasn’t a group that came back, just Haas who had to make a big effort to bridge the gap alone. When Blazevic pushed the pace on the final climbs, Haas had nothing left in response.

That meant Blazevic forged on alone again and was no longer a hidden talent, but now the winner of a UCI Gravel World Series race.

Winning in Australia, on home territory, was one thing but now Blazevic was heading to Europe, as part of a plan that he had before stepping to the first step of the podium in the small Western Australian town of Nannup.

Blazevic, like many Australian cyclists with aspirations to turn professional, had ice poured over his plans of heading overseas to race the past two seasons as a result of strict border closures and quarantine rules through 2020 and 2021 due to the COVID-19 pandemic. This year, however, was one of trying to make up for some of that lost time.

“The aim this year was to come to Europe anyway to try and race, and then I saw the gravel series pop up and it looked really good and I decided to add that into the schedule,” said Blazevic, who will also be Kermesse racing in Belgium with his NRS team, Giant Racing. “Western Australia was to see how it went for me”.

Blazevic had ventured overseas to race cyclo-cross in 2017, lining up at a World Cup and the World Championships as the reigning U19 champion, and then returning to race in the U23 category during the 2018-2019 season. The leap from the only-recently emerged Australian ‘cross scene to that in Europe was substantial and at the U19 World Championships in Bieles he came 51st. As a 20-year-old in 2019, he raced the U23 category in Bogense and came 61st.

It’s no surprise, then, with that experience that Blazevic – even though he may have had Nannup as evidence the form was good and the racing suited him – wasn’t counting on being right at the front when the racing moved to Europe during the next round in France on June 5.

“After Western Australia it changed a little bit … I thought maybe I’m going to be able to aim for something a little bit more. But then going to France, you see some of the riders that were turning up, and I wasn’t sure again exactly how well I could go at the event. But then you know that event ended up going pretty well too,” said Blazevic, in something of an understatement.

Riding with road pedals and shoes on his TCX Advanced Pro gravel/cyclo-cross bike, as he did in Nannup, and adding slicker tyres to make the most of road section, Blazevic was again happy to put in some surges to try and break things up on the climbs. Though not everything went completely to plan this time not least of all because of an early mechanical and late flat, but “that’s just part of off-road racing”, was Blazevic’s matter-of-fact response.

There was clearly no room for disappointment, with the outcome still being a third place behind Team TotalEnergies’ Terpstra and Piotr Havik (Westland Wil Vooruit).

“I was really, really happy. I’ve never come over to Europe and just, the first race after being here for a week, gone and got a result.”

The Australian, who is studying mechanical engineering, is now training in Girona and then heads to Poland to take on the next round of the series on June 18 – a 100km race with 1,950m of elevation gain in the Izerskie Mountains. The Gravel Adventure delivers a steep climb early in the race, which starts and finishes in Świeradów-Zdrój, and the course in the south-west of Poland also includes a small amount of muddy and narrow single track.

After Poland, the series heads to the United States, with the Highlands Gravel Classic on June 25 in Fayetteville, Arkansas and the Jingle GX Gravel Race in Amana, Iowa on August 6. Blazevic, however, won’t be following the gravel racing there, as he’ll instead be racing kermesses in Belgium with his Australian-based road team.

However, he’ll turn his attention back to gravel when the racing returns to Europe, staying to take on the Gravel Grit n Grind in Sweden and Houffa Gravel in August, before heading back to his home state of Victoria to take on the second round being held in Australia – Gravelista in Beechworth.

Blazevic said there’s little difficulty in plotting out training that suits both his road and gravel ambitions, with his Grafton to Inverell road race the weekend before Nannup clearly not having done any harm, but the racing itself is vastly different.

“At the end of the day, the strongest ride is going to win in a gravel race, even if they have issues,” said Blazevic. “The racing is full gas, there is no rest all day. It’s not like a road race where you let a break go and you sit up. The racing is just on.”

With the combination of cross discipline skills and ability to go “full gas” over the Gravel World Series distances, Blazevic has clearly found a place in the cycling world which plays to his strengths. But is a career in the relatively-new discipline of gravel racing the aim?

“I want to go professional riding my bike, that’s the goal for me,” said Blazevic when asked to outline his dream scenario. “I just don’t know what that’s going to look like just yet.

“Racing on the road would be really cool. Whether it’s possible to do that off-road on the gravel, I’m not sure yet, but I would say the big goal for me is to try and be riding my bike full time. But obviously, you know, it’s a super tricky thing to do. So I have just got to keep working hard and see what happens and see what eventuates from this year.”