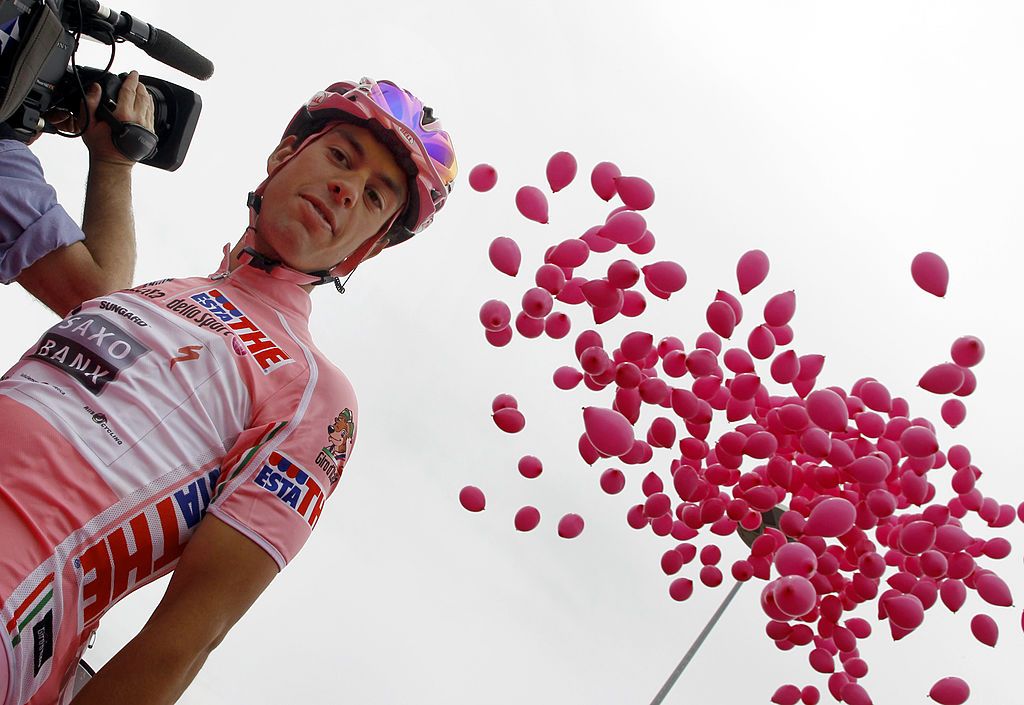 An illness-forced abandon on stage 19 may not have been the ending to 13 years of Grand Tour racing that Richie Porte was looking for at the 2022 Giro d’Italia, but as the 37 year-old said last week “you just never know what is going to happen in the Giro”.

The Australian knows all too well about the highs and lows of the Italian Grand Tour. He slipped on the pink jersey during his race debut in 2010 and ended in white, then helped Alberto Contador to victory the next year only to later have a cross put through that result. It is also an understatement to call it a challenging run in 2015, when he got his first and only chance to chase the maglia rosa in earnest.

After that calamitous 2015 edition, blighted by a puncture, penalty and a crash, the Tour de France demanded most of his attention until this year, when he finally returned to the Giro. That is the Grand Tour where he found his greatest successes, both as a support rider and chasing his own results, which included a victory in the stage 3 Cholet time trial in 2018 and third overall in 2020.

Yet Italy somehow still seemed a fitting venue for his final Grand Tour, ending it, where it all began. Now that his last Giro has been run and we take a look back at the moments that made the Corsa Rosa a race to remember, and sometimes to try and forget, for Porte.

Porte was just months into his first year as a professional cyclist with a WorldTour team when he lined up at the Giro d’Italia in 2010 for Saxo Bank. He had given some glimpse of his promise in Europe already. While racing with the Australian-based Continental Team, Praties in Italy in 2009 he had taken two stage victories and a one-day race win at UCI classified events. Then with Saxo Bank, in the lead-up to the Giro, he took a stage win and tenth overall at the Tour de Romandie.

It was a promising career start, but Porte and the team were going into that year’s Giro with modest GC expectations as the team’s big climbing stars, Fränk and Andy Schleck, were focussing on the Tour de France that year. The focus for Saxo Bank in Italy was more on the sprints, with fellow Australian Baden Cooke on the squad.

“If I play my cards well I would love to be able to fight for a stage win somewhere but realistically I will be going there to improve as a bike rider, I know I will be suffering in the latter part of the race.”

The expectations, though may have begun to rise right from the very first stage, with Porte taking sixth on the opening time trial. His consistent performances of week one stretching through to a second week, in which Cooke abandoned. Then a sortie in the breakaway on stage 11 on a lumpy and wet day of racing to L’Aquila rode him right into the maglia rosa, which he held for three days until being unseated by the 18.9km climb of Monte Grappa. Still, Porte held firm and finished seventh overall and took the white jersey.

With that performance Porte not only joined Cadel Evans – who finished fifth – high up on the results table but also earned himself a place in the conversation on potential Australian Grand Tour contenders, which before then had often started and finished with one name.

“He’s been in hiding, but now everyone knows his name and what he’s capable of,” said Evans after crossing the final line.

Porte may have had a taste of wearing the maglia rosa in 2010, but he was under no illusions when he lined up at the 2011 edition of the race that he’d been in pursuit of another high place on the GC. The team was fully-focussed on winning the pink jersey, but this year was all about Alberto Contador, both on and off the road. Contador was racing while the Court of Arbitration for Sport was in deliberations over his positive test for Clenbuterol at the previous year’s Tour de France. It didn’t stop him and Saxo Bank stamping their authority on the race, taking the maglia rosa on stage 9 and holding it right through to the end.

However, that number one spot on the results table didn’t remain. Contador was officially stripped of the title by the Court of Arbitration for Sports (CAS) following a doping suspension related to the 2010 Tour de France.

What did last, however, was the experience Porte gathered along the way. The striking of Contador off the results list, also retrospectively gave Porte his first Grand Tour stage podium as his fourth place in the final time trial in Milan turned into a third.

2015 – The puncture, the contorversial penalty and the crash

The 2015 Giro d’Italia seemed as if it could be the Grand Tour where Porte delivered on the promise he had displayed five years ago with his impressive debut. He had now raced all three of the major tours, taken more stage podium places and had seven Grand Tour’s in his legs as well as the jersey of the Australian time trial champion on his back. More importantly though, instead of working toward someone else’s success, Porte, who had shifted to Team Sky in 2012, now had a strong team lined up to try and help him beat his former leader, Contador.

It was a Giro that started well enough, with Porte sitting in third overall, 20 seconds back from Contador, but that initial success deflated as quickly as his punctured tyre on stage 10. The flat came at seven kilometres to go, and while Porte’s time loss over the line was just 47 seconds, it was after the stage that the full impact would unfold.

In a show of national camaraderie, seeing Porte’s predicament Simon Clarke – who was racing for GreenEdge at the time – handed over a wheel to help out his fellow Australian. It was a gesture that ended up being costly in the end, though, with Porte docked a further two minutes because of the “non-regulation assistance to a rider from another team”. That meant he dropped to 12th on general classification, and was 3:09 behind leader Contador.

Then on stage 13, Porte was brought down by a crash within sight of the three kilometre banner that marked the zone where time losses would not have counted. That stretched the gap to 5:05 but the impact of the fall had far greater consequences in the following stages. A bruised and bandaged Porte shed even more time in the time trial on stage 14, usually a strong suit, and then dropped completely out of contention by crossing the line more than 27 minutes behind the leaders on a mountainous stage 15. The crash was clearly taking a toll and It was no surprise when Porte, announced, on the second rest day, that he wouldn’t be continuing.

“I fell heavily on my knee and hip which caused me a lot of pain on Saturday’s time trail and yesterday’s stage,” said Porte. “I just wanted to keep trying and give it everything but now the medical team have advised me not to continue.”

So ended Porte’s first and last all out GC attempt at the Giro d’Italia.

Seven years had passed since Porte’s last appearance at the Giro d’Italia. Since that fraught Giro experience, Porte had raced one Vuelta a Espana and seven editions of the Tour de France, both in support roles and as a team leader. He’d broken through to take that long-sought Grand Tour podium, with third at the 2020 Tour de France and had settled into the last couple of years of his career as a super domestique.

That again was the role he was playing at his final Grand Tour, hoping that he would be able to help support Richard Carapaz in the mountains and be part of a maglia rosa winning team. What he probably didn’t see coming though was that it would be another Australian who would prove the biggest obstacle to that target.

Carapaz entered the race as the clear cut favourite, with the Ecuadorian expected to make it three wins at the Italian Grand Tour in a row for Ineos Grenadiers. The rider had proven winning capability, with Carapaz having won in 2019 when he was racing with Movistar.

Plus with a strong team, including the experienced Porte and the young climbing talent of Pavel Sivakov to keep Carapaz company deep into the mountain stages, it seemed little could stop Porte going out as part of the winning team. All was going well heading into the final week with the Australian turning himself inside out for his leader and his leader looking in command.

The plan looked to be working, as Carapaz held the maglia rosa before the final two mountain stages before the final week, perhaps with a slimmer gap to Bora-Hansgrohe’s Jai Hindley than he would have liked, but that didn’t seem too much of a concern as the time trial battle at the end would likely tip the balance in his favour.

Then things started to go a little astray on stage 19, just before the final decisive mountain stage. Sivakov crashed and Porte wasn’t well, gastro had caught the rider out, and he was dropped on the climb and reportedly throwing up while riding. This wasn’t the Grand Tour ending Porte had been looking for, but it was the one he got, having to abandon on stage 19 and leave Sivakov as last man standing in the mountains for Carapaz ahead of that final crucial stage.

Still Carapaz looked solid, and even as Porte left the race there was every expectation that his leader would still ride into Verona in the maglia rosa, but that plan came unstuck in those final kilometres of the final climb of the final mountain stage, with the seemingly unbreakable Carapaz shelling time to Hindley as he struggled to keep the pedals turning. A three second lead turned into a 1:25 deficit, far too much to pull back on a time trial of just 17.4km.

Would Porte’s presence on that mountain made a difference? We will never know but, even with the outcome as it is, the Giro has perhaps still provided a fitting finale for Porte after all – just as one of Australia’s best GC riders turned his last pedal in a Grand Tour, the career of another has launched into full flight.