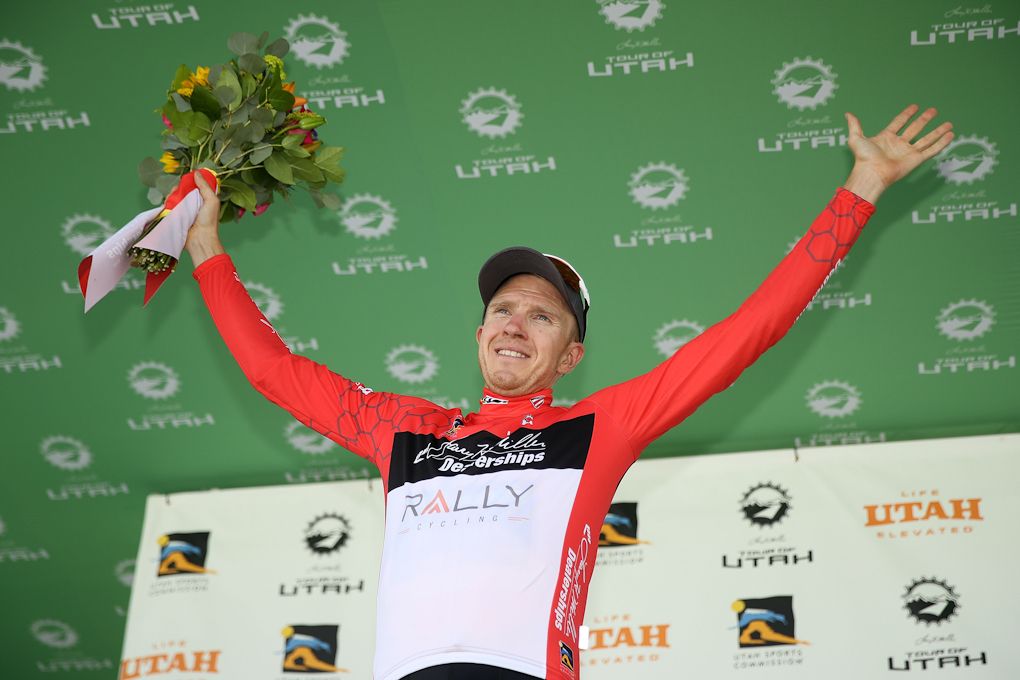 Rob Britton made it official Wednesday that the 2021 season was his last dance in a 12-year pro road cycling career. The former Canadian time trial national champion spent the last six seasons with Rally Cycling.

One of his favourite results was the overall title at the 2017 Larry H. Miller Tour of Utah. That same year he added stage wins at the Tour de Beauce and podiums at Joe Martin Stage Race and Amgen Tour of California, and followed in 2018 with the GC title at Tour of the Gila.

Since 2019 top race results began go face, the Canadian title would be his final road victory that year, as well as top 10s in the Tour of Utah and Amgen Tour of California. He knew it was time to uncleat and step aside from road racing when “I kind of lost my love” for racing.

“It’s a hard decision to make, obviously, because it’s what I’ve done for the last 10 years but also I really enjoy most of what we get to do as professional bike racers. The problem was racing is the biggest part of what we do, and at the end of the day, I kind of lost my love of that or at least my passion changed directions,” Britton said in a statement on the Rally Cycling web site.

“You have to put in the work. If you do, you’ll be rewarded. Then you can do what you love and still call it work.”

Britton was a leader and worker. The team paid tribute by saying, “Britton goes down as one of the team’s strongest-ever stage racers.”

At the beginning of his career, Britton did not have high hopes. On a social media post, he recalled that he wasn’t sure of his skill level.

“Being a professional cyclist has been a dream come true for me. When I grew up riding around the roads of Regina, Saskatchewan no one had ever been a ‘pro roadie’ before and quiet [sic] frankly my aspirations to achieve this bordered on delusions of grandeur! I was SO bad! But I had belief,” he posted to Instagram.

“Over the past 12+ years I’ve raced and ridden my bike in more places than I can remember, have made friends with so many incredible people along the way and have enough memories to last a couple life times. With the exception of my wife, cycling has been the love of my life and it always will be.”

His most memorable career moment he said was securing the GC title at the 2017 Tour of Utah, taking the leader’s jersey on the stage 3 time trial and holding it for four more days and the attack-riddled final stage with an uphill finish in Salt Lake City.

“Fighting for position into the climb, the chaos on the climb, crossing the line, knowing I had won, and then almost immediately after Ricki showing up out of the blue in the crowd after I talked to her in Calgary the night before (and said don’t come). I’ll never forget any of that.”

Just last week, he took wedding vows with Ricki, so it’s been a busy October off the bike. The Canadian competed this season in the Tour de Suisse and Volta a Portugal as well as a series of one-day races in France in September. He was part of the team that helped Arvid de Kleijn take the stage 1 victory at Presidential Cycling Tour of Turkey in April.

Britton said he’d miss his teammates as well as the environment that surrounds the sport, such as the “intensity and the energy”of fans at the races.

“Very few people ever get the opportunity to call themselves a professional athlete but even fewer of those have the chance to call time on their own career. I love this sport dearly, it’s given me so much of what I have, but I’ve seen first hand what happens to the guys that push it too long, and I never wanted to be there,” the 37-year-old said.

“There is so much I want to do in cycling and life is way too short not to take a few chances along the way. This isn’t the end of my story, it’s just time to write the next chapter.

“To everyone who’s cheered for me along the way, believed I could do this (even when I didn’t) and especially those who thought I should give it up. THANK YOU ALL and I can’t wait to see where the next path leads me.”