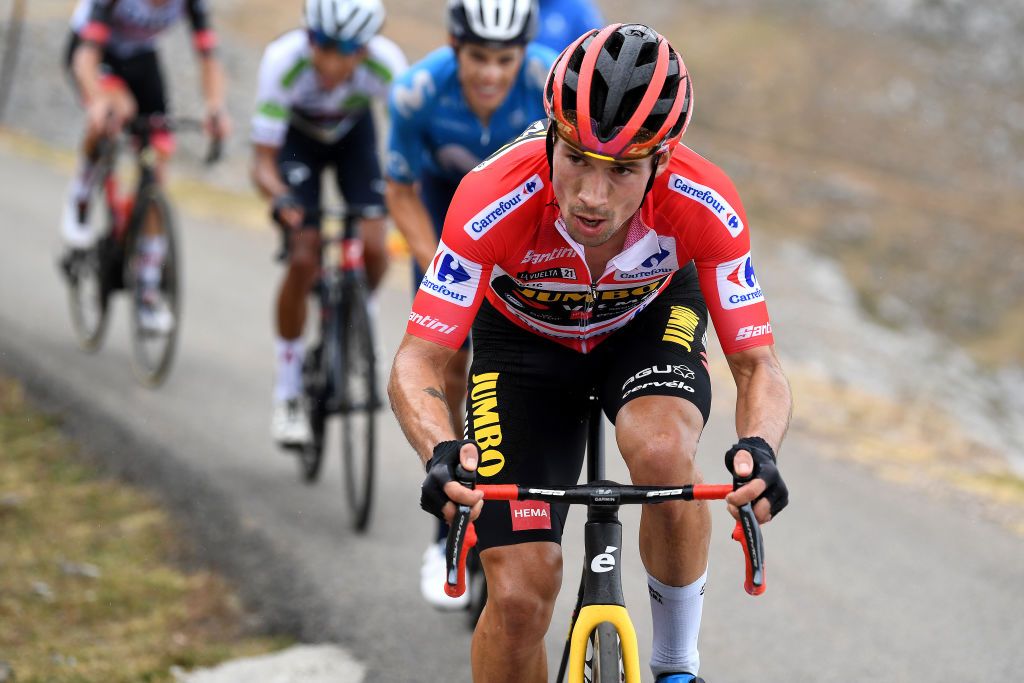 Primož Roglič (Jumbo-Visma) may have collected his 50th Grand Tour leader’s jersey on Friday in the Vuelta a España, but the Slovenian insists that he is still far from certain that total will reach 52 late on Sunday evening.

After a fast, fraught, but incident-free stage 19, Roglič has a 2:30 advantage over closest rival Enric Mas (Movistar). With a mid-length time trial coming on Sunday, as Olympic champion in that speciality and winner of the Vuelta’s opening prologue, he looks to be in pole position for a third straight victory.

Yet Roglič warned that Saturday’s final densely hilly stage through Galicia offers a big challenge. And as he pointed out with somewhat dark humour, “from my own experience, I know a lot can happen in final time trials.”

Roglič was referring, of course, to the last-minute debacle he suffered in the 2020 Tour de France at the Planche des Belle Filles, where Tadej Pogacar (UAE Team Emirates) ousted him from yellow at the last possible instant.

On top of that, he faces a very tough road stage on Saturday. It ain’t over, as the saying has it, ’til it’s over.

Asked whether he would have preferred a major mountaintop finish for the Vuelta’s final climbing challenge rather than the series of lesser ascents he will face on stage 20, Roglič said neither would be straightforward.

“I don’t know,” he said, “as far as I know it’s super hard whatever it is. Also today, that was somehow a ‘transition’ stage, but it was not that easy. It was difficult from start to finish, just chasing down that break. So I have to be ready tomorrow [Saturday], and hopefully we’ll do well.”

The Slovenian has managed, partly thanks to an unexpectedly tenacious grip by Wanty-Gobert’s Odd Christan Eiking on red for eight days, to avoid many of the external obligations that being race leader can impose. And he recognised that could be an advantage.

“For sure it helps because there are quite a lot of things to do and it’s quite an effort, day after day after day,” Roglič said. “It’s a three-week race, so every little detail counts. Hopefully I’ll have enough energy left to finish it off.”

But now for all he’s back in red, Roglič denied, in any case, that he was ready to be crowned champion, two days out.

“It’s a big day tomorrow [Saturday] and from my own experience I know a lot can happen with a last time trial,” he said. “There’s still some work to do for us.”