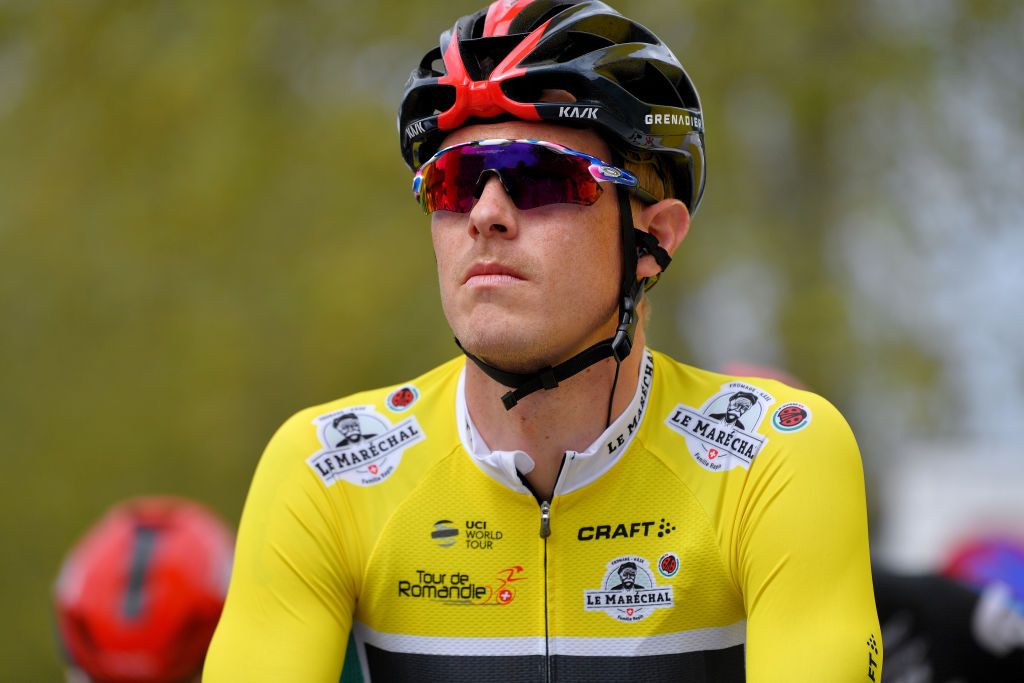 Tour de Romandie leader Rohan Dennis (Ineos Grenadiers) said he’ll be fighting to keep the yellow jersey on his shoulders as the terrain toughens on stage 2 but that ultimately if the team needs him working on the front for Geraint Thomas or Richie Porte at any stage during the six-day tour, that’s exactly where he’ll be.

Ineos Grenadiers scooped up the top three positions at the prologue with Dennis finishing ahead of Thomas and 2017 winner Porte. Following the 4 kilometre time trial, the trio then also held their spots at the top of the overall leader board on stage 1, which came down to a reduced bunch sprint.

“We just rode a good tempo. Made sure we kept the breakaway within a good distance to make sure the sprinters teams could come up and help during the stage. It was pretty straightforward really,” said Dennis after the stage.

Peter Sagan (Bora Hansgrohe) won the sprint to the line in Martigny, beating Sonny Colbrelli (Bahrain Victorious) and Patrick Bevin (Israel-Start Up Nation) as the Ineos trio made it in safely with the bunch. The margins on the overall remained largely intact, with the nearest competition for Ineos sitting 11 seconds behind Dennis. Many of the GC threats – such as Miguel Ángel López (Movistar), Wilco Kelderman (Bora Hansgrohe), Jack Haig (Bahrain Victorious), Ion Izagirre (Astana-Premier Tech) and Steven Kruijswijk (Jumbo-Visma) – are within 30 seconds.

“Tomorrow will be more complicated. We’ll see what the legs can do,” said the 2018 and 2019 world time trial champion. “It’s a little bit more climbing than today. If I go down I’ll go down swinging but we’ve got two guys who can climb with the best in the world, so no stress for me.”

The 165.7 kilometre stage 2 from La Neuveville to Saint-Imier has five second-category climbs and the first-category La Vue-des-Alpes at 17 kilometres from the line.

Dennis may be best known for his time-trialling but after he joined Ineos Grenadiers last year the Australian proved he was far more than just an asset in the race against the clock as he helped engineer Tao Geoghegan Hart’s success at the Giro d’Italia as he tore the field apart on the Stelvio and Sestriere.

When the 30 year-old rider was asked whether it could be him that took the win for Ineos Grenadiers at the Tour de Romandie, Dennis answered that he would see how stage 2 went first.

“I think Saturday is going to be a pretty decisive day. In the end my head is saying that I’m here if the guys need me to ride on the front, even with this jersey tomorrow, then, if there is three of us, I’ll ride as the rank in the team and, those guys can fight out who is first, but I am definitely third behind them.”