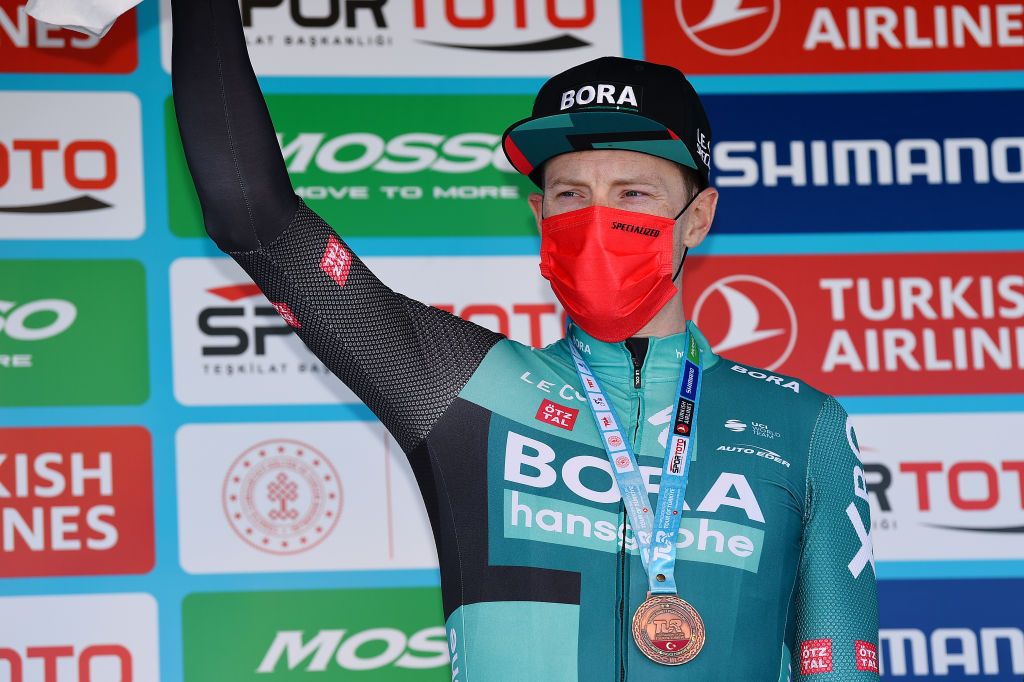 Sam Bennett is yet to find his first win of the season but with his podium place on stage 2 of the Tour of Turkey the returning Bora-Hansgrohe rider delivered a glimpse of the form he has been in pursuit of.

The 31-year-old sprinter took a second and third place at the UAE Tour in February, as he continued his rebuild after four months away from racing last season due to a knee injury, but after that two months went by where the 2020 Tour de France green jersey winner wasn’t even close to finding the podium steps again. Then on the Tour of Turkey’s Alaçati finish, Bennett not only managed to find enough speed to take third, but he did it while overcoming an unexpected easing of the pace by stage 1 winner Caleb Ewan (Lotto-Soudal), who unexpectedly turned out to be a less than ideal wheel to follow during the stage 2 finale.

“After the last corner I was sitting in Danny’s wheel and the position was very good,” said Bennett, referring to teammate Danny van Poppel. “When Caleb opened his sprint, he wasn’t fresh enough and didn’t really accelerate which surprised me, so I got stuck a little behind him while on the right side Philipsen and Groves passed. I tried to accelerate but it was already too late.”

While it may have been too late to challenge Kaden Groves (BikeExchange-Jayco) for the win, or Jasper Philipsen (Alpecin-Fenix) for second, Bennett did come out from behind Ewan’s wheel and delivered a quick acceleration to take a clear third.

“I am happy with the progression over the last weeks, and I am not far away from being really competitive again,” said Bennett. “I still miss a little top end power, but it is getting better and better.”

The team, also managed to remain unscathed in a day that was hit by crosswinds and crashes and is now looking to the stages ahead as Bennett continues to gel with his team – which he rejoined after a tumultuous final season at Deceuninck-QuickStep – and find that last missing bit of top-end power.

“The team did a good job again today,” said Bora-Hansgrohe Sports Director Bernhard Eisel. “It was important to be up front when it mattered in the crosswind, and we have been safe there. Only Matt [Walls] crashed once, but he is fine”

“A final with tailwind is always tricky. It was super nervous, but our lead-out worked really well. Also Sam is getting better and better. He just was sitting in the wrong wheel today. I think we can be happy with his progress, and I am optimistic for the remaining sprint stages.”