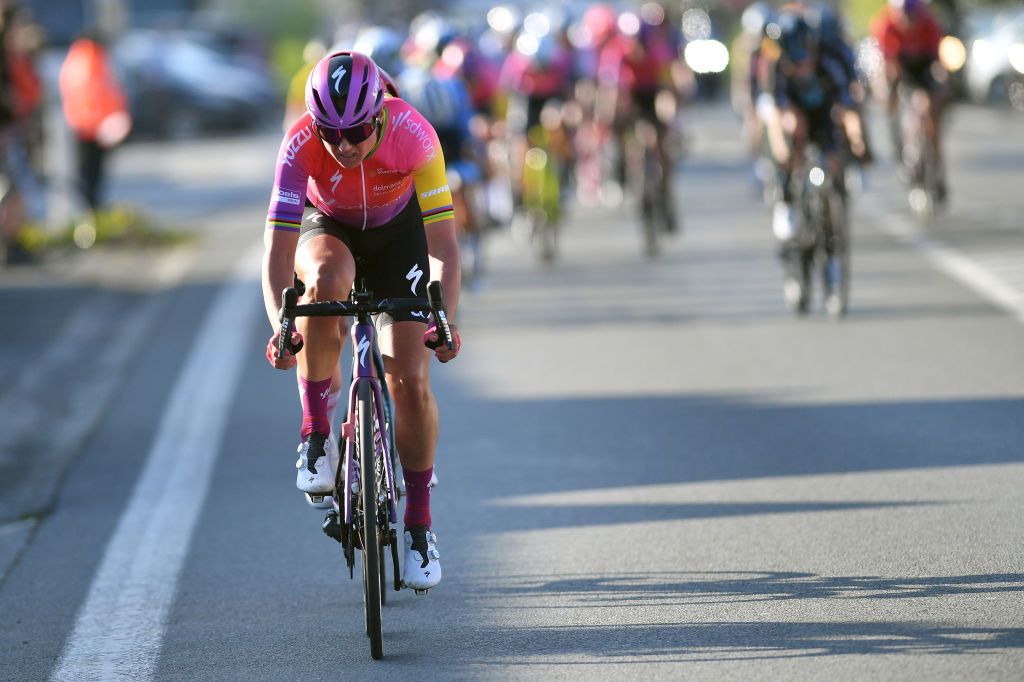 SD Worx was the only team that had all six riders in the front group in the final of Gent-Wevelgem Women and they tried all they could to prevent a mass sprint, throwing themselves into attack after attack. However, with several other teams committed to a bunch finish and no strong wind to force a selection, this time their efforts were for naught.

Then, when it came down to the sprint, Lotte Kopecky wanted to launch off the wheel of Elisa Balsamo (Trek-Segafredo) but as her teammates Elena Cecchini and Christine Majerus surged forward on the left side of the road and Marianne Vos’ Jumbo-Visma train on the right side, the peloton split into two, with Kopecky on the left and Balsamo on the right. The world champion then swung back to the left and into Kopecky’s wheel.

“I wanted to take the wheel of Balsamo but couldn’t find her,” said Kopecky. “Luckily my teammates brought me back to the front, but the initial plan was to come from behind. I missed some freshness in the sprint.”

Kopecky started to sprint with about 200 metres to go, but Balsamo quickly came alongside and passed the Belgian champion. On the last 50 metres, Vos and Maria Giulia Confalonieri (Ceratizit-WNT) also came past, leaving only the unrewarding fourth place for Kopecky.

It had been 58 kilometres earlier when Kopecky had been the one to start her team’s flurry of attacks, opening up the aggressive racing style that worked so well for the squad at Strade Bianche. Kopecky got away with Anna Henderson (Jumbo-Visma), Kasia Niewiadoma (Canyon-SRAM), and Liane Lippert (Team DSM). After the first ascent of the Kemmelberg, they were joined by Marta Cavalli (FDJ Nouvelle-Aquitaine Futuroscope), Henderson’s teammate Coryn Labecki, and SD Worx’ Marlen Reusser, but the advantage over the peloton was never large and Trek-Segafredo brought the move back after 14 kilometres.

Chantal van den Broek-Blaak was the next SD Worx rider to try, pushing hard up the Baneberg, but to no avail. After the second time up the Kemmelberg, Christine Majerus was briefly part of a three-rider front group until the next group came up.

On the last 30 kilometres through Ypres and towards Wevelgem, the team hardly ever let up attacking, with Van den Broek-Blaak and Cecchini especially active while Kopecky then saved herself for the sprint. The most promising move occurred 12 kilometres from the finish when Cecchini was part of a group of 13 that got a gap on the rest of the peloton.

Majerus also bridged up to the group on her own soon after. But without any real cooperation in the group, Trek-Segafredo again eventually closed the gap. Next 22-year-old Lonneke Uneken made another attempt, taking four others with her, but this, too, was shut down by Trek-Segafredo’s chase work. Only then did the team switch to sprint preparation mode where Kopecky came up just short in the chase for a podium spot.