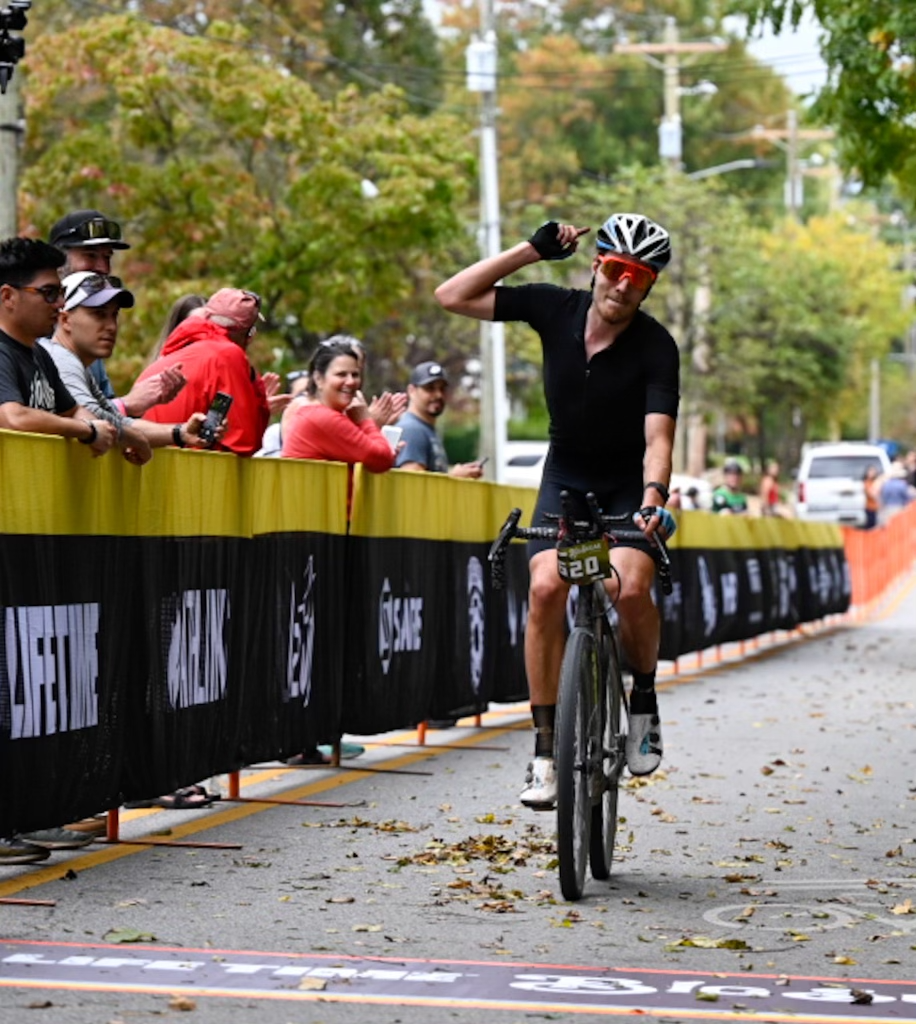 Canadian Adam Roberge had a short transition from road racing to the gravel grind in 2021 and it quickly paid dividends with a third-place finish at Gravel Locos. One week later, he placed fourth at Unbound Gravel. He completed the season with a win at the inaugural Big Sugar Gravel.

It was no surprise then that the 24-year-old Canadian was selected as one of 30 male riders to compete in next year’s Life Time Grand Prix series, which combines three gravel races with three mountain bike races. There were also 30 female riders that made the cut from the application process, and all riders will vye for a $250,000 prize purse with equal payouts for the two elite fields.

Roberge planned to continue his momentum with gravel in 2022, competing in all six events at the Life Time GP as well as the Quadrupel Crown of Gravel, four Belgian Waffle Ride events.

“I couldn’t be more excited about it. My calendar is going to focus on the Life Time series, six races, and the Belgian Waffle Ride four-race series,” Roberge told Cycling News from his snow-covered home in Quebec. “I think it will make the season all that more exciting. I think in terms of professional level of cycling, it’s [Grand Prix] the first big step for gravel.”

Early in his career he rode mountain bikes, and the past five years he focused on the road with North American Continental programmes Silber Pro Cycling and Elevate-Webiplex Pro Cycling. He was fourth on GC at the Joe Martin Stage Race, but earlier in the year when he knew road races would be few and far between in North America, he turned to gravel.

“I just added gravel week by week. Every race preparations are so different, I make it a project,” Roberge told Cycling News. “My first gravel race was Gravel Locos. It was my prep for Unbound. In a way it was new, but it wasn’t new with my mountain bike background. At the end of the day it is just racing.

“For sure there are some details that I didn’t know, but I was kind of lucky. I always had some other riders with me who could give me tricks and tips, and that was good. I would say the first trick, which everyone learns, is about tyre pressure, especially coming from road. I didn’t understand how low you can ride tyre pressure, and leaning on the lower side.

“With all the good results I had, I decided in October to sign with an agent. There’s way more email and responsibilities, but it’s fun to work by yourself. I will be missing the team ambiance,” Roberge said, referencing his move to privateer on the gravel scene again, while his plans to return to Elevate-Webiplex were not confirmed yet.

Organisers of Life Time GP announced an expanded elite field of 30 women and 30 men last week, which will split the prize purse of $250,000 among the top 10 riders based on riders with the most points accumulated from five of the six races. First place will earn $25,000. Three events—Crusher in the Tushar, Chequamegon MTB Festival, Sea Otter Classic—offer individual event purses, which will also be available to the Grand Prix series participants.

“I was planning to do pretty much all of them in the Life Time series. The only one I was not sure about was Sea Otter. I did a lot of cross-country racing in my life, and if there is one thing I don’t crave to do again that is cross-country racing, like just lapping around. That’s what I love about gravel, there’s one big lap to do. I really need to double down on riding more on my mountain bike, I think that’s going to be the key.”

He amassed consistent results in Belgian Waffle Ride events from July to October and captured the series title in three races, the Tripel [sic] Crown in 2021. The Quadrupel Crown of Gravel in 2022 will add its Kansas race to the San Diego, North Carolina and Utah events for a series prize, paid out to the top three men and women overall, and at about a 10th of the sum of Life Time. Each Waffle ride also pays its own prize purse to the top-five finishers, men and women.

He felt the second gravel series by Life Time was not just a great opportunity on the personal side, but a boost for the growth of the sport in general.

“In a way I am very grateful to Life Time for what they do and I understand why they put the limits on the number of riders. But for someone who is coming into gravel right now, for them it is a disadvantage. So that’s the only downside, you have to start from somewhere,” Roberge said.

“I think getting all that money and making sure all the big guys in gravel are ‘all in’ is just going to make this sport grow. It’s going to give the sport a lot of attention, a little bit like triathlon and Ironman when they got big events and big names.

“The only thing I’m scared of is that we hear the UCI wanted to do some races, but we haven’t heard anything from them yet. That could be a real problem I feel with the schedule. But other than that, I was actually planning to do all those races anyway. They are all fitting really well and I don’t have other big races that are happening at the same time.”

When asked about sanctioned gravel races and a World Championship event to be unveiled, the UCI told Cycling News that a calendar will be published next February with dates and locations. Speculation among the gravel community was that a World Championship would be held in the US, and the impending announcement could include sites for the first three calendar years.

For now, the former Canadian junior road champion will focus on new gravel pursuits. He looks forward to more dirt, dust and mud, where “anything can happen”.

“So the Life Time stuff is an omnium, it’s really different, and you have one race you can really play with. You never know what’s going to happen in gravel. The Belgian Waffle Ride is very different because it’s timed. If something bad happens you really have to find a way to not lose too much time. The race will not be won if you lose time, but if you lose, say 25 minutes on someone at one of the races because you have a bad day, the series could be done for you. I like that it’s not the same way for both races,” Roberge observed about the series formats.

He said his experience on the road and his expertise from mountain bike racing gave him an advantage for the Life Time series in particular, since the first event was a 75-mile cross-country event in April. And he was especially excited about defending his Big Sugar title, as that race was the final in the series, and could be a decisive tie breaker if needed.

“With my road background I really learned to be very consistent. When you are a GC guy you cannot afford to have bad days, so I think that  is one of my cards. The second card is that in the winter, I ride a fat bike. I do pretty much all my volume rides on a fat bike, to make sure my technical skills are there. And in the summer I still do a lot of mountain biking, and rugged gravel. I’m not saying I am perfect in both of them [road and mountain bike], it’s far from that, but I think it’s a pretty good argument,” Roberge said in a video he posted on his social media.

“The final event of the series, Big Sugar Gravel, is actually mandatory, so that is actually perfect. I’m going to have to defend the Big Sugar title and it’s going to be a big party. Big Sugar, I think, is a great course, a great way to finish it all off. It’s $25,000 for first place. I’m planning to go for the win.”

Fuego 100K cross-country MTB at Sea Otter Classic, April 9: It looks like an Olympic-style cross-country race, the only difference it is that it’s not technical, it’s super-fast and most of it on grass or on dirt. so it’s almost in a middle of a cross-country race, and a cyclo-cross race and a little bit of a criterium. There should be a peloton dynamic.

Leadville Trail 100 MTB, August 13: This one I would say is like Crusher, but longer and harder. From what I hear this is just crazy hard. The crazy thing about that is the elevation, 13,000 feet [elevation gain]. The lowest point is at 9,000 feet. That will take some altitude preparation for sure.

Chequamegon MTB, September 17: The Chequamegon MTB Festival is sort of a gravel race on a mountain bike. I heard it was super technical and I am really excited about it.

Big Sugar Gravel, October 22: The terrain on Big Sugar is a little bit like Unbound, I would say. It’s very hard on tyres. It’s about risk management. I’m going to be there to defend my title.