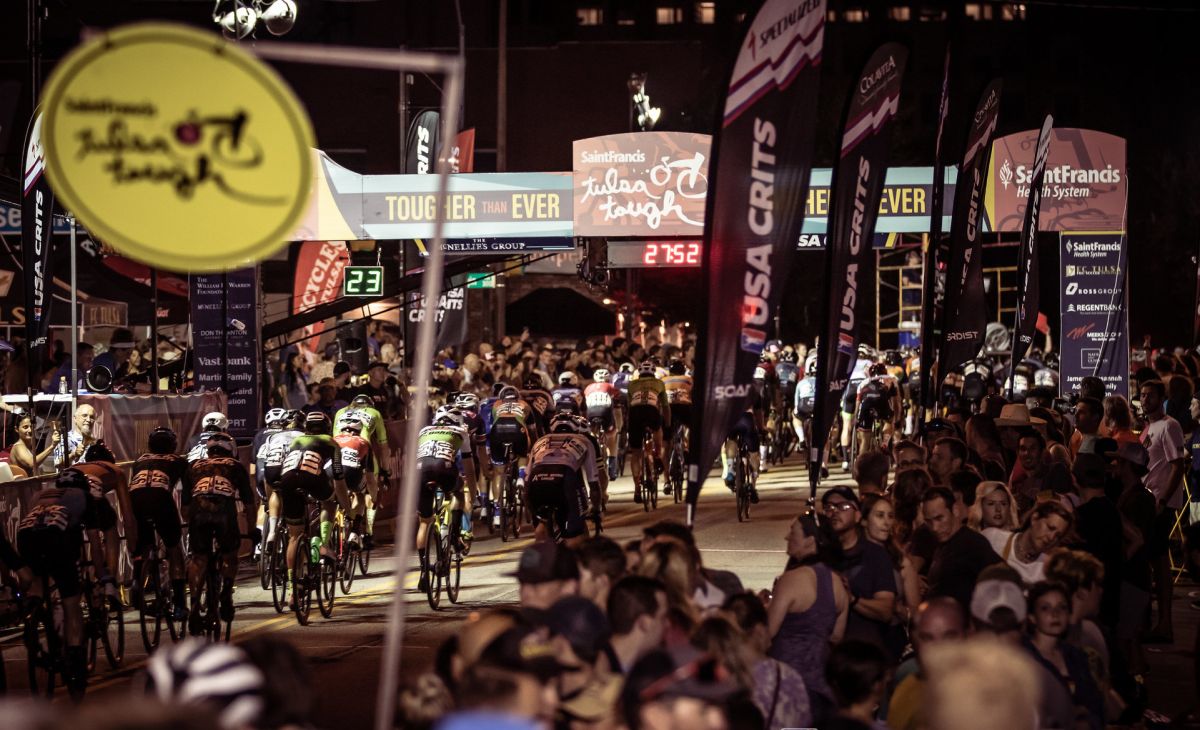 Scott Morris, the former managing director of USA Crits, has spoken publicly for the first time after it was announced that SafeSport temporarily suspended him for allegations of misconduct.

In an interview with Cycling News, Morris claimed that USA Cycling were aware that he faced charges relating to child pornography two years ago.

Both Morris and USA Crits founder Gene Dixon have provided conflicting information as to whether they ever discussed Morris’ past, while both men have claimed that certain teams are exploiting Morris’ past in order to benefit. Both have also dismissed and strongly denied accusations made by the LA Sweat team that Morris used inappropriate behaviour towards female riders in 2019.

On Sunday, it was reported that Morris was fired when news of his past was shared throughout social media. Several US based cycling teams decided to remove themselves from USA Crits with immediate effect, while a number of high-profile races made the same decision soon after.

However, Cycling News has been told that Morris was not dismissed – despite USA Crits’ initial statement – and that he actually resigned from the organisation. Not only that, but Cycling News has also discovered that USA Crits knew about Morris’ past as far back as early 2020 when a complaint was raised to USA Cycling relating to his conduct.

USA Crits, who have stated that Morris remains a ‘friend’ and ‘part of their family’ have told Cycling News that they were taking steps to remove Morris from their programme recently but that they were forced to accelerate on those plans once news of his past was made public.

Cycling News has reached out to USA Cycling for comment several times but has not received a response. It is not clear who made a complaint against Morris in 2020.

Morris was, however, suspended by SafeSport on September 14, 2021. At this point, SafeSport has not made public the nature of the allegations facing Morris, simply listing ‘Allegations of Misconduct’ next to his name.

Previously, Morris was indicted in 2008 in Georgia for 45 counts of sexual exploitation of children related to ‘movies and images of minors engaged in sexually explicit conduct’ that were on his home computer. There were 20 other counts for the same charge filed in Virginia in an earlier case. All charges were “abandoned”, according to reports, with Morris being convicted of computer services theft. He has protested his innocence, and the child abuse charges never made it to court.

Morris has claimed that some teams are looking to exploit his past in order to weaken USA Crits. However, when asked by Cycling News whether the SafeSport suspension could instead relate to a complaint based on his past by someone who wanted him out of cycling because of the charges relating to pedophilia, he told Cycling News via a phone call late on Monday evening:

“You could say that, and if that’s how you feel, then fuck off. The reality is that I know the truth. I don’t give a god damn what you think. I know that I wasn’t guilty and that the charges were dismissed. If you want to use names like I can call you a son of a bitch, if I feel like it but you’ve never examined the fucking evidence.

“You read a news article. You want to call someone a pedophile, come and say that to my face. We’ll have a conversation about it, like adults.”

Morris and USA Crits founder Gene Dixon have both claimed to Cycling News that the SafeSport suspension does not relate to any fresh charges and but the exact reason for the current suspension remains unclear. Morris has claimed that the suspension was triggered when he entered a criterium race but at the same time he and Dixon also think that someone also alerted SafeSport to his past.

“The short answer that’s been put out there was that there was a temporary finding of measures taken based on some past charges that I had 15 years ago that were dismissed,” Morris added.

“Somebody found an old newspaper article and sent it to SafeSport and for whatever reason, they never called me, they never talked to my attorneys, and they never reached out to us, but they went ahead and took that temporary measure and suspended me without ever talking to me.”

Morris and Dixon have both told Cycling News that USA Cycling were aware of the indictment Morris faced in the 2000s, a claim which has yet to be substantiated but does raise questions over USA Cycling’s possible knowledge of Morris’ history and whether they took appropriate steps.

“The reality is that these are things that USA Cycling knew about, that other people knew about, and that were dismissed years ago,” Morris said.

“I assumed that they knew because it wasn’t a secret. It was very public, and a lot of people knew. You don’t go around publicising things that you didn’t do and weren’t found guilty of.”

Both Dixon’s and Morris’ stories differ when it comes to whether USA Crits discussed the former charges with Morris once the organisation were aware of them.

“I’m not going to speak for them [USA Crits] and what they were and were not aware of,” Morris told Cycling News.

“I don’t know if that was the case or not. I don’t know when and if with the folks that I worked with [knew]. I knew that once this happened with SafeSport they did make me know that they were aware that there were charges in the past that were all dismissed. I know that currently most of them stood behind me and agreed that I would step back because obviously there was no way that I could do the job.”

“It’s not something we ever talked about. We’ve known each other for a really long time. People don’t ask you about stuff when they actually know you. I’m not just a worker who showed up one day. I’ve known Gene for a really long time. We’re friends. We’re family. We’re a small family. Gene is my friend. He’s on my side here. He understands that this isn’t about some new charges. He knows me. We spent thousands of hours together if not more. He knows I’ve done nothing wrong.”

Dixon spoke to Cycling News before 6am local time on Tuesday. He stated that USA Crits were already making plans to move beyond Morris once the SafeSport news broke but that the organisation was forced into action once L39ION of Los Angeles posted the SafeSport suspension and their stance on social media.

“We at L39ION recently became aware of several concerns regarding the organiser of the USA Crit series.  In light of these concerns we felt it was important to make a public statement regarding our future participation in their events,” L39ION of Los Angeles said in their full statement published on Monday.

Both Morris and Dixon believe that teams are currently exploiting the situation for their own good and to discredit USA Crits.

“Truthfully he resigned, that’s more appropriate,” Dixon said in a statement that contradicts the weekend’s announcement released by USA Crits that Morris was terminated.

“We needed someone to still help us and tell us what’s what and he’s been the driving force behind this for three years. We had that in place but when Legion decided that they needed to be in charge of the world of criterium racing and went ahead and posted it. There was no choice but to dismiss him totally. Although in retrospect it didn’t matter.”

When asked when he first knew that his managing director had once faced charges of holding images of child pornography, Dixon said:

“It’s kind of hard to pinpoint exactly. I can tell you the truth, and it was the same time that we found out that the charges were all dismissed. It was probably early in 2020. I don’t know for sure. If we had been aware of anything current then we would have been all over it.”

Cycling News asked why Dixon had not fired Morris on moral or ethical grounds once they were aware of the dismissed charges.

“Are you telling me that I need to be judge and jury?” asked Dixon. “He was never in contact with any underage people. I don’t even want to go down that road because charges were dismissed.

When asked if he had a conversation with Morris in 2020, Dixon contradicted his former employee but did back up Morris’ accusation that USA Cycling were aware of his past.

“In 2020, there was a complaint to USA Cycling. They looked at it, didn’t do anything and we decided that we had no reason to pursue it anymore.”

Cycling News pointed out that Morris claimed he and Dixon had never spoken about the charges Dixon said: “I don’t know. Let me think about this a bit because Scott and I… 2020… let me think what we did discuss exactly. I don’t know exactly. It might have been more centered around the complaint around USA Cycling.”

Cycling News contacted LA Sweat, another US criterium team. The squad used their Instagram profile to accuse Morris of inappropriate behaviour in 2019, stating that: “In 2019 we reached out to the founders of USA Crits to express our concerns about inappropriate behaviour coming from Scott Morris, touching female riders, sending aggressive messages and emails and withholding resources.”

Cycling News has reached out to the team via social media for comment in order to possibly substantiate their claims. They have yet to make a response of any nature.

“She just wanted to jump in for some races and didn’t want to pay for the whole season. Her answer as to call me unprofessional because that sounds a lot better than the fact she wanted to keep the money for herself. I’ve never done anything to that woman.”

“She’s riding this wave out because it makes her look good. I’ve never done anything to that woman. She sent one email where she called me unprofessional and said didn’t live up to commitments but she’s adding on stuff that she’s making up. She never sent any emails about allegations that something was done to someone.  She’s just full of crap. She’s been after me for a long time and she can say what she wants but it’s so absurd to me that she can say this. She can not like me, and that’s fine, I don’t like her either.”

Dixon then elaborated with regards to his stance that teams that tried to use Morris’ past to unsettle USA Crits and that L39ION of Los Angeles were attempting to set up a new criterium league.

Dixon and Morris, throughout both interviews, showed no sign that L39ION’s possible race plans could be entirely separate to their ethical and moral stance when it came to working with Morris or an organisation that employed him.

“My statement is that climate change is real, vaccinations work and you’d have to be naïve to think that this was about Scott’s past. There’s no doubt in my mind that this was about the personal conflict between Scott and Legion. 100 per cent,” Dixon said.