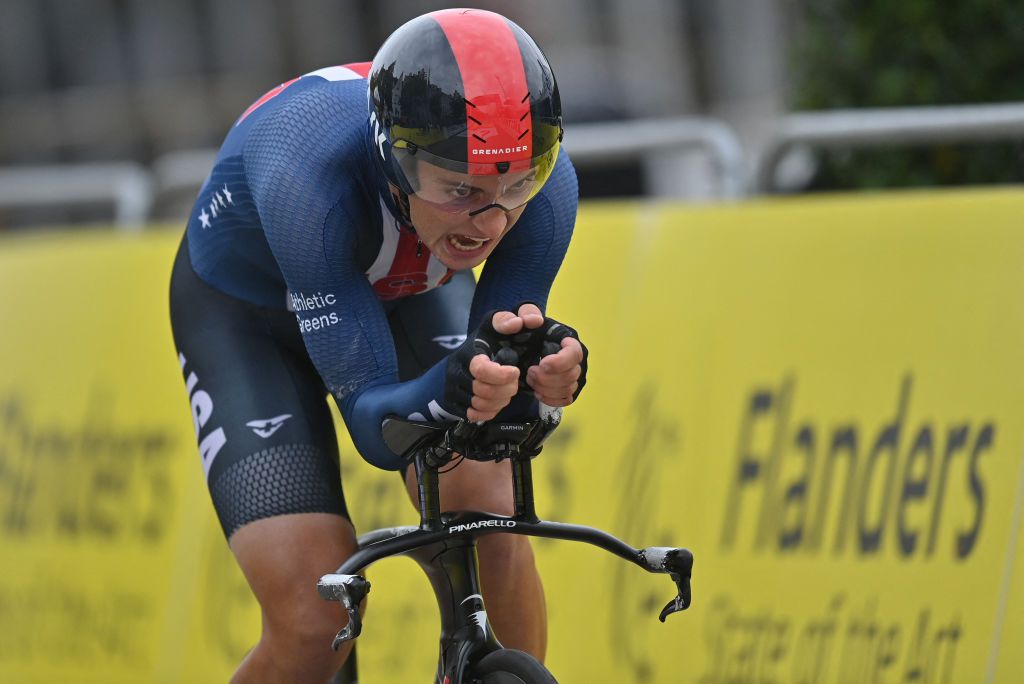 Following his junior road race bronze medal in Harrogate two years ago, Magnus Sheffield returned to the UCI Road World Championships in Flanders taking tenth place in the U23 time trial on Monday.

The 19-year-old American, who was among the early starters in the 30.3-kilometre race, finished 58 seconds down on gold medallist Johan Price-Pejtersen, but his ride was overshadowed by the pre-race announcement that he would be joining Ineos Grenadiers for the 2022 season.

Sheffield’s move was announced just 20 minutes before he set off to start his ride but he was distraction-free during his warm-up, with his phone turned off in his back pocket.

After his ride, though, he was happy to talk about the move, which will see him join the growing youth movement at the team alongside fellow new signings Ben Tulett and Luke Plapp, as well as the likes of Carlos Rodriguez, Tom Pidcock and Ethan Hayter, already at the squad.

“I’m really excited to finally announce that I’ll be joining Ineos Grenadiers for the next three seasons,” Sheffield said in the mixed zone after his time in the provisional podium hot seats early in the day.

“It’s been a dream of mine since I was young and to be able to join the team this early on in my career I think is really special and I’m looking forward to gaining the experience and all of the knowledge this team has.

“I think it’s a really good fit, personality-wise, and the team has a lot of success with young guys, so I’m looking forward to it.”

Sheffield spoke about his conversations with Ineos principal Dave Brailsford and director of racing Rod Ellingworth, noting the growing focus on talented young riders at the team, and saying that the focus on performance is what attracted him to join.

“The first conversation I had with Rod is that it’s a performance team, it’s performance-driven,” he said. “That’s the core value of the team and that’s what stood out the most to me, that I was really interested in being a part of.

“It’s also a young squad, they have some older riders, but I think Rod and Brailsford and the way they’re restructuring the team now, they want to invest in young talent, and I think it’s going to be interesting to see because it’s going to pay off in the next couple of years. The past year has been a bit difficult, but I think you’ll see the team regain its strength and rise to the top again.

Sheffield left his previous squad, Rally Cycling, in August after half a year with the US ProTeam, and, before rolling down the start ramp in Knokke-Heist, hadn’t raced since the National Championships back in June.

He said that he couldn’t say why he left the team but did say that three months without racing hadn’t blunted his performance, with disciplined solo training filling in the gaps ahead of the time trial and then Friday’s road race.

“Unfortunately, I can’t talk a lot about that,” Sheffield said of his split with Rally. “All I can say is that I’m looking forward to the next couple of steps in my career and I was really fortunate for all the opportunities that they gave me, especially in the year after Covid. I was really thankful for all the staff and riders, and I had some really good memories with the team. Like everything, there was ups and downs but I’m just really looking forward to the future now.

“It was kind of an awkward or unusual preparation I had, but I came in with not a lot of stress. I was really confident in my training leading up to this. After the Nationals, I didn’t race, and I left Rally. Then I was just on my own.

“I did some altitude training with Quinn [Simmons] and that was really good, and then I was just spending a lot of time on the time trial bike at home. I didn’t fly into Europe until about two weeks ago and I was just in Girona, just by myself. For me, I’m able to push myself really hard in training and I felt confident in just doing my own thing. I didn’t think I needed the team support or the races to prepare for this. I felt like I did everything I possibly could so…”

Sheffield’s tenth place in the time trial came after he had gone quickest of anyone through the first checkpoint. There, he was three seconds up on Price-Pejtersen, but dropped to provisional fourth at the second check, and then to almost a minute down after the final 9.5-kilometre run. Now, his attention turns to the road race in Leuven, where he’ll form part of a strong US squad.

“I went out pretty hard,” he said of his time trial effort. “That first 10 kilometres I set a really good pace and was one of the fastest at the intermediates, but I started to face towards the last 10 kilometres, and I was just trying to hold on as much as I could. I was in the hot seat and then I fell down a couple more spots. I gave everything I could, and I guess there were just some faster guys out there.

“[For the road race], we have a really strong team with Kevin [Vermaerke], Luke [Lamperti], Matthew [Riccitello] and also Sean [Quinn]. These are all really strong guys. We haven’t talked a whole lot about it, and we haven’t raced a lot of races together because there’s some WorldTour and U23 guys. But yeah, we’re going to have to see how the race plays out.

“I think it’ll be a really aggressive race. The circuit in Leuven is really hard, there’s a lot of really narrow corners and a couple of cobbled sectors. It’ll be interesting to see what other countries like Belgium, Germany, the Kiwi team is pretty strong, also the Italians – you really can’t write anyone off in a race like that, especially with the town circuits.

“I think it’ll just be a full-gas race from the start, and it might be a reduced sprint, but I can see guys just the whole race being shattered with 50 kilometres to go. I’m excited to see how it goes.”