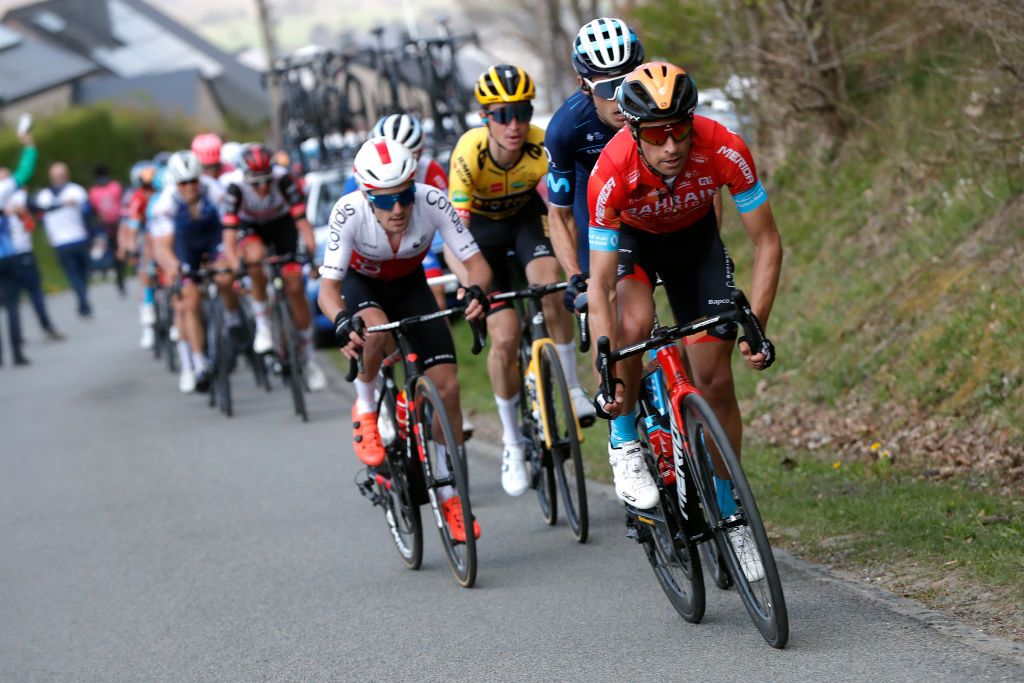 Bahrain Victorious headed into Sunday’s Liège-Bastogne-Liège with one of the strongest teams in the peloton on paper, boasting Milan-San Remo winner Matej Mohorič and La Flèche Wallonne winner Dylan Teuns among their number.

The pair were joined on the start line by former winner Wout Poels, as well as star climbers Jack Haig, Mikel Landa, and Damiano Caruso, but over six hours after rolling out of Liège, the team found themselves back on the Quai des Ardennes with just Teuns’ sixth place to show for their efforts.

Both the Belgian and Haig ended up in the chase group which crossed the line 43 seconds behind solo winner Remco Evenepoel (QuickStep-AlphaVinyl), but, like everyone else at the front of the race on the Côte de La Redoute, there was little they could do when the young Belgian decided to blast off with 29km to go.

“I guess the result is maybe a little bit disappointing,” Haig, who finished 11th, concluded after the race. “We would have liked to really fight for the podium there, but it just didn’t quite play out the way we wanted.

“Ideally, we could have had someone follow Remco, but he was obviously on another level. I think we’ve raced relatively well as a team, but we probably should have raced a little bit more aggressively when we had the numbers there. After La Redoute, Remco was away and it was very hard to race aggressively by then.

“On Roche-aux-Faucons and coming into the final, I think Remco had such a big gap that we were basically racing for second and maybe myself and Dylan should have worked a little bit better together to try and get the best result possible at the finish line because sixth and 12th or whatever it was is good but it’s not really what we came here to do.”

It was a disappointing end to the spring Classics for the squad, but the team can still head into the next part of the season with a record most around the peloton would envy, with a Monument and a Classic on the palmarès along with a host of other top-five and top-10 placings.

Having been among the teams working on the front of the peloton during the day, Landa was the first man from the team to make a move, jumping on the Côte de Desnié at 42km to go.

After Evenepoel’s attack, the team sprang into action once more, working with numbers at the front to try and bring the 23-year-old back. They initially succeeded in holding his advantage steady, but after the final climb of the Côte de Roche-aux-Faucons, where Teuns attacked several times, the chase group, cursed by competing interests and teams, only lost time to the single-minded Evenepoel.

“We had lots of guys, the most riders, and we tried to work at the front to pull hard and to bring him back, but we couldn’t,” Mohorič said after the race. “We tried to limit the gap so Dylan would have a possibility to bridge across on the Roche-aux-Faucons, but he couldn’t make a difference. Remco proved to be the strongest today and he deserved this win.”

Teuns, flying high after his Flèche Wallonne victory, said that there was hesitation in the group after Evenepoel jumped away on La Redoute, while also adding that Bahrain Victorious’ attempts to drag him back ended up having little effect.

He made several accelerations on the following climb of the Roche-aux-Faucons, having been led into the final climb by his teammates, but said that there was little collaboration after he got a gap along with Colombian climbers Sergio Higuita and Dani Martínez.

“They brought me in a good position, and I waited a little bit,” Teuns said. “I still had one teammate over this first part. Then I knew the second part was still hard. I tried four times, I think, but the collaboration was a little bit… not so good.

“I went away with three guys and there was still a chance to come back, but they had to commit fully. Then it was quite fast and the group with Valverde and Van Aert came back, and it was over.”