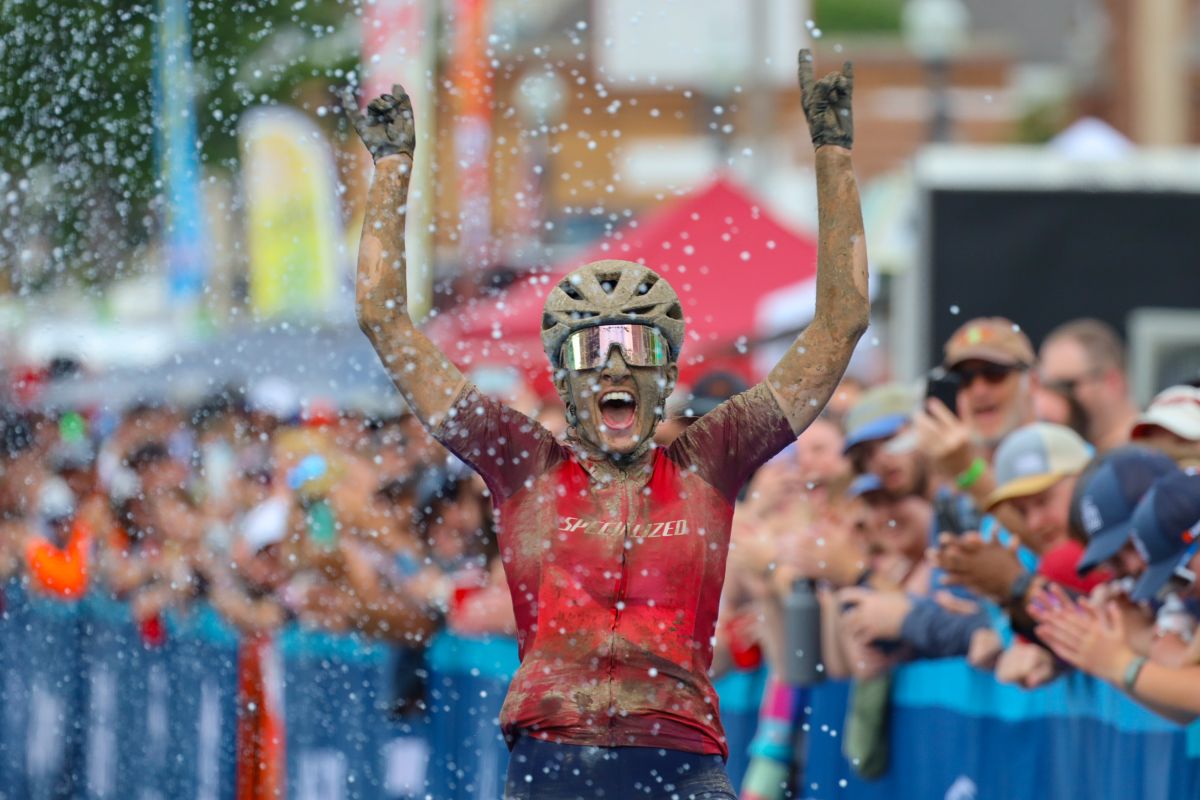 Gomez’s winning time of 10:27:41 on a new southern route across the Flint Hills of Kansas was an hour and 33 minutes quicker than the 2021 winning time posted by De Crescenzo. After crossing the finish, she had time to walk backwards on the finish chute, covered in mud, to high-five fans in downtown Emporia, Kansas.

Gomez, who won the eight-day Cape Epic with teammate Haley Batten, used a smooth and super-quick 30-second transition at the first checkpoint 77 miles into the 200-mile event to take the lead in the women’s division for good.

“I was here to definitely prove a point. I wanted to show that mountain bikers can go fast and go long,” Gomez said at the finish line. “I was going to be stoked to just to win a Life Time Grand Prix race, but to come out with the overall… it’s a true testament to the hard work I have put in.”

With the win Gomez is expected to take over the women’s lead in the  Life Time Grand Prix series, as she placed second  in the opening round at Sea Otter Classic in the Fuego XC 80K. The early lead had been held by Fuego winner Moriah Wilson, who was killed in a shooting three weeks ago in Austin, Texas, her murder still under investigation.

“I honestly barely rode any gravel in this off season. I have been training on TT bars on the road and never trained over five hours, so to put it together was really special. When you have your coach telling you that you are absolutely ready, you’ve done everything you can, [it helps]. I just have such a good team around me. So many people have been encouraging. I think this proved quite a lot. It was a good day and I’m definitely glad we were under 11 hours,” Gomez said after completing her inaugural Unbound Gravel for the victory.

The mass start for all 200-mile riders began in downtown Emporia, Kansas and after a section of pavement began the trudge on a course oaked from heavy rainss earlier in the week, prompting organisers to modify the far southern section to eliminate a few miles of impassable roads due to flooding.

After 20 miles of racing, mountain bike specialists Lea Davison and Kaysee Armstrong rode together with a 30-second advantage over Gomez. Chasing just 10 seconds behind Gomez was Heather Jackson, then Sarah Sturm and Heidi Franz another nine seconds back. Lauren Stephens was among a small group of riders with Emily Newsom, Whitney Allison and Amber Neben to round out the top 10, 1:30 behind the leading duo.

At the first of two checkpoints on the 200-mile route at Eureka, at mile 77.3, Gomez rode at the front of the women’s field by several minutes. Jackson had moved into second place ahead of De Crescenzo in third, with Sarah Max, Whitney Allison, Katie Kantzes and Neben in close proximity. Heavy rains came down mid-way through the race.

On. the backside of Teeter Hill, with about 70 miles to go, Gomez continued in lead with two male riders, Jacob Rathe and Theo Gilbertson, for company, as the rain stopped on the course. By the time Gomez reach checkpoint two in Madison, with 35 miles to go, she had more than four minutes on second-placed De Crescenzo. She was riding solo on the muddy roads at this point, with more than seven hours in the saddle.

The Argentinian was off her bike and walking in the heavy mud on one of the long climbs between prairie fields of grass with 30 miles to go. She remounted for the tricky descent, falling off the bike twice in the water and mud on the rugged surface. Despite the miscues, she was able to extend her margin over second-placed De Crescenzo by 10 minutes. Behind, Newsom made a move to ride into third place