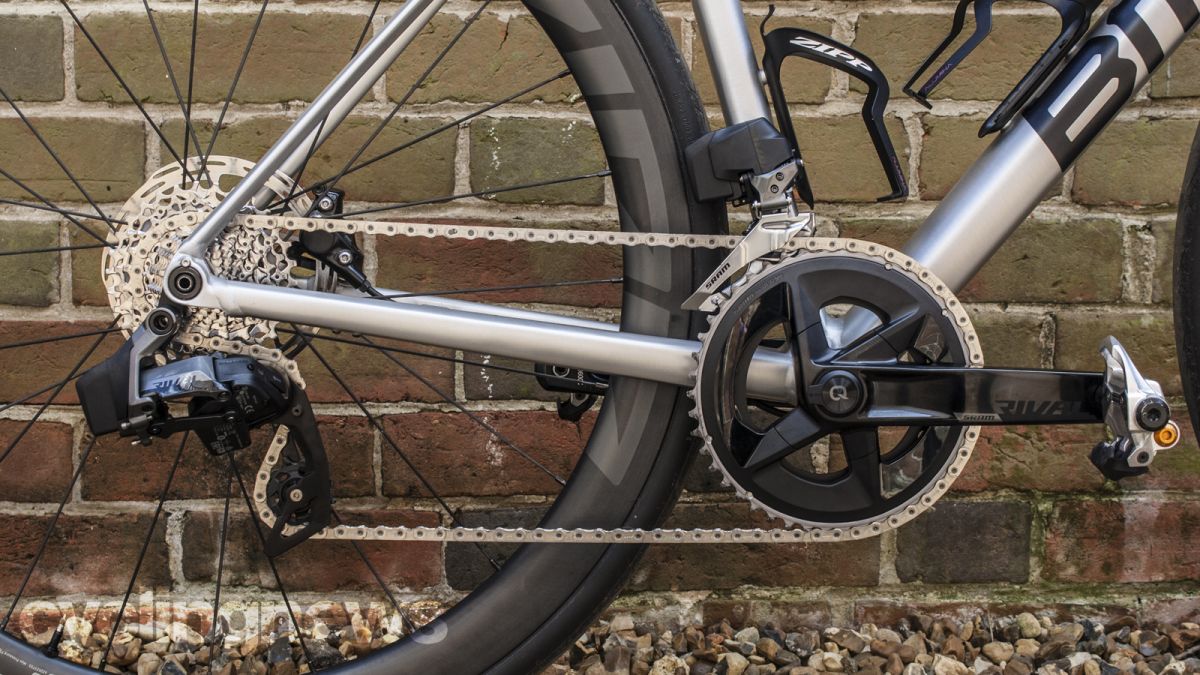 We first learnt of SRAM’s wireless intentions for its third-tier road groupset after our senior tech writer, Josh Croxton, uncovered two approved applications pertaining to the Rival moniker on the US Federal Communications Commission (FCC) site earlier this year.

It’s now official as the American firm today confirmed Rival will indeed be joining Red and Force in its wireless AXS portfolio. While Rival has long been associated with gravel riding, SRAM believes the groupset will double up for use across myriad disciplines, road included, utilising full wireless technology and hydraulic disc actuation. There is no mechanical option.

The Rival eTap AXS is naturally built around the same blueprint as its pricer AXS siblings but utilises heavier materials to cut costs. It gets SRAM’s proprietary flat-top chain and 12-speed X-range cassette, a spring-actuated clutch rear derailleur and a virtually identical braking system, all the while retaining the same aesthetic and AXS cross-compatibility. It also benefits from a nifty DUB-spindle-specific power meter but loses out on contact-point adjustment and blip ports.

The big talking point here for SRAM lies in the notion of quality control and maintaining the same level of refinement as seen across its entire AXS range (eTap and Eagle). The company has gone out on a limb highlighting the fact that riders won’t be able to tell the difference in terms of performance across Red, Force and Rival. A bold claim indeed – but the groupset goes over and above that of its performance credentials with a very premium look and feel, having applied the same rhetoric to the appearance.

The hoods take on a slightly smaller shape than the Red/Force equivalent but retain the same level of visual clout – the only difference being the paucity of silver foiling on the shift/brake levers. Instead, Rival is stealthier-looking with gun-metal accents. The hoods and levers are more textural in appearance to help with ergonomics and hand traction during off-road riding.

If you build it, they will come

The new Rival eTap AXS groupset represents trickle-down technology at its finest and we’ve seen SRAM do this over and over, more recently with its mountain bike drivetrains – GX Eagle AXS is a case in point. With Rival, SRAM has taken all the fundamental tenets of eTap AXS philosophy and repackaged it to be more affordable to the masses. That means it has eschewed all the glittery carbon fibre and minimal aluminium bits and pieces in favour of [marginally] heavier steel, [more] aluminium and, you guessed it – plastic. The result is nothing less effective. If anything it operates as precisely and efficiently as its pricier siblings with the only evidence hinting at its budget nature coming in the form of a somewhat noisier rear derailleur assembly.

So what exactly does it lose out on? Well, while reach adjustment remains unchanged, there’s no contact-point adjustment nor are there any blip ports (Red has two sets, Force has one set). Surprisingly, the rear derailleur makes do with a spring-actuated clutch system instead of the company’s Orbit hydraulic pulley clutch we expected, but that’s not a dealbreaker given the standard system’s reliable performance. The braking system is practically identical – the calipers utilise the same design blueprint but use a different bleed port – forgoing SRAM’s Bleeding Edge tech – and slightly heavier materials, which brings me onto weight.

Considering SRAM’s second-tier Force eTap AXS groupset weighs 430g more than the Red equivalent, the thought of how its Rival eTap AXS groupset stacks up on the scale will be concerning to some, especially the weight weenies – but the company has done well to keep weight gain to a minimum. There’s a 230g weight difference between Force and Rival meaning a complete Rival eTap AXS groupset will tip the scales at 3,200g (2x) or 2,800g (1x). As mentioned the extra lard comes from the liberal use of aluminium – particularly in the crankset and arms but this is unlikely to curtail its popularity owing to the cross-compatibility of the setup.

As is the case with the AXS family, parts can be used interchangeably. We’ve already experienced this with the Specialized S-Works Diverge we tested last year, which used an AXS mullet arrangement combining an eTap AXS road levers with an Eagle AXS rear derailleur and 10-50T cassette.

In terms of specifications, there are three double chainring crankset options available – 48/35T and 46/33T as well as a wide chainline 43/30T option, each of which conforms to the DUB bottom bracket standard. There are also five ‘Wide’ direct-mount single-ring crankset options ranging from 38-46T. That said the front mech – available in both standard and wide configurations – can accommodate a 50T ring but SRAM feels the Rival system is better suited to a maximum chainring size of 48. While the rear mech works with both 1x and 2x setups and can accommodate cassettes ranging from 10-28T to 10-36T, it will be available with only two cassette options from launch, a 10-30T and 10-36T. The 12-speed cassettes feature X-range gearing, nickel-chrome plating and have been designed to work with an XDR driver body.

All popular crank lengths standards have been catered for, which includes 160, 165, 170, 172.5, 175mm. The chain features SRAM’s proprietary flat-top interface which has proven to reduce drivetrain noise and weight while boosting strength and performance – it can be used across both 2x and 1x eTap AXS setups.

Power to the people

To sweeten the deal there’s also the option of a specially designed and neatly packaged power meter. SRAM had to look at other ways to bring this to fruition as using the spider-based Quarq power meter from Red/Force was not possible given Rival’s one-piece aluminium crank/spider arrangement.

The solution? An entirely new power meter platform housed within the DUB spindle. Not only does this provide a cleaner aesthetic, but it’s also almost impossible to spot save for the discreet Quarq logo and LED light on the non-drive side. This particular setup is IPX7-rated, weighs just 40g and uses an AAA battery rather than coin cell or rechargeable systems – the battery is good for 400-hours. The power meter requires a manual zero offset before each ride and measures left side power to calculate the total watts.

A power upgrade kit (£230) is available for those who already have Rival Etap AXS.

As a whole, AXS has been a popular groupset for bike manufacturers to bolt to their wares and SRAM confirms this will continue with Rival eTap AXS. This is down to the cross-compatibility of the AXS line but also the brand cachet – add to that the lenient gear ratios and drivetrain options available and Rival eTap AXS makes a compelling case as the go-to groupset in the drop-bar market (gravel and road).

At face value, the SRAM Rival eTap AXS groupset makes a serious case for itself. It’s on point as far as aesthetic refinement goes but also overall performance. While our time with the new groupset has been limited owing to the UK’s unpredictable weather what we’ve sampled to date has been mighty impressive – the shifting is precise and smooth, the brakes powerful and modular and the entire groupset feels as holistic in operation as its pricier siblings, Red eTap AXS and Eagle eTap AXS included. Yes, it’s a whole lot heavier than its stablemates and rivals from Japan but that shouldn’t be the basis upon which you judge it – it’s affordable, beautifully packaged and will undoubtedly provide the same reliability as the current AXS family.

We’ll be spending more time testing it in depth over the coming weeks and months and will report back on how it performs across the board.

SOURCE: CyclingNews   (go to source)
AUTHOR: Aaron Borrill
All copyrights for this article, including images, are reserved to the original source and/or creator(s).