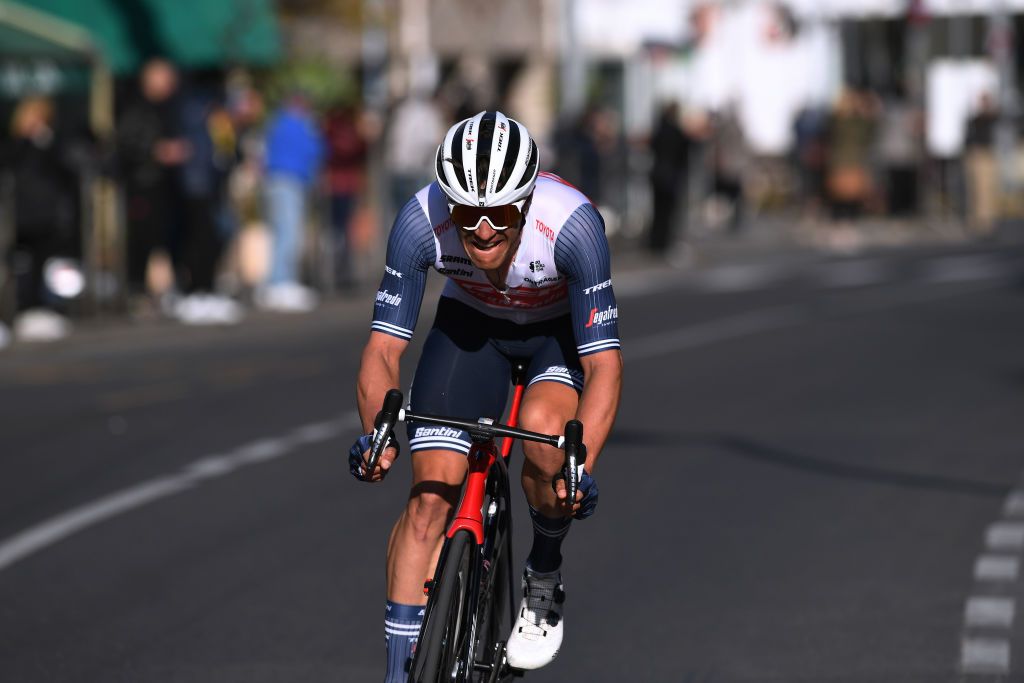 Like several other teams lining up at Paris-Roubaix on Sunday, Trek-Segafredo will line up with more than one leader for the cobbled Monument. Former world champion Mads Pedersen and Milan-San Remo champion Jasper Stuyven lead the American team at what is expected to be the first wet edition of the race since 2002.

On Friday, the pair gave a pre-race press conference where they discussed the hottest topic of conversation of the week – the weather forecast and the potential for pitfalls during the race.

Stuyven, who last week took fourth place in the Worlds road race in his home town of Leuven and has twice finished in the top five in Roubaix, said that he felt that the conditions could still be safe enough to race on, despite the likelihood of rain on Sunday, and despite one rider – Alpecin-Fenix’s Oscar Riesebeek – falling and fracturing his pelvis during a recon ride.

“Of course, it will be more dangerous, but the group will be a lot smaller because it’s so fast,” Stuyven said. “I think the first part of the race will be crucial and then after, of course we’ll see some more mechanicals and crashes.

“But in my opinion, I have a feeling it will still be safe enough to race. With the tailwind and the stress of the day with the weather, I think we’ll see a long and hard race.”

Pedersen added that the race is always a dangerous one, rain or not, saying that some riders who have said they’re not looking forward to racing Roubaix in the bad weather just don’t like the rain.

“Safety reasons, come on,” he said. “We have also seen the cobbles with mud on before and it’s not an easy race. Of course, it’s dangerous, you know. It’s not normal to race your bikes on cobbles like this so it will always be dangerous. It’s how it is. We’re getting paid to do this.

“Some guys aren’t looking forward to it because they don’t like the rain. I don’t see it as more dangerous than other years. We just have to take into account that there will be some mud and that the stones can be wet.”

Stuyven, who said that Paris-Roubaix was his favourite race despite being a Flandrian, was enthusiastic about the strength of Trek-Segafredo’s team for the race, which also includes Edward Theuns, debutant Quinn Simmons, Toms Skujins, and the retiring Kiel Reijnen.

The 29-year-old said that he hopes to be able to race alongside co-leader Pedersen in the final, with the Dane yet to score a top 50 result in three appearances at the Hell of the North.

“I think we have a good dynamic going on in the team and a good atmosphere,” said Stuyven. “So, I think we’ll be a nice team to line up for Roubaix. I think all of us showed already that maybe this is a race that fits them the best and then of course, it will always be nice to race with Mads in the final.

“It would be great if we’re both there without having to spend too much energy. We have the guys to bring us as far and as long as possible, so hopefully we all stay out of trouble.

“I like the cobbles and I think that sometimes in the other Classics you can spend a bullet in the wrong moment and then if you hit a climb, it’s hard to hang on. On these cobbles I can find my way easier or hold my way up there. It’s nothing specific.

“If I could pick one race, I would pick Roubaix, but I also really like the other Flemish Classics. I always give my all and sometimes it happens to turn out better in Roubaix than the other ones.”

As well as looking forward to the weekend, the pair also looked back on the events of last weekend in Leuven, where Pedersen fell victim to a crash while Stuyven missed out on bronze by a tiny margin in the final sprint.

Pedersen, who since raced to third in Wednesday’s Eurométropole, said that he feels in fine condition following his fall, but noted that he had mixed feelings about the outcome of the race as one friend and teammate – Stuyven – missed the medals, while another – Danish teammate Michael Valgren – took third place.

“We celebrated a bronze medal in Denmark. Of course, it’s different for me because I’m sitting here with one of my good friends and I know how much he wanted a medal,” Pedersen said. “But he also knows, after watching the race, that he couldn’t have done a lot more and we are talking about centimetres in the end.

“I texted Jasper straight away and told him that he could be proud of the race he did because I knew he would be pissed if I said congratulations because of course, he’s not happy with fourth and it wasn’t what he was coming for.

“On the other hand, on Sunday I was celebrating a bronze medal with another one of my good friends, so that’s racing, and I think Jasper can agree on that.”

Stuyven, meanwhile, reflected on the fall-out from the Belgian performance at the race, which saw team leader Wout van Aert finish 11th and teammate Remco Evenepoel later saying that he had the form to go for the win himself.

“I think that I’ve seen a lot of articles about how we should race before the race, and then how it should have gone,” Stuyven said. “I think it was exactly how we wanted to race and we did that and now, all of a sudden, we were so stupid and such big idiots.

“If you don’t win it’s hard to give critics and I think that’s exactly what’s happening. Like I said before, if we don’t win then [the press] are going to make like we’ve failed. I’m still really proud of how we raced and left everything out there. Everyone was really going for it. For me, it’s quite annoying to see how it has gone this way.”