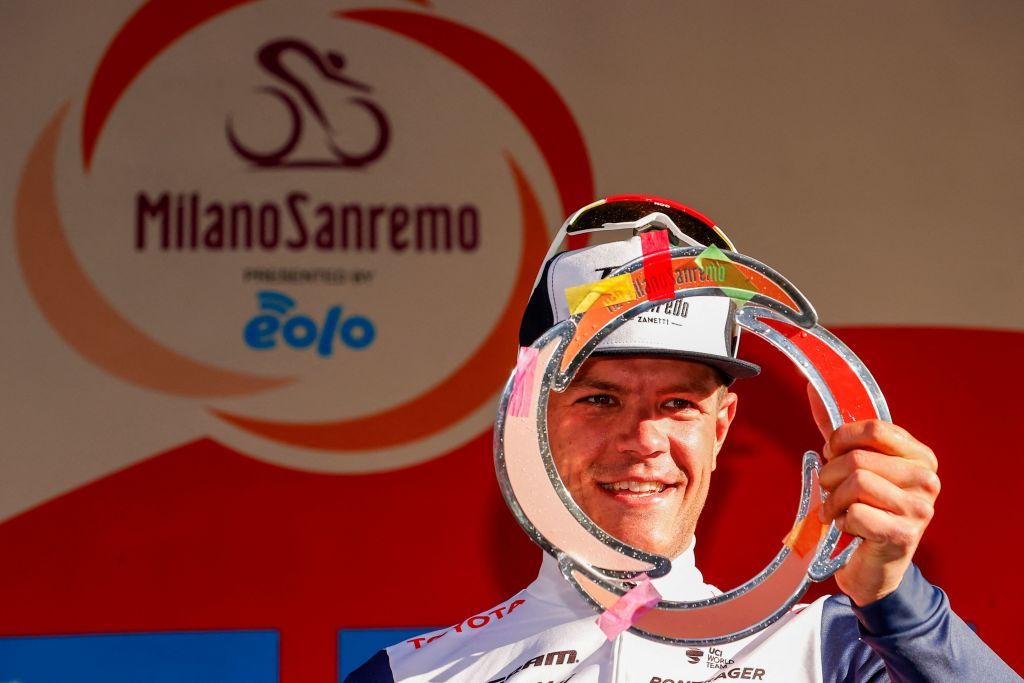 After winning Milan-San Remo and taking a career-best fourth-place finished at the Tour of Flanders and his hometown World Championships, Jasper Stuyven has said that he can head into the 2022 season with a more relaxed attitude and added confidence.

The Belgian said at the start of 2021 that every year he is asked when he will finally get his ‘first big win’, despite having the likes of Omloop Het Nieuwsblad, Kuurne-Brussel-Kuurne, and a stage of the Vuelta a España on his palmarès.

In a press conference at Trek-Segafredo’s end-of-year training camp, that line of questioning was now obviously absent after a season which saw him take his first Monument on the Ligurian coast after a last-gasp attack saw him hold off the sprinters.

Stuyven said that his San Remo win will allow him to approach the new season with less pressure on his shoulders, something that could turn to his benefit in the spring Classics, which are now just a handful of months away.

“Maybe I’ll be a bit more relaxed but at the same time also motivated to try and keep on winning some of the nice races there in the spring to start with,” Stuyven said. “Of course, winning a Monument this year gives a bit of a more relaxed approach. Maybe because of that I can have more confidence going into the race but it’s a nice starting position.”

Stuyven, who has been with Trek-Segafredo since turning pro back in 2014, said that he felt 2021 was the best season of his career so far, with the big results playing the major part, but also the way he was racing throughout the year. Fourth at the Worlds in his hometown of Leuven still stings, but he said that he’ll remember the race as among the best days of his life.

“I would think that, yes, it’s the best year of my career so far,” he said. “I think it showed not necessarily in the results but also in the way I could race and how I felt I was experiencing the races. Not looking at the result but of course the best results are coming with that in some races.

“For me personally I looked back to [the Worlds] as one of the best days in my life because I was just racing in my hometown. There was so many friends and family on the road I had goosebumps a lot of times during the race. I prefer to remember the positive vibes and amazing experience that I probably will never have again.”

Now 29, Stuyven looks to be in his peak years as a racer, with his results on the road bearing that out. He didn’t disagree, noting that he had hoped to reach his best between a certain age, and adding that he feels he has shown that it’s possible to get the better of the Classics’ ‘big three’ of Mathieu van der Poel, Julian Alaphilippe, and Wout van Aert.

“It’s nice to see what I have always, planned is maybe not the right way of saying, but I always said that I was looking to be at my best between 27, 28 to 33, 34. So far that’s going OK but that doesn’t mean that I’m satisfied or that I want to stop here.

“Until today [San Remo] is the biggest win in my career. It’s a special moment and achievement in my career. Everyone was expecting one of the big three because everyone was talking about them. For myself and for other riders it proved that there are lots of chances left and that it’s not like a Playstation [game],” he said.

“In general, I just don’t think anyone is unbeatable. It has been a long time since we had Tom [Boonen] or Fabian [Cancellara] winning four of the five Classics. Even if a great favourite is there, it doesn’t mean he’s going to win. At Flanders we saw Mathieu and [Kasper] Asgreen and everyone thought it was an easy one for Mathieu, but it just didn’t happen. It’s such a hard race – it’s not about who is the fastest but who is the strongest at the end of the day. I just like to think that I focus on myself, on my training, and for me it has been successful that way.

“Will I become a rider that wins like Wout or Mathieu? No, but I’m a rider building on my palmarès, and I think I have some nice victories on there, and that’s the way I want to try to keep going. Even if some riders have done some very impressive things it doesn’t mean they can drop me in an easy way.”

While San Remo was the major triumph for Stuyven and the team during the spring, his co-leader Mads Pedersen also scored a victory at Kuurne-Brussel-Kuurne. Away from those races, a 10th place at Dwars door Vlaanderen was the team’s best result across the spring Classics – including the postponed Paris-Roubaix.

Stuyven said that he hopes he and his team can be more involved in more of the Classics in 2022.

“I think it’s not a secret that Mads and I are good friends since the beginning when he joined the team. We had a good connection from the start and it’s something that has been growing since then. It’s nice that we get along and we know that we are willing to support each other and give everything for each other, but also be there in the finals together.

“We’ll never be in a situation where we’ll be thinking ‘I can’t cover this move in case Mads is covering the next one and they go to the line’. I think we really understand each other quite well when we get to the finals and also before then. It’s a nice relationship we have and it’s nice to bring that friendship into the finals of the Classics.”

At training camp, a sizeable number of new faces are beginning their integration into Trek-Segafredo with 11 riders coming on board for the 2022 season and beyond. Vincenzo Nibali may the major outgoing name, but several on the incoming list –including Tony Gallopin, Antwan Tolhoek, Filippo Baroncini, Simon Pellaud, and Markus Hoelgaard – look like intriguing additions.

When asked about his opinion on the new signings, Stuyven picked out a couple as good fits for the Classics squad, including the Italian Baroncini, who turns pro with the team just months after becoming U23 world champion with a late solo attack in Leuven.

“I think there’s a lot of young guys and on the young guys’ side we have a few who will fit quite well for the Classics and also for the climbers’ group,” Stuyven said. “Baroncini, as the U23 world champion, who can be surprising in some of the races which will be interesting to see and I’m excited to see him with us.

“Next to that we’ll have Markus Hoelgaard [from Uno-X] who will be in my opinion the third guy with Mads and I, backing us up let’s say. He showed some really strong races this year so I’m excited to have him with us and I think he’s a rider that everyone would like to have with him on the team.

“We have Daan Hoole [from SEG Racing Academy] and Otto Vergaerde  [from Alpecin-Fenix] too. Daan did some races as a stagiaire at the end of the year, and I was really happy to see how he fitted in the team and how he was very motivated and strong. Otto has experience on the Belgian roads, and he did a very good job riding for Mathieu in the past years, so I’m happy he’s now on our side.”