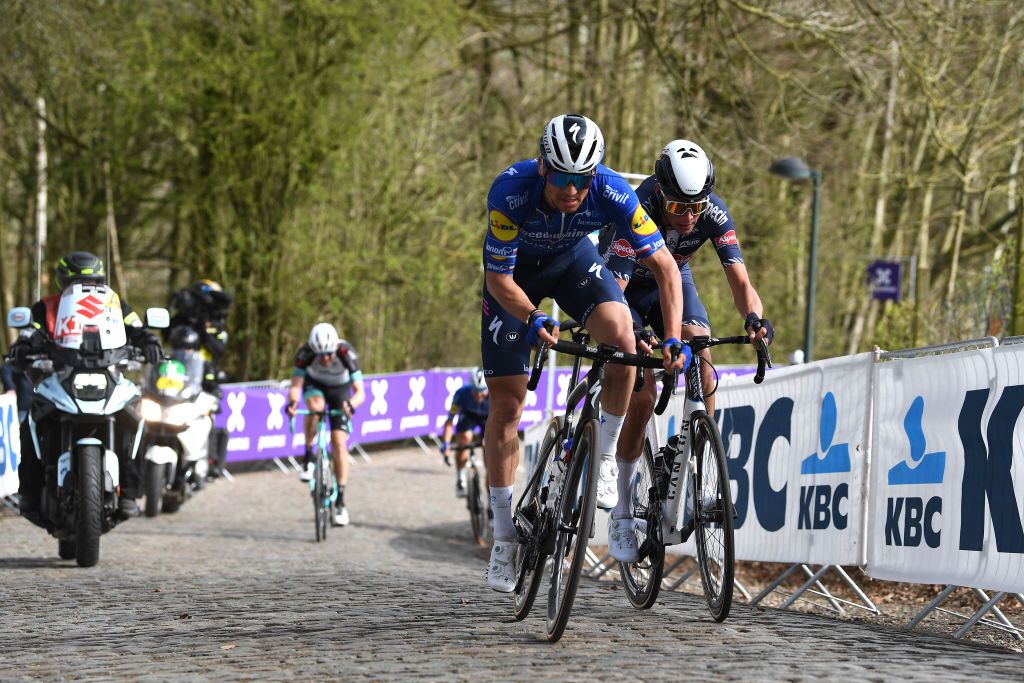 Zdenek Štybar has said that he could return to the peloton at the end of May after his recovery from surgery to fix a cardiac arrhythmia that was discovered in March.

The Deceuninck-QuickStep rider felt unwell following his appearance at Gent-Wevelgem, where he finished 25th, and hasn’t raced since after undergoing a cardiac ablation procedure in early April.

The Czech veteran has yet to resume training after the operation but says that there is no risk to returning to racing. He told Het Laatste Nieuws that the recovery could do him good, citing several goals in the second half of the season that he has his eye on.

“I would like to [train], but it has been a long time since I’ve had such a big recovery block. I can start the second part of the season well rested. I still see nice goals,” he said.

“The team meeting next week will have to clear up [my return]. Sometime at the end of May, I guess. Normally I would have continued up to and including the Gold Race and I would probably have raced Brabantse Pijl as well.

“It could have been an excellent introduction to the World Championships course. I am now trying to peak again at the Olympics, the Worlds and Paris-Roubaix.”

Štybar, who had tissue from his groin removed during the operation, is also on blood thinners, which could cause a problem if he were to crash while riding. But he’s due to come off them later this week, so there will be little ongoing risk from his surgery in future.

He told of how the arrhythmia struck during Gent-Wevelgem, with his heart rate making big jumps after being abnormally low in the final of the race. Having first wondered if the problem was due to a lack of food or his heart rate monitor, Deceuninck-QuickStep doctors quickly diagnosed his arrhythmia after the race.

“During the race the feeling was pretty good. But after the descent of the Kemmelberg in the last 20 kilometres I got a little dizzy,” Štybar said. “I had a tendency to hyperventilate. I thought, ‘What is this now?’ It just didn’t feel right.

“My heart rate was way too low in the final. And then made crazy jumps. 130, 140, 180, 200 all at once. A hunger knock? There was little chance of that, because I had eaten enough. I called the race doctor to measure my heart rate and saturation. Everything was fine. So I took it as an error message on my Wahoo. Yet I was not reassured. I really did not feel well.

“On the team bus, afterwards, things did not improve. Our medical staff responded very accurately. In the hospital in Roeselare irregularities were diagnosed, after which I was referred to heart specialist Pedro Brugada.”

The arrhythmia was not life-threatening, Štybar said, and he could even have continued racing without undergoing any procedures, but the possibility of fainting and falling during a race could have had dire consequences, so it was a case of safety first.

Nonetheless, Štybar said that he worried if a post-race training ride with Mathieu van der Poel would be the last training ride he’d ever do.

“I’ve never been confronted with heart problems before. I didn’t feel anything coming,” he said. “It is the nightmare of every top athlete and riders have already succumbed to it in recent years. So, yes I was scared.

“The Tuesday after Gent-Wevelgem, the day before my operation, I went cycling with Mathieu van der Poel. On the way home, the thought, ‘Shit, this might have been my last training ever’.”

Štybar said he constantly ran through the possibilities before heading to hospital – whether it was a misdiagnosis and he could get back to racing at the Tour of Flanders, whether he could continue after an operation, or whether it would spell the end of his career.

In the end, it was good news. Štybar should be back on the bike soon, and in the peloton by the summer. But still, there’s one regret that lingers – another case of bad luck befalling him at the Tour of Flanders.

“I really had the impression that I had my top condition. But it’s like there’s a curse on that race. The Ronde is not for me, there is always something. I lost my teeth there once. Other times I was caught up in the team’s tactics, with super legs – the year of Terpstra, the year of Gilbert.

“I was so disappointed that at first I didn’t plan to watch it. But because I still felt tired after the operation, I did it anyway. With a bleeding heart.

“The fact that Kasper [Asgreen] won eased the pain a little. But still… Hanging in your chair with a cappuccino and a coffee cake: anytime, but not during the Ronde. Nothing fun about it.”

“I consoled myself with a positive thought. That I only missed the Ronde and that it could have been much worse. The cancellation of Paris-Roubaix did help.”