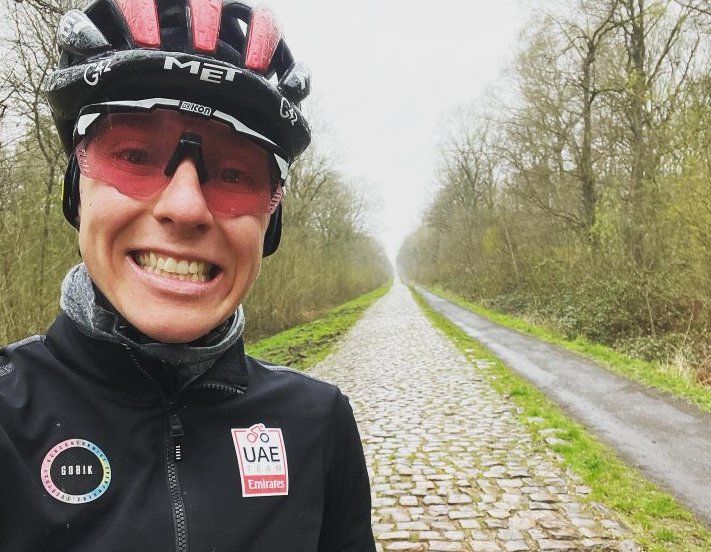 One day removed from a failed podium finish at the Tour of Flanders and Tadej Pogačar was back in the saddle to ride across another stretch of rough and tumble cobbles. The UAE Team Emirates rider was seen on sections of pavé that are part of Paris-Roubaix in two weeks, and maybe more importantly, will be part of the Tour de France.

“It is more difficult than the Tour of Flanders. It is usually flat here, which is different from yesterday,” said Pogačar after his reconnaissance ride, as reported by Sporza.

“My legs still hurt a bit from yesterday. I didn’t kick too hard during the recon.”

Following three opening days of racing and a rest day in Denmark beginning July 1, the 2022 Tour de France will land back in French soil and shake up proceedings with 19.4 kilometres of cobblestones on stage 5 from Lille to Arenberg Port du Hainaut. There will be 11 cobbled sectors on the stage, of which several have been used for Paris-Roubaix. There will be new sectors featured as the route traverses south to Cambrai, and then connects with familiar territory around Hornaing and Wallers. In fact, just sector four, the three-star Warlaing à Brillon, featured in the 2021 Paris-Roubaix.

“I look forward to the cobbled stage in the Tour,” the two-time Tour de France champion told Sporza. “It can go terribly wrong or it can go OK. You won’t win the Tour here, but you can lose the Tour.”

While he called his ride at Tour of Flanders “one of my best days on a bike”, Pogačar looked ahead to a possible appearance at Paris-Roubaix, as well as a third title at the Tour de France. His homework for another maillot jaune at the Tour is focused on both mental and physical preparations. Already this year his traditional road racing has landed him another overall victory the UAE Tour, the overall at Tirreno-Adriatico, plus a victory with a staggering 50km solo attack at Strade Bianche.

His cobbles homework continues. The Slovenian’s first appearance in a cobbled Classic as an elite rider was last Wednesday at Dwars door Vlaanderen, where he missed a decisive move on the Berg Ten Houte and settled for 10th, two minutes down on winner Mathieu van der Poel (Alpecin-Fenix).

In his second Classic as a pro three days later at the Tour of Flanders, Pogačar lit up the race with a series of accelerations on critical climbs, but this time he wasn’t quick enough to react to the decisive acceleration just a hundred metres from the finish and came fourth to Van der Poel. The two had looked destined for a one-two knockout punch at the line, but when they slowed to mark each other before the sprint, chasers Dylan van Baarle (Ineos Grenadiers) and Valentin Madouas (Groupama-FDJ) pounced in the final hundred metres to make it a four-rider contest and Pogačar never saw the front again.

“Yeah, it was more or less like I thought it would be, but it was still a bit of a shock for the body and the mind on Wednesday. You need to be in position all the time,” Pogačar had said before the Tour of Flanders.

He appeared disappointed immediately following the finish at Flanders, but later wore a smile and said, “All in all, it was a great experience. It was a really amazing race. The team was super and perfect. We lit it up in the finale, me alone with Mathieu [Van der Poel], and the atmosphere on the climbs was incredible.”