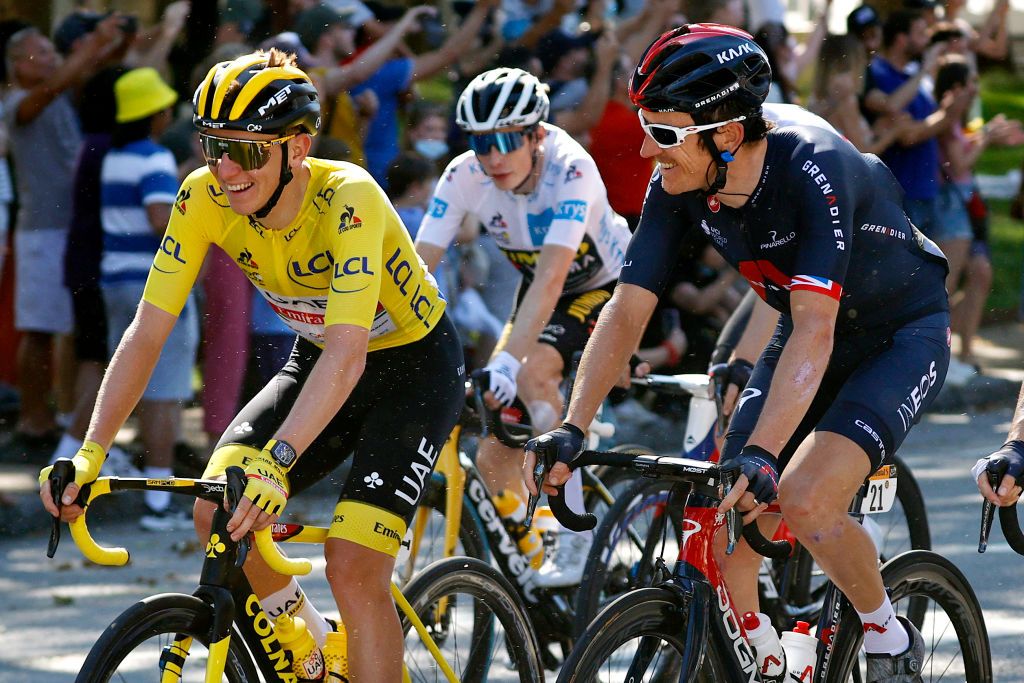 Just a few days after Jonas Vingegaard said he sees no weaknesses in Tadej Pogačar, the two-time Tour de France champion himself has revealed how his rivals can hurt him.

Pogačar, who won his second yellow jersey this year as well as two Monuments, was a guest on Geraint Thomas’ podcast this week and looked to play down the aura of invincibility he has seemingly developed.

“They shouldn’t be scared of me, for sure. That’s the first thing, because I can crack really fast, actually,” Pogačar admitted.

Speaking directly to one of his chief Grand Tour rivals, he even explained specifically how he could be beaten.

“I do a good power on the not-so-long climbs, but sometimes the longer climbs are worse for me, and the high altitude – I think that’s what they already figured out.”

Pogačar indeed lost a little ground to Primož Roglič at the 2400-metre-high Col de la Loze towards the end of his Tour de France debut in 2020, which made his table-turning victory in the penultimate-stage time trial all the more stunning.

This year the 22-year-old blew the competition away on the first mountain stage and won two more – albeit in tighter fashion – in the final week, with the only thing approaching a blip coming when Jonas Vingegaard briefly gapped him over the top of Mont Ventoux.

Pogačar’s UAE Emirates team were stronger than in 2020 and have reinforced for 2022, but he still suggested he could be isolated and that Thomas’ Ineos Grenadiers squad could use their strength in numbers against him.

“For sure, if It happens that I have a not-so-strong team, with long range attacks, that makes it for us more difficult,” he said.

“And trying to go aggressive from the long way, with multiple riders, like Ineos has a lot of leaders, so they can try a lot of things, in a different way. I think there can be a lot of things that can crack me, or anybody else. It’s not that complicated.”

Thomas himself acknowledged that the rise of Pogačar will require a re-think for him and Ineos Grenadiers.

“When you see someone as strong as that, a lot of teams are probably thinking: ‘How do we beat this guy?’ For myself and my team, you’ve got to stay positive and believe you can still win, otherwise what’s the point?” Thomas said.

“It’s certainly a challenge for the rest of us. You’ve definitely got to look at different ways of racing. There’s no point us riding like we did in the teams and just set a tempo on the front, because that’s just going work for him. it’s certainly exciting to watch, I think.”