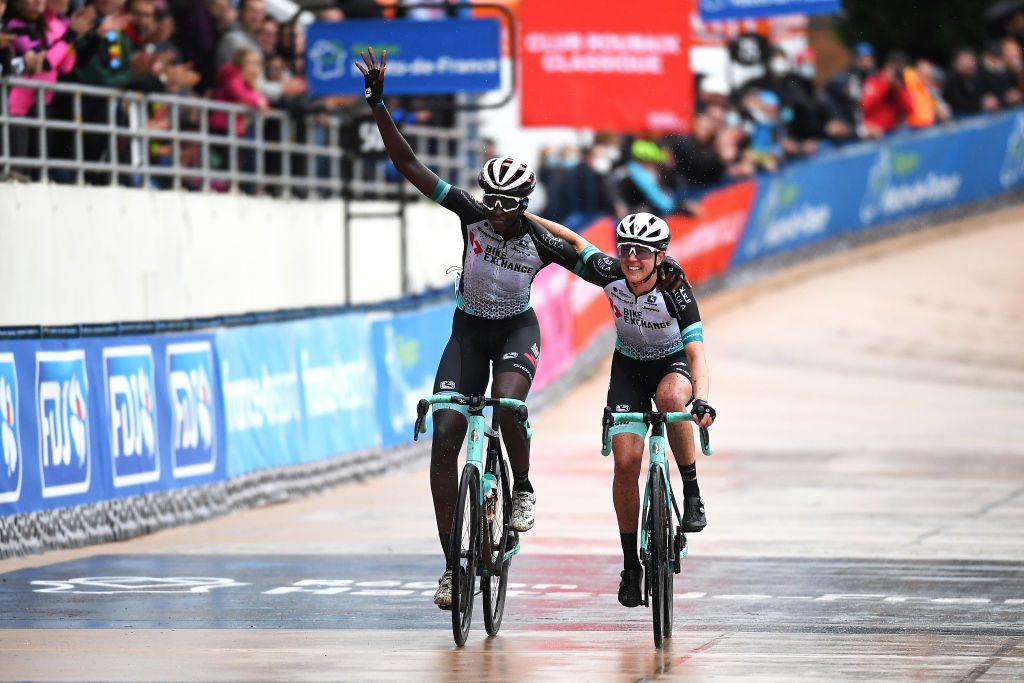 At Paris-Roubaix, as the saying goes, every rider has their own story, no matter where they finish – or don’t. It was no different at Saturday’s inaugural edition of Paris-Roubaix Femmes, where 132 women started, 61 finished, a further 44 missed the time cut and 28 didn’t finish.

Among that second group of riders, finishing 14:20 down on winner Lizzie Deignan (Trek-Segafredo) at just 15 seconds over the time cut, was Team BikeExchange’s Teniel Campbell, who crossed the finish line on the Roubaix velodrome arm-in-arm with teammate Jessica Allen.

On a day when even riders who finished in the top 10 and 20 had hit the deck or fought through technical ailments, it was no surprise that Campbell, the 69th rider home – though officially not classified – had suffered two mechanicals, including a rotated handlebar and a bike change en route to the finish. Not that it dimmed her enthusiasm for the race, though.

“I survived,” she said on the velodrome infield after the finish. “Even after my handlebar dropped, I was like ‘uuh where do I hold it?’, but yeah, I survived.

“It’s not ideal – I even had to change to my spare bike because I had a really bad mechanical in a really bad moment. Then, because I don’t know if the cars in front of us didn’t want to pull aside or didn’t know what to do, we couldn’t come back, and the peloton was right there.

“But because we were stalling behind the cars and losing speed and everything, by the time we got off the cobbles everyone was gone again so that was really disappointing.”

“But I love it. I had so much fun! I was like crossing my heart and hoping not to die so many times, but it was so bloody amazing,” she concluded, adding that she couldn’t wait to return to the race in six months’ time.

Campbell, who joined BikeExchange this season and who is the only Trinidadian in the pro peloton, said that the race was a battle for position from the very start, including the opening circuits in Denain. She got on the wrong end of that, getting stuck behind crashes and cars along the way.

The 24-year-old said she was fighting back during the race, passing fallen riders along the way but managing to avoid an accident herself. And despite the carnage and muddy, wet conditions, she’s among the certain minority who hope to race another wet Roubaix.

“In the circuit I wasn’t in good position. I was trying a lot but every time I tried to move up there was a crash,” she said. “I move up again, there was another crash. That was leading up to the first couple of sectors and you’re behind, you’re chasing, then the cars come in front of you, and you can’t come back.

“You want to pass by it’s like ‘shit, you don’t know if a car is gonna swing on you’. Then coming off the cobbles you’re fighting to come back but by the time I changed my bike, everything was just gone again. I just came in with a group, we passed multiple riders still on the ground, crashing and everything. Everyone was pretty muddy too, some of them had crashed.

“I just made it to the finish without falling off my bike so that’s a plus for me. But yeah, I can’t wait for next year and I hope it really is like this again because it was more fun like this than dry!

“I was really happy. I was relieved that I made it. I actually wanted to go up on the banking [on the velodrome] but then I was like ‘it’s pretty wet’ and I didn’t want to slip in front of everyone. I kept it up a lot of times and yeah, I’m really excited for next year.”