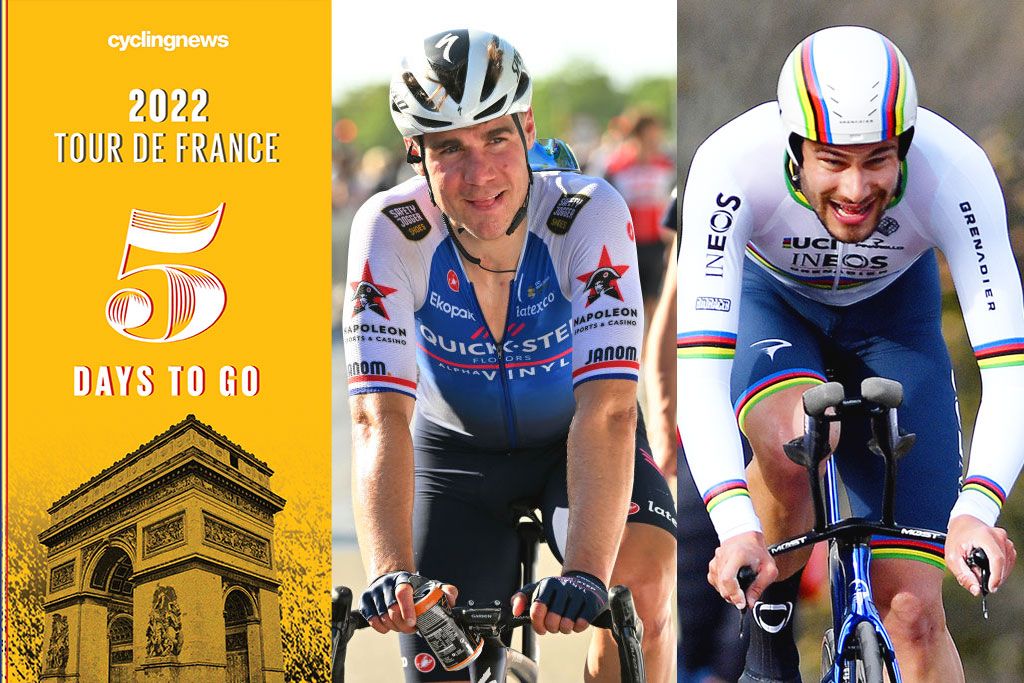 On Friday, 176 riders will roll out in the Copenhagen time trial to kick off the 2022 Tour de France.

The majority of those men will have raced the Tour before, some over 10 times like Peter Sagan, Jakob Fuglsang, Geraint Thomas, and Philippe Gilbert. But a small group of the peloton will be taking on the July Grand Tour for the first time.

Last year, 45 men made their debuts at the Tour, with second-place finisher Jonas Vingegaard among them – as well as stage winners Mathieu van der Poel and Tim Merlier.

Eight of the 22 teams have already confirmed their squads for this year’s race, and while the full start list of riders is as-yet unconfirmed, another 40 or so riders are expected to make their debuts this year.

We’ve taken a look at the confirmed and expected list of debutants at this year’s Tour and picked out some of the best.

Russian GC contender Vlasov is the biggest-name debutant on our list, though his participation is yet to be fully confirmed.

The 26-year-old joined Bora-Hansgrohe this season following two years at Astana, and he’s duly enjoyed his best opening half-season in his career so far. He’s racked up five victories so far, including overall triumphs at the Volta a la Comunitat Valenciana and Tour de Romandie.

There have been podium places at the GP Indurain, Itzulia Basque Country, and La Flèche Wallonne, too, while he was leading the Tour de Suisse before testing positive for COVID-19 five stages in.

That positive test does raise a question over his condition ahead of the Tour, but if he avoided serious illness and hits top shape then he’s a real contender for the podium in Paris.

Double world time trial champion Ganna is another rider unconfirmed for the Tour but a cert to start in Copenhagen. The 25-year-old, who recently took his third Italian TT title, is the top favourite to take the first yellow jersey of the race in the opening 13km time trial.

He’ll have stiff competition in Denmark as the likes of Van Aert, Van der Poel, Pogačar, Roglič, Küng, Asgreen, and more line up against him. However, Ganna’s time trial pedigree remains second to none and it would be an upset if he doesn’t add yellow to the pink jerseys he’s picked up on the opening day of the last two editions of the Giro d’Italia.

The Italian title was his fifth TT win of the season, with the short stage 2 at the UAE Tour his only loss in the discipline so far in 2022, so he is the favourite on Friday.

After that opener he’ll be expected to play a team role for Ineos’ GC men Dani Martínez, Adam Yates, and Geraint Thomas. The 40km time trial on the penultimate stage of the race will be waiting for him, though.

The 25-year-old has five Vuelta a España stage victories on his palmarès, including three and the points jersey last autumn as he completed a comeback of his own from serious injuries sustained in that infamous crash at the 2020 Tour de Pologne.

He’s now set to test himself at the biggest race of the year for the first time, and with the top lead-out train in the peloton aiding him, too. Tim Declercq, Julian Alaphilippe, Kasper Asgreen, and Michael Mørkøv formed the near-unstoppable train last year and should all be back this time around.

With half a dozen sprint stages on the menu at this year’s Tour, it would frankly be a huge shock if Jakobsen – who has racked up a peloton-leading 10 wins in 2022, including at Paris-Nice and Kuurne-Brussel-Kuurne – doesn’t add to his palmarès this July.

Pidock is our second Ineos rider on the list, though once again his spot is yet to be confirmed. He left the recent Tour de Suisse with a COVID-19 positive, but has since recovered and tested negative, declaring it “game on” in a social media post last Wednesday.

The 22-year-old has been a firm fixture on the Ineos longlist for the Tour since reshuffling his Grand Tour plans to skip the Giro d’Italia following an at-times testing Classics campaign.

Now, the multi-disciplinarian is set to make his Tour bow, and, while he won’t be a team leader, he’s certainly one to watch this July. Last year he made his Grand Tour debut at the Vuelta a España and was in the mix for a breakaway victory on the stage 14 summit finish at Pico Villuercas.

This time around he’ll be set to work for Thomas, Yates, and Martínez in the high mountains, but he should have his own opportunities, too. Fourth and fifth places in the hilly sprint stages in Switzerland show he’s in form and he could be in the mix on similar stages at the Tour, too.

This July, Movistar will be focussing their race on GC candidate Enric Mas and American talent Jorgenson could be a key cog in the Spaniard’s bid for a first Tour podium.

At 190cm in height, the 22-year-old Californian may loom over Mas and the other top climbers in the race, but he has shown himself in the mountains several times in the past couple of seasons since turning pro with the Spanish team in 2020.

Last season he took a top 10 at Paris-Nice before completing the Giro d’Italia, while this season he was in the podium fight at the Tour de la Provence and recently finished seventh at the mountainous Classic Alpes-Maritimes before taking 13th overall at the Critérium du Dauphiné.

Jorgenson isn’t likely to be taking on a starring role at this year’s Tour, but he should be an important rider for his team leader Mas when the race heads uphill.

Norwegian climber Leknessund is the first of just two riders on our list who have already been announced as riding the Tour. He’ll make up a youthful squad featuring five debutants at Team DSM.

Romain Bardet might be the leader of the squad this July, but 23-year-old Leknessund looks set to be second in command in the mountains at the race. He’s one of the biggest talents on the Dutch team and the former Course de la Paix winner underlined his good form at the recent Tour de Suisse.

In Switzerland, Leknessund scored his first career WorldTour victory, soloing to the win on a hilly stage 2 in Aesch before going on to finish 13th overall. He may be one for the future rather than making a big impact straight away at this year’s Tour, but he’s still one to watch.

This time last year, Storer was still awaiting the breakout results that would put him on the map in July and August. The Australian stormed to Tour de l’Ain victory in late July before going on to take two breakaway victories at the Vuelta a España and claiming the mountains jersey in Madrid.

He made the switch from DSM to Groupama-FDJ this year and the 25-year-old has so far impressed in spurts. He finished second at the Tour of the Alps and then third at the Mont Ventoux Dénivelé Challenge earlier this month.

He’s in good form then, though likely won’t be as free to fight for his own results at the Tour as he was at last year’s Vuelta. Groupama-FDJ line up with David Gaudu and Thibaut Pinot leading the way in the battle for the GC and stage victories (or even the polka dot jersey in the case of comeback man Pinot).

Valentin Madouas and Stefan Küng will also be seeking opportunities, and so those for Storer could be somewhat limited. With no stage wins at the Tour since 2019, though, the team would surely welcome success from whichever one of their riders can deliver.

The cobbled stage 5 could be on the radar for Florian Vermeersch (Lotto Soudal), who took second on his debut at last year’s Paris-Roubaix. Fellow Classics man Quinten Hermans (Intermarché-Wanty-Gobert) has enjoyed the season of his career so far.

Giro d’Italia stage winner Alberto Dainese (Team DSM) will be looking to test himself against the best fastmen in the world this July. Mikkel Honoré (QuickStep-AlphaVinyl) could form part of the most fearsome lead-out train in the peloton, meanwhile.

Victor Lafay (Cofidis) and Geoffrey Bouchard (AG2R Citroën) both enjoyed success at last year’s Giro and will be hoping to prove themselves further at their home Grand Tour. Their countryman, time triallist Benjamin Thomas (Cofidis), will be an outsider for yellow in Copenhagen.