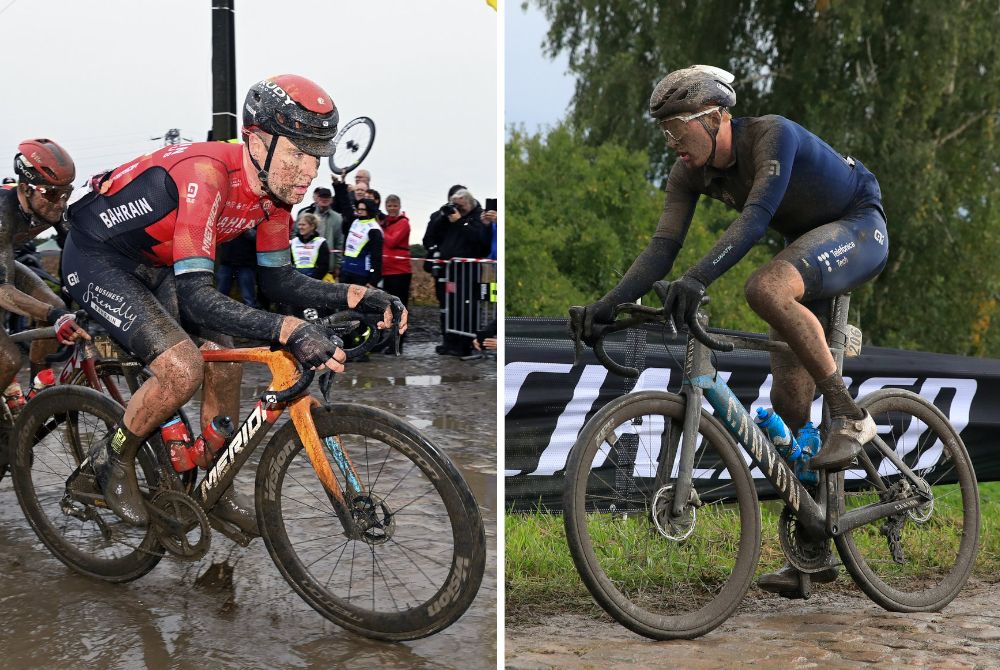 The 2021 Paris-Roubaix was an edition for the debutants, with first-timer Sonny Colbrelli joined on the podium in the Roubaix velodrome by fellow newcomers Florian Vermeersch and Mathieu van der Poel.

They weren’t alone in experiencing ‘The Hell of the North’ for the first time, in all its wet and muddy glory, with 57 other riders making their bow at the race, from 20-year-old Quinn Simmons to former world champion Michał Kwiatkowski.

Two of the men among that number were Fred Wright, Colbrelli’s teammate at Bahrain Victorious, and Matteo Jorgenson of Movistar. The 22-year-olds were active in the early stages of the race before being treated to the full Roubaix experience en route to the finish.

For Londoner Wright and Californian Jorgenson, their races began early on as the pair made the 25-man breakaway that formed with 210 kilometres still to run, some 50 kilometres before the first cobbled sector of the day. Wright lasted up there until the 10th sector of the day at Wallers before his race took a turn for the worse.

“I had the best legs I’ve had all year really. I got in that breakaway, bridged across to it when it was sort of a bit of a crosswind and straight away it was like ‘right, we’ve got two minutes on the bunch coming over these first sectors; we’ve got a good chance of doing well here’.

“But I just had super bad luck. I punctured my rear wheel the sector before Arenberg. Got that changed, managed to get to the group with Wout van Aert and Sonny, so I helped Sonny a little bit into Arenberg, and then I double punctured on Arenberg and crashed.

“So, I had to change bikes and that was the race done for me. In the space of about 15 minutes my day went from great to really bad. I’m fucked. That was the coolest thing ever. Just to be in the front of the race over some of the early sectors – oh, I’ve not done anything like it.”

Wright, then, endured all the problems that many riders experience at a Paris-Roubaix, let alone a wet edition, including a broken radio in the final 20 kilometres, meaning he had no idea who had won until he saw his happy teammates in the velodrome. He was, at least, overjoyed at the finish, and ready to celebrate, too.

“I can’t wait to get absolutely destroyed tonight. It’s going to be great. We’re going to be partying,” he said.

Jorgensen, meanwhile, avoided the carnage, managing to stay upright even if his radio stopped working after one kilometre.

The second-year pro was in the breakaway before dropping back in the final 100 kilometres, eventually losing contact with the front of the race altogether. He wasn’t held up by crashes or punctures, though.

“I got in the early break, and I started to realise that behind it must be carnage. I just kept riding, riding, riding,” he said. “I only had gels in the first four hours and eventually my stomach got super, super bad and I had to pull over for a… nature break, a number two – two times. I’ve never done that in a race, and I hope to never do that again.

“I was in the group, and I had to pull over mid-sector. I would’ve had to go in my shorts or whatever, so I just stopped. That’s how I got out of the breakaway – because I pulled over in the bushes. I just kept riding and riding and eventually I was just alone out there. I did the last 40km completely alone, just going as hard as I could. It’s the last race of the season, so why not.

“My stomach was just completely fucked. I’m just super happy to finish; I had no expectation of doing anything or even finishing.”

Jorgenson ended up rolling home in 63rd place, 16:25 down, while Wright finished in 49th at 12:24. Both men had different reasons for making the breakaway, with Wright following Bahrain’s tactical plan for the day, while Jorgenson was simply there for reasons of self-preservation, he said.

“I mean, when you start and it’s raining from the start and you know it’s going rain the whole day, we saw with the ladies yesterday that it was barely wet on some of the sectors and it was complete carnage, so put 200 guys down a sector and there’s going to be complete carnage.

“So, I told myself I’d either get in the break or, if I’m in the peloton, I’d pull out before the first sector because I really didn’t want to start my off-season with a broken collarbone or something. I actually sprinted like 50 minutes in – I just started sprinting, sprinting, sprinting and looked back and there were like 20 guys and a big split. We just started riding and somehow, I was in the early break. From there, I was just riding as hard as I could for the rest of the day.”

Wright described his team’s winning plan of action as “fluid”, noting that to put everyone at the service of one rider would be risking doing a whole lot of work for nothing if disaster struck.

“To be honest, we all kind of had the same job apart from Jonny [Milan] at the start getting us into those early sectors,” he said. “Then really for all of us it was just helping each other, covering moves.

“We didn’t want to go into the race with one captain because then it’d take guys out of the back when he gets out of the back and all that sort of stuff. It was a bit more of a fluid kind of plan. We were in the moves when we needed to be. It was perfect.

“I was nervous watching the women’s race yesterday. Some of those sectors, man. Sometimes the muddiest ones weren’t the worst. The one before Carrefour de l’Arbre at the end, I was slipping and sliding and there were cars in the way.

“Aw mate, it’s like, if you slip a couple of times, you start getting more stressed and you’re more likely to slip again. What a race. Best race in the world.”