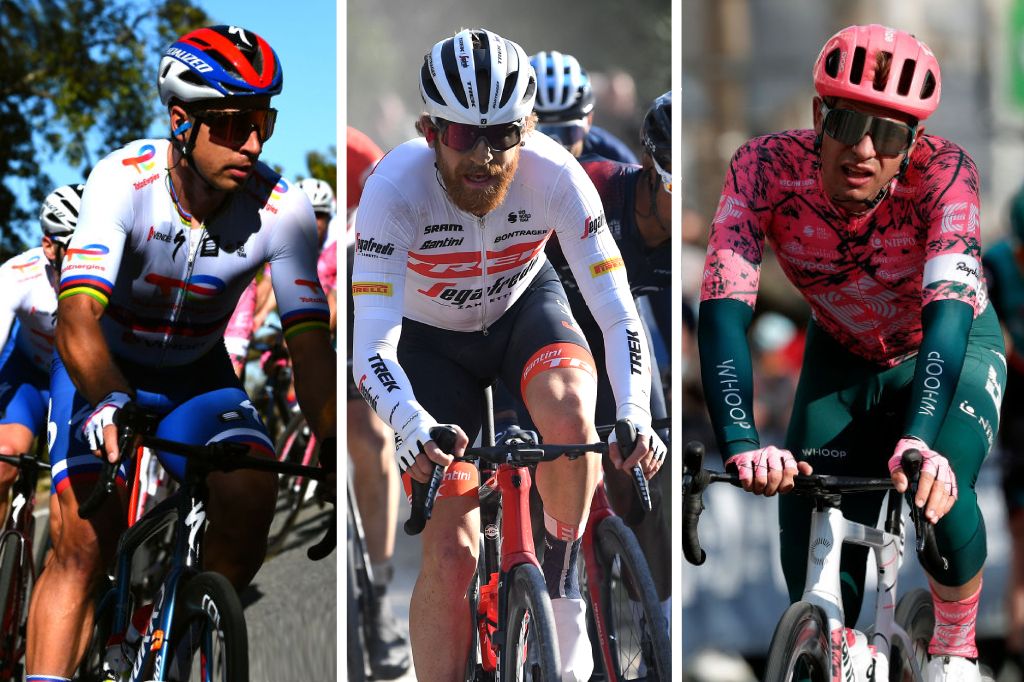 Sunday’s Tour of Flanders will bring the cream of the crop of the cobbled Classics specialists together as top riders from the spring Classics come together to do battle over 272km of hard racing (158km for the women) on the cobbles and hills of Flanders.

But not every Classics star will be lining up for the race towards Oudenaarde on Sunday morning. Illness and injury have seen several contenders and key riders put out of action ahead of De Ronde.

Thursday saw Jumbo-Visma announce that Omloop Het Nieuwsblad and E3 Saxo Bank Classic winner Wout van Aert was “unlikely” to start the race after missing the team’s recon ride. The Belgian’s absence is yet to be confirmed, however.

Here, we’ll take a look at the major names who will be missing out on the action this weekend.

After five years at Bora-Hansgrohe, the 2016 winner has turned over a new leaf with his new French squad, but he has endured a mixed start to the season, to say the least.

A sprint fourth place at Tirreno-Adriatico and fifth at Milano-Torino have done little to counteract what has been a poor spring campaign for the Slovakian. Last week he finished 68th at E3 and was a DNF at Gent-Wevelgem, and on Monday he took the decision to miss Flanders.

Instead of racing the Monument he won in 2016, Sagan will take time out to undergo blood tests and a fitness check-up in order to get to the bottom of his poor form so far in 2022. He and his TotalEnergies team will hope for some clarification on his condition, whether it’s down to catching COVID-19 in January, stomach problem at Tirreno-Adriatico, or a lack of pre-season training.

Following a limited early season campaign which saw him win the Clásica Jaén Paraiso Interior gravel race and place ninth at the Vuelta a Andalucía, the Kazakhstani rider has been away at training camps for much of March.

He was listed on the provisional start list for the Tour of Flanders, where he finished a career-best 14th in 2016, before he was set to take on the Ardennes Classics. However, a crash on the descent of Mount Teide put paid to his hopes of racing.

The 29-year-old was heading down the mountain last Saturday when a gust of wind took him down. He suffered a fractured collarbone and shoulder in the crash and looks set to miss the rest of the spring Classics.

EF Education-EasyPost have endured a tough Classics season so far, with the men in pink making little impact on the cobbles. So far, they lie a lowly 22nd in the UCI rankings, having picked up three wins so far in 2022.

Bissegger is responsible for one of those, the time trial at the UAE Tour, but he won’t be lining up at the Tour of Flanders in Antwerp on Sunday. The Swiss powerhouse fell ill at Paris-Nice and has now fallen ill once again.

Posting to Instagram on Thursday, he said that he felt sick at Gent-Wevelgem and hadn’t recovered at Dwars door Vlaanderen. “We decided to skip the Ronde on Sunday,” he wrote. “This is not how I imagined my Classics season, but that’s life.”

Quinn Simmons’ spot on Trek-Segafredo’s team was in doubt after he struggled in the last three Belgian classics. The American was one of many riders who got sick during the week of Tirreno-Adriatico or Paris-Nice and a DNF in Dwars door Vlaanderen on Wednesday knocked him out of the team, Trek-Segafredo confirmed on Thursday.

Simmons was on fine form during Tirreno-Adriatico, where he won the mountains classification after going on the attack several times. The winner of last year’s Tour de Wallonie and the 2019 Junior World Champion is seen as a future contender for the Tour of Flanders, but not this season.

Israel-Premier Tech’s Classics team, who came of age at Paris-Roubaix last year with two top 10 finishes, have endured little but bad luck so far this spring. Team leader Sep Vanmarcke has so far missed Opening Weekend with a cold before getting sick at training camp earlier this month., ruling him out of Nokere Koerse.

The team will be down sprinter Giacomo Nizzolo on Sunday. The Italian, who looked in good form at Milan-San Remo, was involved in a crash on the Poggio descent, ruling him out of the Classic Brugge-De Panne and the rest of the Belgian spring with a fractured bone in his left wrist.

Van Asbroeck, who finished eighth at Roubaix last year, is also out this weekend. On Tuesday the team announced would miss the rest of the Classics after suffering a superficial vein thrombosis [blood clot] in his arm after a crash.

Riders in doubt and others missing out

At time of writing, Van Aert is the biggest question mark ahead of the race. The Belgian was set to be the main favourite heading into the weekend before Thursday’s bombshell that he may not race.

Jumbo-Visma are set to give an update on Van Aert’s condition on Friday after he was forced to miss the team’s recon ride. Team directeur sportif said he was “not feeling really fit and he’s staying at home for that reason.”

Meanwhile, the women’s peloton has enjoyed a far lower attrition rate by comparison to the men’s. As of Thursday afternoon, all of the major contenders were still confirmed to be lining up to race.

In the men’s peloton, both Sep Vanmarcke (Israel-Premier Tech) and Yves Lampaert (QuickStep-AlphaVinyl) have already ruled themselves out as contenders for the title on Sunday. Both are coming back from illnesses, with Vanmarcke saying he hopes to be on form for Paris-Roubaix, while Lampaert has said, “I can ride tempo, but the explosiveness is not there. Sunday comes too soon for me.”

Former winner Alberto Bettiol (EF Education-EasyPost) is also making a return from illness, having been taken out of action by COVID-19 and ulcerative colitis at the start of March.

Elsewhere, world champion Julian Alaphilippe will not be part of the QuickStep-AlphaVinyl lineup for the race, despite some rumours to the contrary after he was spotted training in Flanders with team Classics leader Kasper Asgreen earlier this week.

Team DSM will be going without Søren Kragh Andersen at the race. The Dane has been in good form recently, finishing seventh at Milan-San Remo and fifth at Gent-Wevelgem, but looks to instead be prioritising the Ardennes Classics.

Gent-Wevelgem winner Biniam Girmay (Intermarché-Wanty-Gobert) flew home to Eritrea after his sensational victory at the race, opting against extending his spring once again in order to make his Flanders debut.

Finally, the in-form Max Walscheid (Cofidis) wasn’t on the provisional start list for the race despite winning the GP Denain and placing fourth at the Classic Brugge-De Panne. He’s out of action after being hit head-on by a car driver while out training last week.