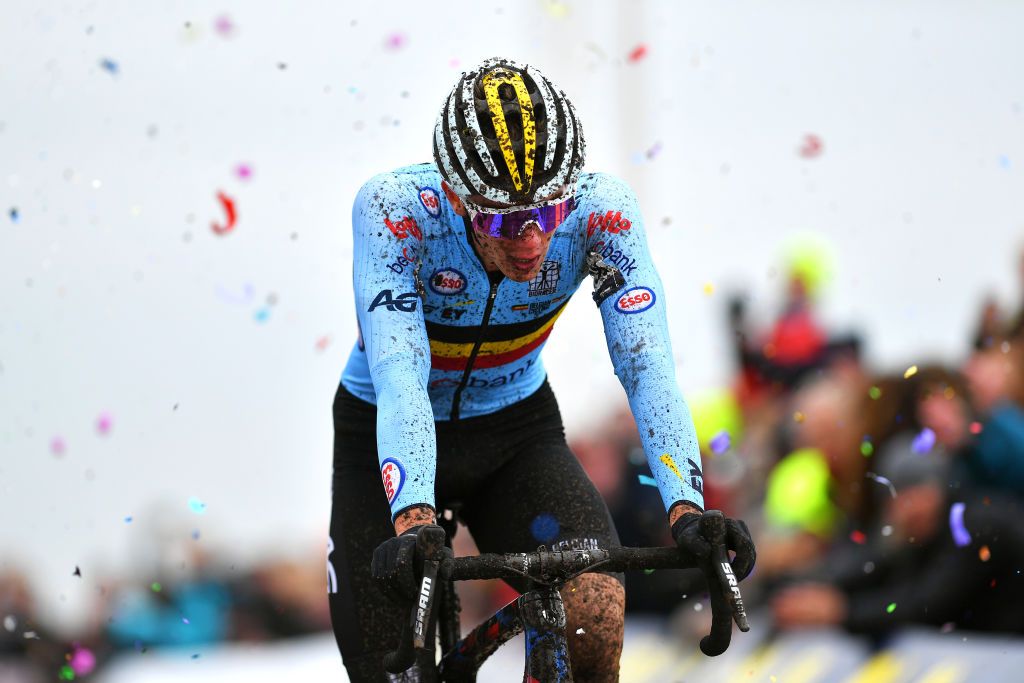 Thibau Nys (Baloise Trek Lions) had high hopes for his first appearance in the under-23 men’s race at the Belgian Cyclo-cross National Championships, but crashed out of Sunday’s contest in Middlekerke. A winner of the Belgian junior cyclo-cross title in 2020, Nys was in the top 10 of the 63-rider field when he went down hard and sought medical attention.

The injury to his left shoulder area was a great cause for concern, as he fractured that collarbone in October in a crash at the World Cup race in Waterloo, Wisconsin. Surgery to repair the break with a plate was performed in Belgium after a flight home, and Nys was back on the podium at the X2O series at Koppenbergcross three weeks later, where he finished third.

“Like the whole season, the sand was a disaster,” Nys told Het Laatste Nieuws after his day ended early. “I was driving on the left side of a track to get into the corner better, but I came on a little harder and drove into a deep hole and flipped loose. My own mistake. I collapsed completely, my back hurt.

“I now know how it feels, so I’m afraid I broke my collarbone for the fifth time. The [plate] is still there. I don’t know what that means, I’m not a doctor, but the chance that I will make it to the World Cup seems very small to me.”

The injury was assessed a short time later at hospital in Herentals, where he was taken by team doctor Jan Mathieu to see specialist Toon Claes.

“It is an AC subluxation, which is the joint that connects the collarbone to the shoulder blade. That joint was dislocated for a while, but he did not sustain a new fracture. He will have to rest for a while, but surgery is not necessary,” said Doctor Mathieu to Het Laatste Nieuws.

“The [plate] must have absorbed the shock. That was his luck. Otherwise we might have had a complicated collarbone fracture.”

The Baloise Trek Lions confirmed in a statement on its social media that Nys would not require surgery, but his recovery will be guarded closely over the next week to see if he can compete in the next World Cup stop in Flamanville, January 16. The injury puts his entry at the World Championships in Fayetteville, Arkansas in jeopardy as well, which follows two weeks after Flamanville.

“Thibau will not be operated on, but will be taped to aid recovery. Thibau will certainly fit for the World Cup round in Flamanville to be able to recover optimally. Over the next ten days, we’ll see how his recovery evolves,” stated his team.

Nys, the son of ‘cross legend Sven Nys, is the current U23 leader in the X2O Trofee series, having won the last three competitions in order, at Loenhout on December 30, followed by GP Sven Nys in Baal on January 1 and four days later in Herentals. He is the reigning junior World Champion, having won the 2020 event in Switzerland; the 2021 junior races were not held at Worlds because of COVID-19 precautions. Two seasons ago as a junior he also won the European Championship,  Superprestige series and World Cup title.