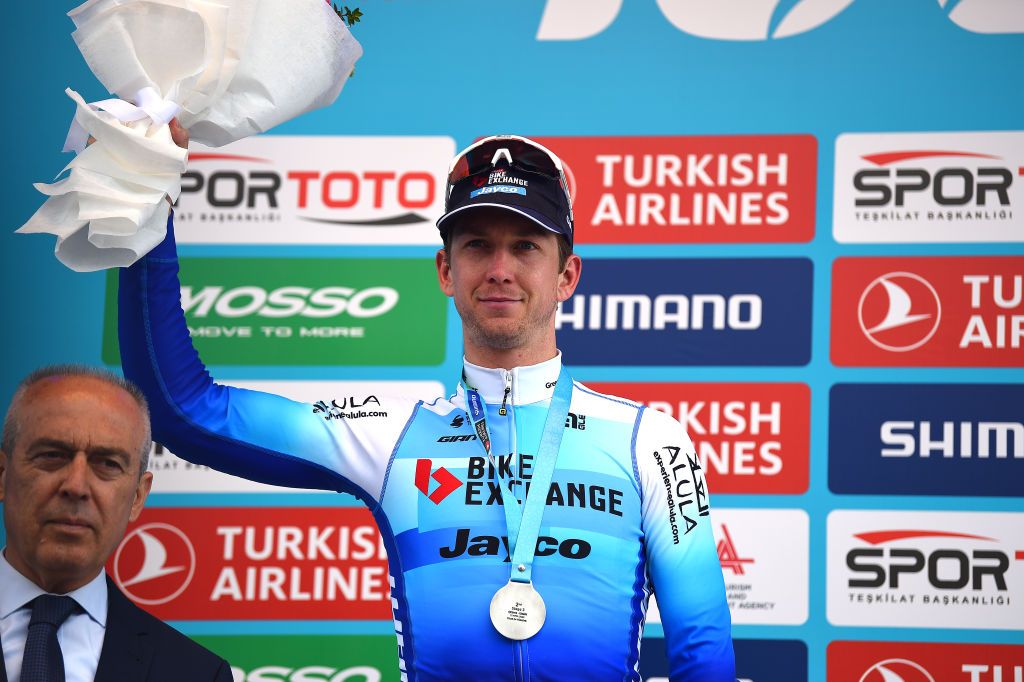 Last year it took nearly a whole season for Kaden Groves to visit every step of a podium but now the Australian sprinter has amassed a first, second and third at the Tour of Turkey alone, even though the race is only three stages in.

The 23-year-old BikeExchange-Jayco rider started with a third place on stage 1 and then skipped straight to the top step – of both the stage and overall – when he came out from Jasper Philipsen’s (Alpecin-Fenix) wheel to take victory on stage 2. Groves then completed a full round of the podium steps by taking second on Tuesday, when Philipsen turned the tables in a tight battle.

“I can’t fault the guys again today, I think it’s been a really great week so far,” Groves said in a statement after stage 3. “Again we showed today that we are super organised in the lead out and everyone did a really good job.

“In the end I was simply beaten by the faster man.”

The second place delivered Groves his tenth trip to the podium so far this year, which means he’s more than doubled his podium tally of last season already. The same goes for his win tally, with the stage 2 victory being his second of the year – the first coming at Volta a Catalunya.

The Queenslander’s turn around began at the end of the 2021 season, as the rider started to bounce back from a series of setbacks and delivered his first European victory in September. Before that the rider – who delivered his first international victory in China when he was 18  – hadn’t stood on the top step for an individual victory since February of 2020 when he won two stages of the Jayco Herald Sun Tour in Australia.

The flow of podium results from Groves this season has firmly ensconced the rider as a valuable part of BikeExchange-Jayco’s strengthening sprint group, with Dylan Groenewegen joining the team at the start of the season after the return of Michael Matthews in 2021.

Groves was also in the lead of the overall competition at the Tour of Turkey after his stage 2 win, but the second place on stage 3 did mean he had to hand over the turquoise jersey of the race leader to Philipsen.

Still, it’s not something the BikeExchange-Jayco rider was expecting to be able to hold on to for too much longer anyway as, while Groves has shown he can hold on through some climbs, the summit finish of stage 4 is expected to shuffle even the hardiest of fast finishers down the overall results table of the eight-day race.

The sprinters are expected to have to wait to take their chances on the stage 5 finish line at Ayvalık.

“We’re confident going forward, we have the GC stage tomorrow with Kevin [Colleoni] and we’re taking each day at a time and things are looking good,” said Groves. “Everyone stayed upright today, no crashes, we’re all healthy and ready for the rest of the week.”