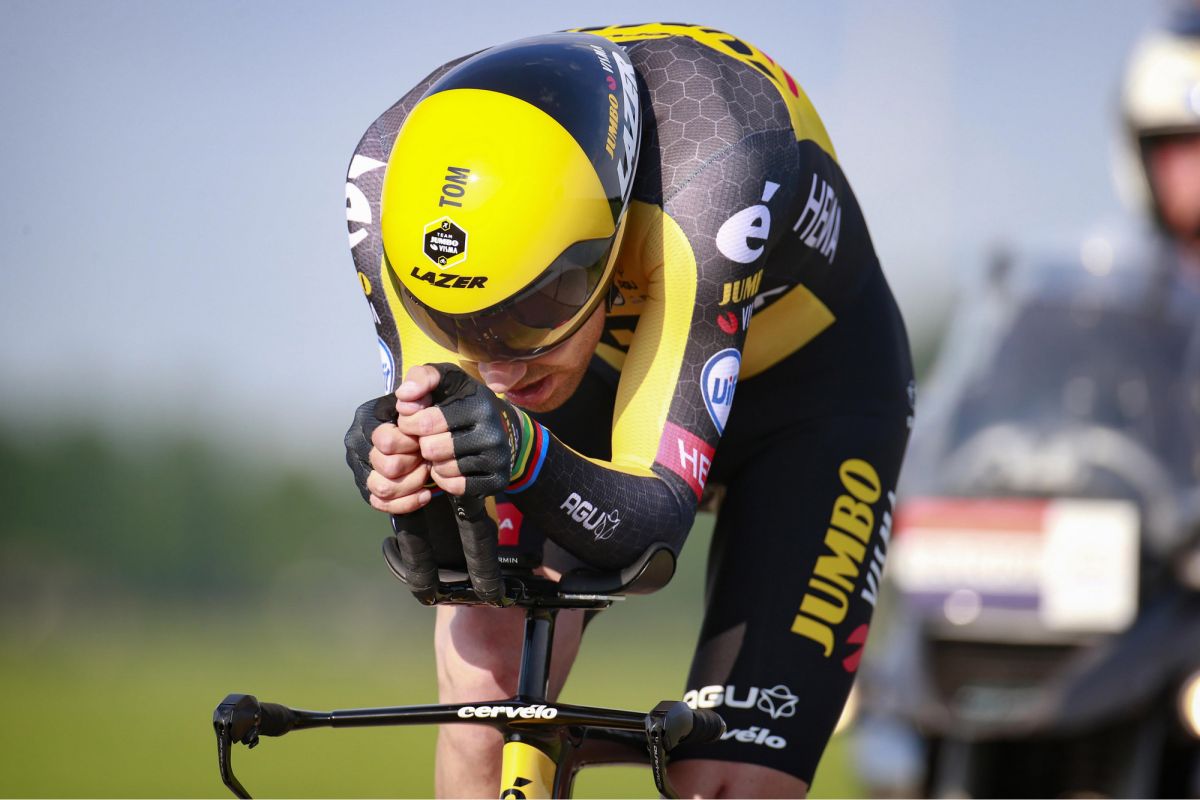 Tom Dumoulin (Jumbo-Visma) makes his return to racing at the Benelux Tour on Monday, a month on from the Tokyo Olympics, as he ramps up his preparation for the Road World Championships in Flanders at the end of September.

The Dutchman will be among the favourites at the week-long stage race, which he won back in 2017, and will be looking for his second victory of the season during the stage 2 time trial in Lelystad.

He told WielerFlits that the time trial will be a “measuring moment” for him at the race, which will see him and teammate Mike Teunissen share a free role for the Dutch squad.

“That’s a first real measuring moment for me. It’s not a time trial that suits me super well, but every time trial makes me happy,” Dumoulin said. “Of the GC riders, I am one of the better men against the clock, so I will definitely try to take time.

“But there are also specialists here in this shorter time trial, with only long straight roads. Those guys are normally better than I am. I’m just going to accelerate and see. But I am also looking forward to the Houffalize stage in the Ardennes and the final stage around Geraardsbergen. These are stages that should suit me well. Hopefully I can compete for the prizes then.

“Mike and I both have a free role. With Dylan Groenewegen, we try to score in the sprint stages, and we will play a role there as well. Mike is doing really well; he has also gained confidence the past few weeks. For me, it’s really a bit of a mystery where I stand exactly. We’ll both try and keep our place in the standings and then we’ll see at the weekend.”

Dumoulin said that his form heading into the race is unknown but added that he’s confident he’s going well. Following a short break from the bike after the Olympics, he’s been back training for several weeks ahead of the Benelux Tour.

“Because I really made the Olympics a goal, I took a short break afterwards. The last few weeks I have been training full speed at home with my focus on the Benelux Tour. In the training it felt fine, so in that respect I am really looking forward to this week.

“It’s just that when you haven’t raced for a while like I have, it’s hard to say if your form is good or really super to fight for the top placings. But I’m not going to end up in the last group here, I know that.”

The race, which runs from August 30 to September 5, is Dumoulin’s last tune-up before the Worlds next month – including the time trial on September 22. However, the 43.3-kilometre course to Bruges, which is largely flat, isn’t fully suited to him, Dumoulin said.

He’ll also take on the road race alongside team leader – and one of the overall favourites – Mathieu van der Poel. Dumoulin said that he himself isn’t among the top favourites for the rainbow jersey but added that “a lot is possible” on a tough hilly course.

“It is quite difficult with lots of twists and turns. I once rode the GP Jef Scherens. Then I felt all those climbs towards the end, you know. So the Worlds is going to hurt at the end of 250 kilometres of racing.

“Of course, I am far from top favorite, but on a course like that, a lot is possible. Especially if you have good legs and are in the race, who knows. I don’t have a sprint and I’m not a top favourite to ride away on a climb. But if I can keep up and I get a chance somewhere, they won’t take me back just like that.

“After the Worlds I will ride a series of Italian races and that’s it for this season. Beyond that I haven’t looked yet. That worked well at the Olympics. What’s in the barrel for next year, we’ll see after the season. That works for me. In the past, I sometimes looked years ahead [but now], short-term thinking suits me fine.”