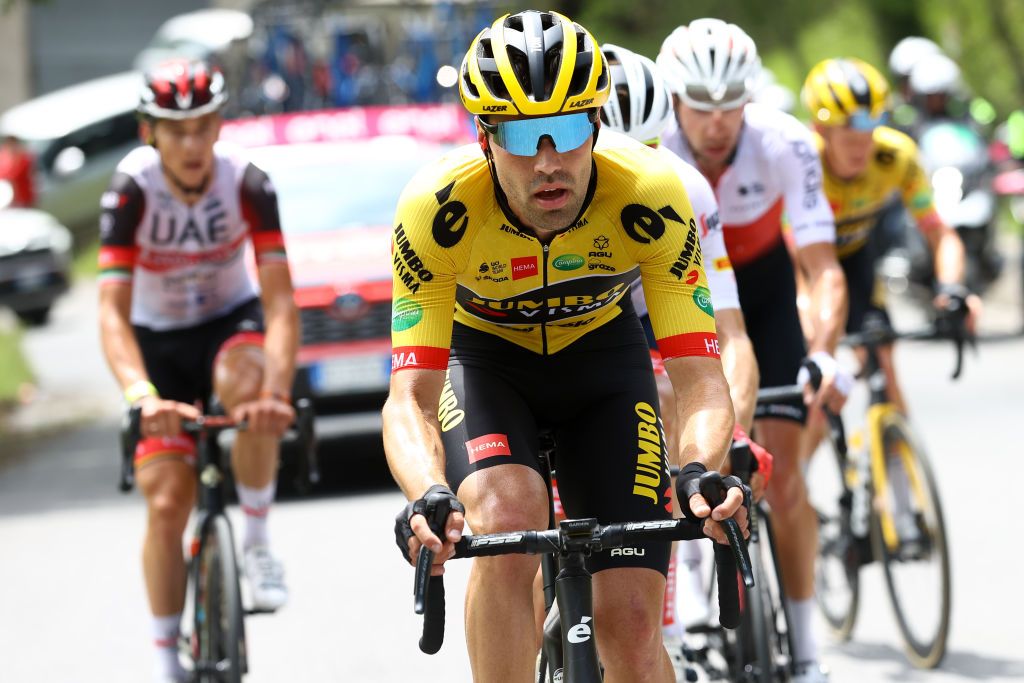 Tom Dumoulin’s preparation for this Giro d’Italia was meticulously plotted. Two training camps, one in Colombia and the other on Mount Teide, were key landmarks on his long road back to challenging in a three-week race. Data was parsed and analysed. Strategies were discussed and assessed.

And then, halfway up Mount Etna on stage 4, all those plans went up in smoke. Dumoulin was distanced from the group of overall contenders. Ten metres on the climb’s steepest slopes became 10 minutes by the time he reached the barren summit. What now?

When Dumoulin lined up in Diamante on Friday morning for the start of stage 7, he still seemed to have no firm ideas about how to approach the remainder of his Giro. Asked if he might try his luck in the break on the rugged run through the southern Apennines towards Potenza, he insisted that he would not.

And yet, midway up Monte Sirino, Dumoulin found himself forging across to his teammate Koen Bouwman and the break of the day with more than 120km still to race. He didn’t ask himself how he got there. After months of planning, he was simply improvising as he tried to deliver a stage win for Jumbo-Visma, whose other GC leader, Tobias Foss, also shipped time in Sicily.

Initially distanced as the four survivors of the break hit the final ascent in Potenza, Dumoulin doggedly chased back on in the final 3km and then led out Bouwman to win the uphill sprint ahead of Davide Formolo (UAE Team Emirates) and Bauke Mollema (Trek-Segafredo).

“Fuck, that was good,” Dumoulin said as he embraced Bouwman past the finish line. At the Jumbo-Visma bus on Viale Mediterraneo, meanwhile, the celebrations seemed to be for Dumoulin’s redemption as much as for Bouwman’s win.

“That was really not the plan, but I just found myself in there suddenly,” Dumoulin said of his presence in the day’s break. “I was actually protecting Koen’s break. He was gone with four riders, but they started jumping behind and I jumped with them. Suddenly we had a gap and I found myself in the break. That was really not the plan, but I’m really happy that I went in.”

On the final classified ascent of La Sellata, Dumoulin made several attempts to forge clear alone, but he later stalled the front group to allow the dropped Bouwman latch back on. As the finale in Potenza drew nearer, Dumoulin placed himself in Bouwman’s service, a function of his own fatigue as much as his teammate’s finishing speed.

“We were working for each other a little bit, but then I felt my powers going down a bit in the final, which is also OK,” said Dumoulin, who had seen Bouwman’s turn of pace up close during their sojourn in Colombia early in the year.

“He’s so fast, I know that from training. We did a couple of training camps together and we went to Colombia together, the two of us. He’s super fast and he was feeling good, so I’m really thrilled for him.

“He’s one of the riders who deserves it the most in the whole bunch. I knew he was going to be the fastest, so getting him to the line to be able to sprint for the win was the first objective.”

Dumoulin crossed the line in fourth place with his arms aloft, 19 seconds down on Bouwman. The maglia rosa group passed the same point just under three minutes down, and so Dumoulin climbed a dozen places in the overall standings. He now lies 32nd overall, 5:40 behind pink jersey Juan Pedro López (Trek-Segafredo) and just under four minutes down on Simon Yates (BikeExchange-Jayco).

If Dumoulin’s travails in Sicily were simply an off-day, then he might rise further in the standings when the race tackles the Blockhaus on Sunday, but he quickly dismissed the idea that he would harbour any general classification ambitions in this race.

“GC is not my place. I’ve pulled back time today, but I’m out of it,” Dumoulin said. “But even with today’s legs I wouldn’t be in the top three in the standings. But it’s getting better, and I hope I still have two great weeks ahead of me. I always like to give my best in Italy. I was very disappointed after the Etna stage. Now I have to take the Giro day by day, but we hope to have more days like this.”

Asked if he had his confidence back, Dumoulin smiled: “Well, at least I’m very happy now.” It brought to mind his words in Budapest on the night before this race started. “A happy man goes a long way,” Dumoulin said then. His Giro has some distance left to run yet.