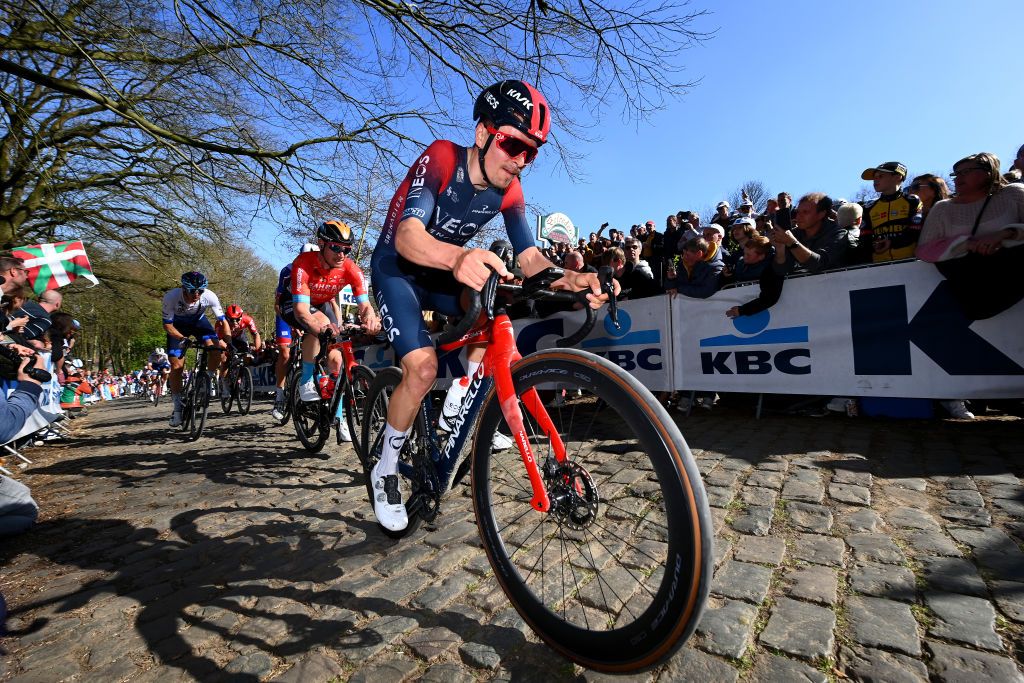 Tom Pidcock made a surprise comeback to racing at Gent-Wevelgem on Sunday, but the Ineos Grenadiers rider revealed his stomach issues are ongoing after a subdued display, relatively speaking.

Pidcock, who was forced to miss Strade Bianche and then abandoned Milan-San Remo due to digestive problems, returned to racing at Gent-Wevelgem, a race that wasn’t even on his original schedule.

He took heart from the fact that he finished the 250km race in 67th place, but that in turn suggests he’s a long way off his best form just a week out from the Tour of Flanders.

“It was a hard day but I’m quite pleased with how it went for me. I finished which is good sign for what’s to come,” Pidcock told assembled reporters, including Cycling News, after the finish in Wevelgem.

“I think it shows I’ve lacked a lot of racing. Today I was suffering. But it’s a good start. It gives me a good base. I went full gas today. Even when I was dropped I went full gas just to see where I was. And I’m quite far off but it is what it is. I’ve got to look on the positive side.”

Pidcock was caught behind the mass crash with just over 100km to go but managed to get back on and even had a strong showing on the first of the three ascents of the Kemmelberg. However, he was soon in trouble, and wasn’t able to match the strongest contenders on the following two ascents up the steep cobbled climb.

After the second one, he attacked from a chase group but the race came back together. On the final ascent, however, he was dropped for good from contention.

The big question mark surrounding Pidcock is the underlying cause of his stomach issues. He said he lacked racing, but also revealed that he was struggling to digest food, especially deep into races.

“I have good shape. I think it’s just my stomach, maybe it can’t take the carbs in at the end of the race and I suffer for that,” Pidcock said.

Last week he underwent blood tests, which have so far proved inconclusive.

“I did blood test and few other tests. To be honest, I don’t really know the details. It’s not normal, but we do what we can to fix it,” he said.

“We’re not really sure. My liver is a bit… not processing things very well and it just takes time to heal. In the past when I had stomach issues when I was younger, it hit me quite hard, so yeah, it is what it is.”

With just a week to go until the Tour of Flanders, Pidcock appeared pessimistic about his chances of fighting for victory in the Monument. He’s racing again at Dwars door Vlaanderen on Wednesday in what will be a key mid-week indicator.

Being below par at Flanders would be a blow but Pidcock still has the Ardennes Classics to think about before the month is out, with an early Amstel Gold Race coming up on April 9 followed by La Flèche Wallonne and Liège-Bastogne-Liège later in April.

“Honestly, I don’t know when I’ll be back to my normal self,” he said. “But I will do what I can and hopefully it’ll be as soon as possible.”